“In the 1910s and 1920s, a number of African American women poets and authors turned to drama to address racial violence. Writers such as: Angelina Weld Grimké, Alice Dunbar-Nelson, Mary Burrill, Georgia Douglas Johnson, and Myrtle Smith Livingston were among these writers who did so. With the majority of these Black women living in the heart of Washington, D.C. they were constantly confronted with symbols of democracy that they found their lived realities falling outside of. These women contributed to the genre now known as lynching dramas.” – HowlRound

“[Clara Porset] is at the heart of an ongoing exhibition at the Art Institute of Chicago that looks at the ways in which six Modern artists — all women — were engaging Mexican art and crafts in the middle of the 20th century. … These were figures who blurred the line between art and design and between craft and industrial production and who, in the process, helped make international Modernism more Mexican.” – Los Angeles Times

“The HBS Club of Chicago – Nonprofit Leadership Fund, Community Impact Scholars Pilot Program has sent its first participant to the Harvard Extension School (HES) for leadership development. … [The first Community Impact Scholar is] Founding Artistic Director and CEO of the Red Clay Dance Company, Vershawn Sanders-Ward. … The Red Clay Dance Company’s goal is to awaken ‘global’ change through creating, performing, and teaching dances of the African Diaspora with the hope of transforming cultural and socio-economic inequities in local and global communities.” – AfriClassical

The court that had sentenced Altan, along with his brother and one colleague, to ten years in prison (on a charge of assisting the attempted 2016 coup that many believe was trumped-up) ordered them released under supervision last week. But the chief prosecutor appealed that decision, and police promptly went to detain Altan again. – Yahoo! (AFP)

The Lena Horne Prize for Artists Creating Social Impact, sponsored by the Town Hall in New York City, “will recognize those who ‘promote awareness and create social change.’ The inaugural winner will be honored in February. The recipient will receive a $100,000 donation to be directed to a charity of their choice.” – Yahoo! (AP)

“The United States has never been totally segregated, but this new world exposes everyone to everyone else in unprecedented intensity. Just like we sound like our friends, just like someone with a new friend group will inevitably find bits of new language and inside jokes slipped into their own speech, vernacular from here and there and wherever sneaks into conversations between people who’ve never been to those places.” – Public Books

Netflix can deliver filmmakers a prospective audience of 300 million people (and growing) with each release. This film distribution strategy is enabling rich, diverse stories to reach a massive audience. And that should be celebrated as a win for movie lovers — and the movie business. – The Hollywood Reporter

“Classical materials have been present in the identity construction and psychological experience of substantial groups of working-class Britons. Dissenting academies, Nonconformist Sunday schools and Methodist preacher-training initiatives all encouraged those who attended them to read widely in ancient history, ideas and rhetorical handbooks.” – Aeon

When I was growing up, every major American metro area had both a polite press—the local dailies—and a rude one: the alt-weeklies. The alt-weeklies were funded by advertisers the family-friendly media wanted nothing to do with. In the end, many of these publications were also simply killed by rich idiot owners or corporations that routinely purchase publications and ruin them out of both greed and incompetence. And so we (mostly) don’t have alt-weeklies anymore. – The New Republic

“It could be a dream or a nightmare. You’re 84. What would it be like to have an artistic conversation with your 30-year-old self? [Rainer] is finding that out as she reconstructs, in collaboration with Emily Coates, Parts of Some Sextets, which she created in 1965 for 10 performers and 12 mattresses. A complex braiding of movement, text and, yes, mattresses, it builds an invigorating labyrinth of choreographic activity.” – The New York Times

“To Oz, writing in Hebrew was like sculpting in solid rock and crusted sand at the same time. With one foot in the Hebrew of the Bible and the other in the mélange of linguistic influences that made up the vernacular in a young country of immigrants, the language could make a speaker prone to making missteps of word choice: ‘you don’t want to bring in Isaiah and Psalms and Mount Sinai’ to describe an argument over pocket change.” – The New Yorker

“It was both a destination for tourists and it was also our hub, and so we wanted to keep it close to the theater district. And, too, we’re in the business of creating community, and that’s another thing the Drama Book Shop does, and that’s incalculable — I can’t tell you how many creative teams on theater companies say ‘Let’s go meet at the book shop and talk there’.” – The New York Times

“At a table reading of Live Bodies for Sale, a new docudrama about human trafficking in Northeast Ohio, playwright Christopher Johnston addresses the assembled cast and crew. ‘Everybody in this play is real,’ he says. ‘The characters, their monologues, are all taken from what these people have said to me in the time I’ve spent with them. We want to tell their stories.'” – American Theatre

“As one editor who has been doing this type of work for 30 years and worked for nearly every major studio in Hollywood tells InsideHook, ‘The studios, outside of the creative groups, are full of people who have zero interest in or understanding of the creative process. They are pushing widgets. … Compromises are made in the name of cost. ‘The scene has nudity AND a key story element? Cut it!”” – InsideHook

“I find this is a difficult institution to get air time in because we don’t talk about the art first. Nobody ever talks to me. Barely. There’s no place to actually say these things safely, so I’m going to say them here.” – Baltimore Sun

“[He] helped sculpt the rich and quietly splendorous sound of ECM Records, an influential label that has produced timeless jazz and contemporary classical recordings.” – The New York Times

Yes, scofflaw diplomats have been a problem for ages (ask any New Yorker who’s been clipped, or worse, by a UN delegate’s car), but over the past few years, artworks have been disappearing from certain embassies in Cairo, DC, Moscow, and other capitals. Some appear to have vanished without trace, and others have turned up at auction houses. – The Art Newspaper

“As one of the first initiatives under the leadership of new CEO James Daunt, Barnes & Noble has announced the shortlist for a new Book of the Year award. Books are nominated by B&N booksellers, who will also choose the winner. Booksellers are ‘voting for the title for which they are most proud to be selling,’ said Daunt,” who launched a similar prize at the UK chain Waterstones in 2012. – Publishers Weekly

“In a collaboration influenced by [music director Gianandrea] Noseda’s role as principal guest conductor for the London Symphony Orchestra, the British symphony’s record label — LSO Live — will distribute the NSO’s new label.” The first release, with Dvořák’s Ninth Symphony and Copland’s Billy the Kid, is due on February 21. – Washingtonian

The Wife of Willesden will be a monologue giving Smith’s modern spin on The Wife of Bath’s Tale from Canterbury Tales. The piece will premiere next year in her home neighborhood, the northwest London borough of Brent, as part of its programming as London’s Borough of Culture. – The Guardian

BBC arts editor Will Gompertz: “It has never been an easy task, but … what has become absolutely clear over the past 12 months is that arts organisations have to up their game when it comes to basic due diligence before accepting a sponsor’s money. It is no longer good enough to check the credentials of the sponsoring company. They now have to make sure the personal values of those who run and own it are compatible with their own charitable objectives.” – BBC

Best known in the U.S. for his years as assistant and associate conductor and conductor-in-residence with the Philadelphia Orchestra and as music director of the Cabrillo Festival of Contemporary Music, Măcelaru is currently chief conductor of the WDR Symphony Orchestra in Cologne. He succeeds Emmanuel Krivine at the ONF in 2021. – OperaWire

At last week’s very sparsely attended press preview for this week’s major auctions, I got a chance to chat about Sotheby’s era of uncertainty with four of the company’s principals. – Lee Rosenbaum

The Estonian kannel is primarily a plucked folk instrument, but these two young ladies — both of whom have studied music academically — had not played it until they found one, and decided to see what would happen if they approached it fresh. Their outside-the-box attitude here yields unexpectedly sophisticated and orchestral arrangements. – Michal Shapiro

“I’ve written for every reputable publication in town. For as long as I’ve been attending theater in the city, my name and brown skin have made me the target of bullies and racists. I’ve been asked if I’m with the catering staff at theater critics events, been chastised by angry ushers to turn my cell phone off, even if I have never taken my device out of my pocket during a performance, and often been asked if I’m sure I belong in the orchestra, as ushers point me to the mezzanine. My skin has become so thickened by the mistreatment and rudeness of theater employees that I might as well be a walking callus.” – Broadway News

Having been fished out of the Moika River early Saturday morning with a backpack containing a woman’s severed arms, he was in the Mariinsky Hospital, still very much alive but recovering from hypothermia and facing a murder charge. – Washington Post 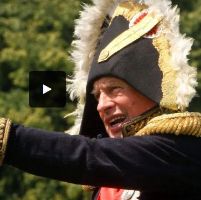