In Mexico, street clowns are beloved – and they can actually make a living. Jonathan Coumes visits with a trio of them in the city of Querétaro.

Kwame Anthony Appiah, from this year’s BBC Reith Lecture: “I think you should give up the very idea of western civilisation. It is at best the source of a great deal of confusion, at worst an obstacle to facing some of the great political challenges of our time.” For a start, what exactly is “the West”?

“If anyone take away this book, let him die the death; let him be fried in a pan; let the falling sickness and fever size him; let him be broken on the wheel, and hanged. Amen.” Yes, this was a real thing.

With a battle on several fronts – get more women on stage; make sure their characters are real, not caricatures; get more women into directing, etc. – what is the state of theatre for women characters in general? One playwright: “Probably the best decision every writer can make is to cultivate a loyal group of friends who are much smarter than you, whose feedback you trust, and who will tell you, ‘This is bullshit.'”

It’s not – or not just – because some people [fidgets nervously] are lazy procrastinators: there’s a more benign, and basic, explanation.

“A novel written in a single sentence” – Mike McCormack’s Solar Bones – “has won the 2016 Goldsmiths prize, becoming the third Irish winner in the four-year history of an award set up to reward fiction that ‘breaks the mould or opens up new possibilities for the novel form’.”

“The revamped Arts front page will have no more than three stories (there now are sometimes as many as six) anchored by an oversize photograph, according to sources who have been apprised of the changes. (Today’s Arts section is a good example of what the section will more typically look like.) Critics have been urged to stop covering events least likely to appeal to online subscribers: indie movies having brief runs in art houses; one-night-only concerts, off- and off-off-Broadway shows that aren’t star-driven, cabaret performances, and small art galleries. Many of the Times‘ contingent of freelance contributors, who provide much of that coverage, are likely to meet the same fate as the regional freelancers last summer. But even staff critics have been given the same marching orders, telling Deadline they are being pressured more frequently by editors to focus on higher-profile events.”

“If Netflix or Amazon can control how our perception of how popular a TV show is – how many people are watching it – that controls the TV industry. So that controls what kind of shows the viewer ultimately gets to see. Right? And there’s other people, actors and producers, they want to get paid. And they also want people to recognize that they’re creating shows that are popular.”

George Lucas’ much-travelled museum project proposal made a stop in Los Angeles Wednesday, and LA County supervisors embraced the project. The LA proposal would put the museum at Exposition Park next to USC. But wait, you ask, wasn’t the project going to be located in Chicago? Then the Bay Area? Sure – so what is it about the Lucas museum that can’t quite find a landing spot?

Given the ubiquity and popularity of movies, it’s easy to imagine that there’s some sort of central repository for all the movies ever made. But in fact, old movies disappear all the time, and sometimes it’s only because some obsessive collector found and saved a movie that it still exists.

The airy study and the quiet afternoons look awfully nice in the videos, but the life described by my correspondents was one riven by fever and fret, a life of staving off panic and the harsh voices in one’s head. Don’t believe the videos: The most famous writers in the country can’t get over their divorces and take a lot of pills.

Nicholas Barber: “Yes, it has James Crabe’s superb Steadicam shots of Rocky Balboa mooching around the industrial sites and working-class neighbourhoods of pre-gentrification Philadelphia. And, yes, it has Stallone’s heart-swelling sprint up the steps of the Philadelphia Museum of Art to the accompaniment of Bill Conti’s irresistible funk-fanfare. But for every terrific moment you remember, there is another terrible one you may have forgotten.”

There was some concern among conservationists about this project, because the last two restorations of the painting didn’t work out so well.” But they went ahead because the work was “probably the most varnished painting in the Louvre’s [entire] collection.”

“In that era of portable cameras and fast film stock, his simplified approach to filming and imaginative use of natural light broke with traditional aesthetics, in particular the polished images of the 1950s cinéma de qualité in France. He was identified most with the director Jean-Luc Godard, and Coutard’s direct and unorthodox, yet highly inventive, photography became a pure expression of New Wave values.”

The owners of a house in Toulouse found it when they went up to fix a leak in the roof. Milan’s Pinacoteca di Brera museum is now showing it alongside a different copy of the same image – Judith Beheading Holofernes – by Caravaggio disciple Louis Finson.

The University of Cape Town told the company to move out after students protested ballet as “Eurocentric and colonial”; the dancers claimed they were physically threatened. For now CTCB is using a studio at the back of its performance venue, but the executive director says they’ll have to close entirely if they don’t have a home by January.

Poor Townhouse. First the police shut it down because – well, because that’s what military dictatorships do. Then the walls fell in, literally. In February the staff returned to work but weren’t allowed to present anything. Now, finally, there’s a new space and new activity.

What is our “Great Work” in light of this election?

Several hours ago now, Donald J. Trump was elected the forty-fifth President of the United States. I haven’t slept in 36 hours. As the results of the election became clear, more than a few theater friends on my Facebook feed began to post the words: “The Great Work Begins” … read more

“Austria’s criminal intelligence service announced this week that it had uncovered a group selling forgeries of high-profile art, including fakes that had been attributed to Chagall and Picasso.” The ring’s stash in Slovenia included fake Klimts and Monets as well.

“After 82 years of partnership, Cape Town City Ballet has been booted out of its University of Cape Town premises because ballet is ‘Eurocentric and colonial’. Company members said they had to rush in to clear out their lockers after they were told it was ‘unsafe’ for them to be at the university.” 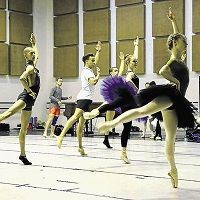