“Opening Tuesday at the Geffen Playhouse, The Thanksgiving Play centers on a group of ‘woke’ white thespians who struggle to devise a historically accurate and culturally sensitive elementary school pageant that celebrates both Thanksgiving and Native American Heritage Month. Since premiering last fall at New Yorks Playwrights Horizons, the work has been a hit, landing among American Theatre magazine’s annual ranking of the 10 most produced plays for the 2019-2020 season.” – Los Angeles Times

“There have been a couple of studies done with populations of indigenous people who live in places where there is very little background noise and elderly people in those populations tend to hear as well as infants do.” – NPR

The artists’ collective APY has warned the Australian federal and South Australian state governments that certain outside art dealers, referred to as “carpetbaggers,” have been manipulating some artists’ family members into debt and then taking those artists away from their families and homes and forcing them to make paintings to pay off that debt. – The Guardian

It was ten years ago that the Palau de la Música Catalana’s name was all over Spain’s newspapers: €24 million had disappeared from the hall’s bank accounts in a corruption and kickback scheme that involved the Palau’s director; the president of Orfeó Català, its resident choral society; the transportation and infrastructure giant Ferrovial; and one of Catalonia’s major political parties. Here’s the story of how the crime was discovered and solved and how the Palau and Orfeó redeemed their reputations. – Bachtrack

Back in the 1990s, videographer Frederick Allen documented the salvage of the pirate Blackbeard’s 280-year-old wrecked ship on the North Carolina coast. Earlier this decade, a department of the NC state government used some images and video of Allen’s without permission or payment — and, when Allen sued, the state legislature passed “Blackbeard’s Law” to exempt the state government. Allen’s consequent federal lawsuit has now made it to the Supreme Court, and reporter Eriq Gardner lays out the somewhat tricky legal issues involved. – The Hollywood Reporter

The American Bible Society is building a $60 million museum, roughly halfway between Independence Hall and the National Constitution Center, that it’s calling the Faith and Liberty Discovery Center, whose exhibits will focus on the role of the Bible in the history of the United States and its social and political movements. The ABS is billing the Center as for “people of all faiths and no faith.’ Alaina Johns asks just how sincere that billing is and wonders how welcome such a museum should be at the nation’s birthplace. – Broad Street Review (Philadelphia)

A tersely worded email sent to employees at 6:13 p.m. Tuesday stated that attendance was low and that the museum would be closing its current exhibition effective Wednesday. – Los Angeles Times

The works have been organised into themed categories, such as identity, adventure and love, sex and romance. – BBC

Cave art had a profound effect on its twentieth-century viewers, including the young discoverers of Lascaux, at least one of whom camped at the hole leading to the cave over the winter of 1940–41 to protect it from vandals and perhaps Germans. More illustrious visitors had similar reactions. – The Baffler

Popular music aesthetics did much more than invert or blur the line between high and low culture. Instead, it provided the grounds for a thorough fracturing of those two positions into a new, intricate system of orders and relations. – LitHub

Some attribute the Kusama craze to the Instagram generation, with young people lining up to take selfies in the artist’s “Infinity” rooms of mirrors, colors and lights. Others say her compelling personal story as an Asian woman who first traveled alone to the United States and has openly battled her demons (she lives in a Tokyo psychiatric institution) is resonating amid today’s heightened sensitivity to issues around identity politics, immigration and mental health. – The New York Times

“Over a career spanning 50 years, [Juan Carlos] Onetti depicted Uruguay in short stories and novels as a place marked by pettiness, idiocy and squalor — a Gogolian province in the tropics [sic] — and populated by characters who are by and large unhinged. However unflattering, his portrait of his country was one in which Uruguayans recognized something of themselves.” – The New York Times Book Review

After Christina Randall was released from jail after a three-year term for battery and robbery, she finished a bachelor’s degree and hoped to get into social work — but with her incarceration history, she couldn’t get hired. So she started a YouTube channel on which, “in addition to sharing beauty tips, … she also talks candidly about life behind bars and the process of re-entry” to more than 400,000 subscribers. – The New York Times

Felicia Fitzpatrick: “With its European roots, ballet has always valued Eurocentric body shapes and skin color, leaving little opportunity for Black ballerinas to even attempt to engage with the art form. Even if they were allowed to participate, they were still othered and singled out for their race.” – Zora

“As a playwright Mr. Branch delved into the black experience, both in the 20th century and earlier, in Off-Broadway plays like A Medal for Willie, about the bitterness that ensues when a black World War II veteran who had been mistreated in the service is decorated posthumously; A Wreath for Udomo, with its theme of colonial oppression in South Africa; and In Splendid Error, about the tangled relationship between the abolitionists Frederick Douglass and John Brown.” – The New York Times

“Mr. Gaines, who spent his first 15 years on a plantation near Baton Rouge, later moved with his family to Northern California, but in many ways he never left the landscape, rhythms and painful history of his childhood. … In eight novels and many short stories, Mr. Gaines created a fictional world surrounding a town called Bayonne, in St. Raphael Parish, not unlike his boyhood home.” – The Washington Post

Lionheart, by director Genevieve Nnaji, includes only 11 minutes of dialogue that aren’t in English. A statement from the Academy said that even though the name of the category was changed this year from Foreign Language Film to International Feature Film, the rules have not changed, and they require that a candidate film must have “a predominantly non-English dialogue track.” – The Hollywood Reporter

Gia Kourlas: “He had a different partner this week because his regular one, Lindsay Arnold, had a death in her family. It didn’t make his dancing better or worse. It remains consistent in its awfulness.” – The New York Times

Situated along the banks of the Huangpu River on Shanghai’s version of Museum Mile, the new outpost is a collaboration with the West Bund Group, a Chinese state-owned development corporation that together with the local government has reportedly invested more than $3 billion in recent years to transform a former industrial neighborhood into a 7-mile waterfront cultural corridor. – The New York Times

The first Wal-Mart outside Arkansas opened in 1968 in Smalltown, U.S.A. Its record section had three bins of classical albums, many of them from Victrola, RCA’s budget line, which featured reissues from the golden age of 78s. For me that meant, first and foremost, the man B.H. Haggin called the greatest of all orchestral conductors. – Terry Teachout

Says Billington, who began at the paper in 1971 and has written roughly 10,000 reviews, “I shall shortly be 80 and, with the years, the stress of writing to a deadline doesn’t get any easier. Giving up will be a wrench but I feel now is the right time to do it.” (And yes, the paper will hire a successor.) – The Guardian 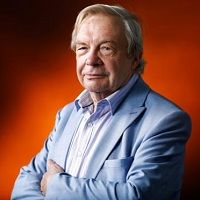