Brooke Mosay Ammann: “In 2018, First Nations Development Institute and Frontline Solutions released We Need to Change How We Think, a report that served as an introductory communication bridge between philanthropy and Native organizations. I want to further the conversation by including the perspective of a particularly well-developed Native organization, Waadookodaading Ojibwe Language Institute (WOLI), both to make general observations and to highlight some that are specific to indigenous language and culture revitalization.” – Nonprofit Quarterly

David Dower: “[Foundry co-founder Melanie Joseph has] been so far out in front of the field for thirty years, in a place the American theatre — with its templated, collectively bargained language, practices, and values — can’t reach. And she’s been urgently trying to make herself understood — about what she sees, what she’s learned, and what we could dream, make, become, and do if only we could follow what she was saying. … [Now] Joseph has released a book — a collection of essays from various authors that makes startlingly clear not only what was accomplished but, more crucially, what was attempted.” – HowlRound

“Much of [Mary Frances] Whitfield’s work depicts these stories from the days of slavery] — of picking cotton, singing songs, and other images of life for black Americans in days past. But Whitefield’s art shifted when she made a trip to the Birmingham Civil Rights Institute in the early 1990s, where she saw images of lynching and the Ku Klux Klan. Whitfield could not shake the images and the feelings they produced in her mind. So she began to exorcise them the only way she knew how: by painting them.” – PBS NewsHour

The violence, the hopelessness and the misery in the slums of Rio de Janeiro are all a direct result of the lack of guidance, role models or future prospects — except drug trafficking — for young people. That’s why the 31-year-old Daiana began offering young girls an alternative: a ballet school in the favela. – Der Spiegel

Between 2011 and 2018, the 264 independent local NPR stations (plus 150 unaffiliated) added 1,000 full-time and part-time journalists, having started that timeframe with just over 2,000 journalists. At the same time, newspaper newsrooms were shrinking to half their peak size and local digital startups, with a few exceptions, are making do with well-focused but tiny staffs. – Poynter

“The new work, Black Exhibition” — which he developed under the pseudonym @GaryXXXFisher — “is described in the script as an attempt ‘to look at a queer black male psyche through the lens of its literary influences'” — those being, among others, Kathy Acker, Samuel R. Delany and Yukio Mishima. – The New York Times

“The Justice Department is going on the offensive against the anonymous author of A Warning, telling them in a letter obtained by CNN Business that he or she “may be violating ‘one or more nondisclosure agreements’ by writing the anti-Trump book. The author’s publisher is rejecting the argument and saying the book will be released as scheduled. And the author’s agents are accusing the government of trying to unmask the author.” – CNN

One night at Hamilton in San Francisco earlier this year, right at the moment of the Hamilton-Burr duel, an audience member had a heart attack; the commotion made some people believe there was a real shooter in the house, and the audience stampeded. A real shooting during a play could happen, as it has at cinemas and rock concerts; live-shooter training for theater personnel is now a thing. And since art reflects life, we’re seeing more guns onstage as well. Lisa Lacroce Patterson writes about how theaters are dealing with guns, onstage and off. – American Theatre

The November 20 event in Tel Aviv was planned as a benefit for a nonprofit providing medical care to indigent patients. But that organization’s founder, an Orthodox rabbi, asked that no female singers be included, per a stricture observed by ultra-Orthodox Jews. Furious debate broke out around the country, and the Israel Philharmonic was the first among several performers to withdraw. The concert has now been canceled. – The Times of Israel

“Alter the status of women and you have affected all the most intimate and significant nodes of life: the relation of wife to husband, mother to child, sister to sibling, daughter to parents, worker to coworkers, and employee to employer (or vice versa). This change in women’s standing that happened what seems like yesterday, and is still happening today at an accelerated rate, is the most profound revolution that can take place in a society.” – New York Review of Books

Sure, there’s Heinz Hall, where the Pittsburgh Symphony performs, but that’s 2,700 seats, and smaller ensembles can’t really fill the hall. It’s depressing to be in a half-empty hall, even when there are lots of people there. So what to do? – Pittsburgh Post Gazette

Her most famous role was the lead in Andrew Lloyd Webber’s Aspects of Love, which she originated in both London and New York (a first for an American in an ALW show), and she garnered a Tony nomination in for the 1992 Broadway adaptation of Anna Karenina. She made most of her later career in regional theater, and she had a notable sideline performing the folk tune settings in her father’s American Songbook series. – The New York Times

“Witnesses report that three suspects rammed into the cathedral in Oloron-Sainte-Marie in southwestern France with a tree trunk strapped to their car.” (Yes, a battering ram.) “Inside the church, they quickly sawed through steel bars and smashed protective glass to access silver chalices, gold objects, and other treasures from the medieval cathedral. They fled the scene in a second vehicle.” – Artnet

“I was never ashamed of being a sissy, and I wore the bullying as a badge of honor,” he writes. “I knew what was going on and I knew who I was, so I took care of myself by being funny. Nevertheless, every solo I made up in the first part of my career was a humiliation dance in one way or another.” – Washington Post

Published in August, Mr. Dubois’s novel “Tous les hommes n’habitent pas le monde de la même façon” (“All Men Do Not Live in the Same Way”) is a story narrated by a man languishing in a Canadian prison for an unknown crime. – The New York Times

Without the blunt, binaristic borders between zones — humanities versus sciences, humanities versus social sciences — the disciplines could connect across the much more complex and multifarious surfaces and interfaces they have with each other. Scholars could interact with their counterparts in all fields without the burdensome assumption that they represent more — an entire community more — than their specific area of expertise. – Inside Higher Ed

“Arthur Farwell is probably the most neglected composer in our history.” This assessment, by the late composer/critic A. Walter Kramer in 1973, rings ever louder today; Farwell has been deemed untouchable. Hounded by the watchdogs of “cultural appropriation,” he has fallen prey to dictates of political rectitude. – Joseph Horowitz

My father had no knowledge of or interest in classical music himself, but he brought home a record for me whenever he passed through Memphis on business. This is the one I remember best. – Terry Teachout

Autumn is “Oscar season for books” in France, and that’s not a super feeling for the authors. “For all the finger food that will be gobbled up and all the champagne flutes that will be downed in this chaotic two-month period—from mid-August to the end of October—that runs from the release of 524 books to the crowning of a happy few by a dozen major literary prizes mid-November, La Rentrée Littéraire is an exciting and brutal tradition that engages the whole country, and takes both a mental and physical toll on an increasingly anxious book industry.” – Literary Hub 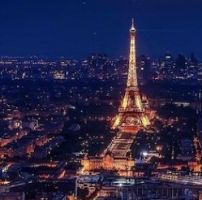