“In essence, the California state legislature has made it mandatory for the nearly 500,000 students in the Cal State system to take the classes that student activists and others fought for universities to implement decades ago. While these classes are not without controversy, as a scholar who studies racial dynamics on college campuses, I argue their benefits outweigh their liabilities.” – The Conversation

From a neuroscience perspective, when a study participant experienced pleasurable musical chills, Chabin et al. observed an uptick of theta activity in the prefrontal cortex in conjunction with higher arousal and emotional-response ratings. – Psychology Today

“You have to listen. It’s not just about following me, you have to know how what you’re doing relates to what other people are doing. Have your ears out. … Another [issue] is time: With a group like Alarm Will Sound, it’s in everyone’s DNA that the default is: We’re going to play in a steady pulse. … That’s not necessarily the ground that people walk on in the orchestral world.” – Van

“The most fundamental enquiry of all is into our selves; anxiety is the key to this sacred inner chamber, revealing which existential problematic – the ultimate concerns of death, meaning, isolation, freedom – we are most eager to resolve.” – Psyche

With the clarion call of the Black Lives Matter movement ringing in the background, Modirzadeh described the SFSU music program as fettered by “a deep intergenerational upholding of that archaic ‘separate but equal’ logic that miseducates, leaving our students perpetually revolving around a musical caste system stuck thick in ethnic myopia.” – San Francisco Classical Voice

“I think the notion of criticism may expand, and people will write more culturally comprehensive mixed-discipline pieces. But it’s hard for me to imagine. It will be interesting to see how much people are actually willing to read in the future online, and whether most communication will be single lines, single impressions, condensations.” – The Stage

He devoted much of his life, and his writing, to rebellion against his parents, Gunnar and Alva Myrdal, each of whom won a Nobel Prize. But the body of his work was reportage and advocacy on Communism and those who lived under it; neither Scandinavian social democracy nor the Soviet system was leftist enough for him. He wrote the first Western eyewitness account of the lives of ordinary villagers under Mao, but his later years found him defending the Tiananmen Square massacre, the Khmer Rouge, and Holocaust denial. – The Washington Post

A prominent figure within the New York art market, Sam Orlofsky had been one of the most visible leaders at Gagosian, where he recently helped launch a program known as its “Artist Spotlight” series, through which works by Damien Hirst, Jenny Saville, and more were sold for large sums of money online. – ARTnet

The breadth of mental processes and behaviours for which stimulation has been argued to have an effect is quite staggering, including creativity, appetite, multitasking, memory, mind wandering, attention, motoric processes, sensory processing and theory of mind, to name but a few. – Psyche

Born in 1970 as a sort of successor to Judson Dance Theater, The Grand Union (named after a supermarket chain) lasted only for six years. Yet the group and (subsequently) its members — among them Yvonne Rainer, Trisha Brown, Douglas Dunn, David Gordon, and Steve Paxton — changed the course of the art form. Not long ago Wendy Perron came across some old Grand Union videotapes and wondered if the work could be as good as she remembered: “It was even better.” – The New York Times

Recently, Stephanie Lepp has been experimenting with a maligned technology, deepfakes, to create Deep Reckonings, a series of synthetic videos that imagine controversial public figures having a reckoning; in the deepfake footage, Alex Jones, Brett Kavanaugh, and Mark Zuckerberg reflect on the damage they have inflicted on society. – Forbes

“Here, the directors of five festivals — Sara Ortiz of the Believer Festival, Lissette Mendez of the Miami Book Fair, Amanda Bullock of the Portland Book Festival, Steph Opitz of The Loft’s Wordplay, and Conor Moran of the Wisconsin Book Festival — discuss how their teams made it work.” – Literary Hub

“Last year, an opaque selection process opened a rift between public officials and local artists when the city suddenly rejected [Maya] Thomas’s winning design. The reversal attempts to heal divisions. On Monday, the San Francisco Arts Commission unanimously voted to approve a previous recommendation made by a 2019 review panel for Ms. Thomas to design the luminary’s sculpture.” – The New York Times

Revealing a movie’s grosses is not something studios are obligated to do, and for decades, they didn’t. So why, in the late 1980s, did Hollywood start? Because it made for buzz within the industry and beyond to (some of) the audience; sometimes, worldwide headlines were made. But now that lockdowns have led to the release of even major blockbuster titles online, “studios get to rethink whether they want to continue sharing grosses on a 24/7 basis with rivals, analysts and the media.” – The Hollywood Reporter

“The announcement on Monday, Nov. 2, by the Symphony management cited a cumulative revenue loss of $40 million by the end of the 2020-21 season as a result of the ongoing COVID-19 pandemic. All of the orchestra’s live performances through the end of the calendar year have been canceled.” – San Francisco Chronicle

“The Australian government has pledged A$10.1 million (about $7.2 million) in additional funds over four years toward the return Indigenous cultural heritage objects held in collections overseas.” – ARTnews

Grayson Perry: “I think every part of life has probably got a bit of fat that needs trimming, a bit of dead wood. It’s awful that the culture sector has been decimated, but I think some things needed to go. … Too often, the audience for culture is just the people making it — theatres with whole audiences of actors, or exhibitions only put on to impress other curators.” Yes, many arts figures have criticized Perry for this, but some have defended him as well. – BBC

The regulations put forth by the Liberal government today in a new bill focus on clarifying that online streaming platforms like Netflix and Spotify will fall under the Broadcasting Act through a new category called “online undertakings.” – CBC

“Drawing on satellite imagery, data analysis and on-the-ground reporting, the think tank [Australian Strategic Policy Institute] estimated that, since 2017, 65% of the [Xinjiang] region’s mosques and 58% of its important Islamic sites — including shrines (mazars) and cemeteries — have been either destroyed or damaged.” – The Art Newspaper

There was huge relief and even some jubilation lat month when, for the first time, Venice’s long-delayed, wildly over-budget contraption for keeping flood tides out of the Venice Lagoon was successfully deployed and the city stayed dry. But new rules say the barrier should be used only when the water level is 103 cm, at which point two-thirds of the old city will be wet. (St. Mark’s gets flooded at 80-85 cm.) Why did the authorities decide this? Read on … – The Art Newspaper

“Analysis of an indoor concert staged by scientists in August suggests that the impact of such events on the spread of the coronavirus is ‘low to very low’ as long as organizers ensure adequate ventilation, strict hygiene protocols and limited capacity, according to the German researchers who conducted the study.” Be aware, though, that the paper has not yet been peer-reviewed. – The New York Times 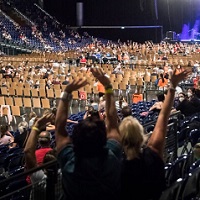