“The daughter of a wealthy industrialist, Ms. Laforêt won a radio talent contest as a teenager and … went on to appear in 37 feature films, including the 1961 dramas Saint-Tropez Blues, where her performance of the title song with rock vocalist Jacques Higelin effectively launched her singing career” — she ultimately sold more than 35 million records as a pop star — and The Girl With the Golden Eyes, a Balzac adaptation with a title that endured for decades as her nickname.” – The Washington Post

“It’s a big piece of evidence countering a major argument used by those arguing against ditching overdue fines for library books.” – Forbes

Vinyl sales have been surging in the last few years, as CD sales stay flat and digital downloads decrease. In the United Kingdom, data from 2016 reveals that vinyl LP sales revenue surpassed that of digital downloads. And in the United States, LP sales are on par with the sales of CDs. – The Conversation

“Particularly in the past few years, conspiracy theories have been omnipresent on the internet and in social media. These modern forms of communication allow conspiracy theories to spread faster than ever, and make it easy for like-minded people to connect and form online echo chambers. As a result, the flat-Earth movement – endorsing the conspiracy theory that the Earth is actually flat and that scientists have been lying to the public for more than 500 years – is now an organised society with regular conferences.” – Aeon

Sir Jonathan Miller’s direction of The Mikado — his staging, dating all the way back to 1986, is now back — is the source of the treasure-hoard that has allowed English National Opera’s survival for most of my opera-going life. – Paul Levy

The alto saxophonist has long found that the nine-piece-ensemble format stimulates his creativity, and over the years, he has made several nonet albums. – Doug Ramsey

“I won’t say women are discriminated against as much as not given the same pathways as men. mostly because there is a male dominance in terms of personnel in the business. It’s been generations of music schools having faculty members who were renowned male soloists or conductors. The system was created that way, so it takes a lot of time to get women in those roles and as mentors to other talented women.” – Dallas Morning News

The fakes made their way to Prince Charles’ charity HQ in a manner befitting any art forgery, from a group of Agatha Christie characters. The work was part of a 10 year loan from 37 year-old ex-billionaire James Stunt, the former husband of Formula One heiress Petra Ecclestone. A stint in a Royal domicile could potentially increase the auction price of any artwork. – Vanity Fair

Washington starred in the play on Broadway. So why take it to Netflix, of all places? Washington: “Not everybody has $200 to go and see a play on Broadway. … The economic diversity of our audience was really important to me, but also the global diversity of our audience, because violence with the police and bias with the police is not just an issue in the United States.” – Variety

Well, after the librarians remodeled the library and encouraged teachers at the Melbourne school to bring their entire classes – not just kids in detention – to the space, the school’s test scores shifted radically, and the school is seeing a massive increase in students wanting to study arts and music. – The Age (Australia)

It’s not because she likes the publicity or the effort to stay balanced with her hands zip-tied behind her back. It’s the planet. “She hopes to inspire others to flood the streets and compel lawmakers to force fossil fuel companies to keep trillions of dollars of remaining oil reserves in the ground.” – The New York Times

Children aren’t reading for their brand, and they’ve got something adults often don’t: Time. Also, “children’s books are where we first encounter myriad aspects of life. Such intense periods of discovery tend to lodge in the memory.” – The Observer (UK)

Tarantina was known on New York stages before he got involved in movies and TV shows including The Gilmore Girls and, more recently, The Marvelous Mrs. Maisel. – The New York Times

Student mental health, teacher favoritism, inequities in class makeup and in casting … it’s all stressful for the young actors of Canada (and there are ways that some of these things could change … if performance instructors wanted them to). – HowlRound

That was October 22, and the train was in southeast London. The soloist from the Royal Phil eventually received a private message on Twitter from someone who said he recognized (from a security photo) the man who took the case, with the violin and a couple of special bows as well, off the train. And then? “Both the violin and the bows were ‘in tune,’ when they were returned to him Friday night at a supermarket parking lot in Beckenham.” – The New York Times

The place that Dubliners call the House of the Dead (really, the House of “The Dead,” of course) has been sold. “Last week city authorities announced a plan to turn the House of the Dead into a 54-room hostel, prompting an outcry that property deals were trashing culture and zombifying Ireland’s capital to make way for foreign tourists, students and tech workers.” – The Observer (UK)

He wasn’t president for long (31 days, actually), but during that time, he sported his (then famous) sword from the (then famous) Battle of Tippecanoe. In 1979, it was stolen from the Connecticut Historical Society. The sword – or maybe a copy, the owner claims! – went up for auction and was promptly seized. But whose sword is it? – The New York Times

In the U.S., at least, kindness and empathy are on a statistical decline. So what can parents do? Stop the focus on success, and focus on what we can do that’s decent and good. “The point is not to badger kids into kindness, or dangle carrots for caring, but to show that these qualities are noticed and valued.” – The Atlantic

Malevich lived and worked in Belorus – and “for 25 years [this painting] has been on display in the city of Hrodna, near the Polish border, with the label: Malevich?” But does Belorus finally have its own, or is it simply from his studio? – BBC 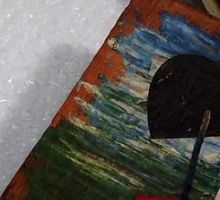