“As the poll exists to salute the extraordinary diversity and richness of films from all around the world, we wanted to ensure that its voters were from all around the world, too. The 209 critics who took part are from 43 different countries and speak a total of 41 languages – a range that sets our poll apart from any other. The result: 100 films from 67 different directors, from 24 countries, and in 19 languages.” (Interesting fact: the number-one film got no votes from any of the critics from its country of origin.)

“Severely damaged during the Second World War and closed to the public for more than 70 years, the Romanesque Hall at the heart of Budapest’s Szépművészeti Múzeum (Museum of Fine Arts) will be a highlight of its reopening tomorrow (31 October), following a three-year restoration. The total cost of the renovation was around €40m.” 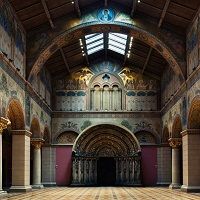