“Bloomberg Philanthropies today announced the launch of the Asphalt Art Initiative which will assist cities looking to use art and design to improve street safety, revitalize public spaces, and engage their communities. The Initiative includes the publication of the Asphalt Art Guide, with case studies and best practices from cities around the world, as well as the awarding of grants up to $25,000 to 10 small and mid-sized U.S. cities to implement their own transformative projects.” – Bloomberg Philanthropies

Before it lost public sympathy with a badly misjudged action on the London Underground, the British activist group’s agitprop had had a good deal of success, thanks to its “instinctive understanding of public theatre.” Critic Kate Maltby looks at Extinction Rebellion’s successes and missteps alongside the current Old Vic production of Duncan Macmillan’s Lungs, starring Claire Foy and Matt Smith as a couple of climate-anxious white millennials. – The New York Review of Books

The Asphalt Art Initiative will award 10 small or mid-sized cities with grants of up to $25,000 to create colorful murals on streets, intersections, and crosswalks, or vertical surfaces of transportation infrastructure like utility boxes, traffic barriers, and highway underpasses. “Most of the time these projects are used as a relatively inexpensive and quick way to either make streets safer or to reallocate space away from cars and for people.” – Curbed

“In the early years of the twentieth century, women worked in virtually every aspect of silent-film-making, as directors, writers, producers, editors, and even camera operators. The industry — new, ad hoc, making up its own rules as it went along — had not yet locked in a strict division of labor by gender. … Now we are in the midst of a new round of rediscoveries — this time of women’s behind-the-camera roles well into the golden age of Hollywood.” – The New Yorker

Sandra Jackson-Dumont: “I’m trying to move the idea away from people being visitors to the museum to being users. You to go to a library to use it, right? You’re not a visitor to the library. I’ve been talking about how can we make this place the extension of what people do in their daily lives.” – ShondaLand

Last week, the company announced that Sue Dixon, who has been acting general director since Christopher Mattaliano’s departure, will officially take on the job. – Willamette Week

“Anupama Chandrasekhar isn’t one to shy away from a tough subject. The Indian playwright has written about acid attacks, sex tapes and her home country’s culture of patriarchal violence. ‘I have been asked so many times, mostly by men, ‘Why don’t you write comedies, or plays that celebrate India?” she says. ‘I tell them: on the day that these things don’t happen any more, I will happily start writing bedroom farces.'” – The Guardian

In a sort of sequel to last week’s New Republic article on how Mr. Condé Montrose Nast created the high-end glossy magazine industry, writer Reeves Wiedeman visits the (shrinking) Condé Nast offices at One World Trade Center for a longread about how the (shrinking) magazine-publishing group has and hasn’t been adapting to the rise of digital media, especially with Anna Wintour having been made creative director for the entire company. – New York Magazine

“The part of our brain that regulates our time perception has been overloaded and exhausted, causing our sense of past, present and future to melt together.” – The Guardian

The track on this Duke Ellington LP that hit me hardest was “Sepia Panorama,” which featured Jimmy Blanton. I had only just started teaching myself how to play string badd, and Blanton was the first person ever to become a major jazz soloist on that notoriously unwieldy instrument. – Terry Teachout

In a couple of weeks, you’ll have so many options to pay for content à la carte, you won’t really know where to start. And yes, you’ll be paying extra for the inconvenience. – Shelly Palmer

Whip through that “Seinfeld” at double speed? Audio books already come with this feature, allowing readers to speed up the playback. But video producers object to the idea as it changes how viewers will see their work. – The Hollywood Reporter

“Around 1975, the art curator Alanna Heiss came across a hulking dilapidated schoolhouse in Long Island City during one of her scoping expeditions for exhibit spaces. … Heiss, who came to New York City in the late 1960s, had a reputation for transforming old and funky spaces into dramatic staging grounds for contemporary and experimental art.” And with this one, she outdid herself. – Gothamist

“As Paramount’s head of worldwide production from 1966 to 1975, he was credited with helping lift the company’s sagging fortunes with a staggering variety of popular and often critical hits. … He was long considered one of the savviest production chiefs in Hollywood, but cocaine abuse gradually derailed his career.” – The Washington Post

Said a statement from the actors’ union, “The fact that [a performer] is trans may be completely invisible in the role or production, but it powerfully represents diversity in the industry. This ‘invisible’ diversity is just as important as more physically recognisable forms of diversity.” – The Guardian

Two years ago, ICOs lured billions of dollars into blockchain companies and spawned a cottage industry of pilot projects. For a while, a blockchain seemed a salve for just about any problem. Many were scams from the start. But even among the more legitimate enterprises, there are relatively few winners. – Wired

In June, Patrick Drahi, a French-Israeli telecommunications billionaire, took Sotheby’s private in a deal worth $3.7 billion. The purchase, by Mr. Drahi’s BidFair USA, returned the only publicly traded major auction house to private ownership after 31 years on the New York Stock Exchange. – The New York Times

People come for all sorts of reasons: “One woman clearly thought it was going to be like the movie Austenland and she’d meet her husband here.” – The Guardian

Unlike the previous one, which was across the 405 freeway from the Getty, this one is “100% on our side of the 405, immediately north and west of us, and on our property,” according to Lisa Lapin, the Getty Trust’s vice president for communications. – Lee Rosenbaum

This just in from Lisa Lapin, the Getty Trust’s vice president for communications: “Situation improved, but still active. Fire Department estimates 48-72 hours to control and extinguish. We are going to stay closed tomorrow at both Getty Center and Getty Villa. While we are safe, we want to allow emergency responders space to operate.” – Lee Rosenbaum

The Getty fire, which broke out near the Getty Center along the 405 Freeway, has burned more than 500 acres. – Los Angeles Times 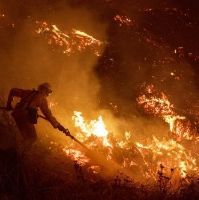