The idea of history as “something that equally comprises past and future as states of a continuous subject, so that we may speak of history as such” (as the philosopher Eckart Förster puts it), emerged only in the second half of the 18th century. – Chronicle of Higher Education

For the Joyce Theater’s online season, choreographer Molissa Fenley has revived State of Darkness, her 1988 adaptation of the Stravinsky ballet for a single performer, with seven different dancers — as different as Sara Mearns, Annique Roberts, and Michael Trusnovec — giving their own interpretations. Gia Kourlas reports on how the project has come together. – The New York Times

“As the 9pm to 6am curfew now covers roughly half of France, … culture minister Roselyne Bachelot unveiled a new €115 million support package, split between the cinema (€30 million) and the live performance sector (€85 million).” – The Local (France)

In a country where publishing is so concentrated in the hands of just a few conglomerates who have acquired some of Britain’s most successful small presses, the chances of British novelists who are neither English, nor published by major London publishers, winning seems to be getting smaller. And for non-English UK novelists published by small presses (self-published works are ineligible for the Booker), the Booker is simply not a plausible option. – The Conversation

“My worry is that so many musicians will be forced to leave the profession that we will not be able to return to anything like the cultural life that we enjoyed previously. And that this exodus is happening right now, and that it will not be noticed until it is too late,” said Rattle. – The Guardian

But, plot twist: Did those gifts ever exist in the first place? The “chairwoman of the board of trustees, said in an email that the museum has no record of a $50 million pledge or any pledges totaling that amount.” – Washington Post

Laymon: “That word memoir, in some way it distracted me from the hard shit that I was writing. … Having the memoir title helped me sort of get through the heart work, in this fucked up way.”  – LitHub

Perlman was extraordinary, truly. The painter once said, “‘In my work I need to identify myself with the essence of things.’ Such fierce focus as a visionary expressionist painter nourished her in a life of unforeseen and radical changes of circumstance. She was essentially self-taught, and it was following her arrival in the Dutch West Indies as a young Jewish refugee from Europe in 1940 that her art emerged with a consummate self-assurance.” – The Guardian (UK)

NIna Wolarsky, who was VP of original series – drama, is out. “The Wolarsky news comes just a week after president of originals Jane Wiseman was shown the door. The ongoing senior management exodus from Netflix also includes Channing Dungey, to whom Wolarsky previously reported. Dungey stepped down from her vice president of original content role to succeed Peter Roth as chairman of Warner Bros. Television Group.” – Variety

After producing everything from The Talented Mr. Ripley to The Immortal Life of Henrietta Lacks, Lydia Pilcher started looking for a project of her own. “Being on the inside of the industry as a producer and really being able to see all aspects of how decisions get made — Who decides what stories get told? How did the directors get chosen? — it made me understand that there was something being missed on the Hollywood end. It’s not just that the stories were being shut out. A lot of money was being left on the table.” – Variety

In Seattle, and likely everywhere, it’s time to think a little bigger. “A different kind of literary institution means reinterpreting what a core mission, vision and values mean when cast upon a wider field. Many arts institutions today are ‘committed to racial equity’ but don’t have the courage to take a position on upzoning, land use policy or ending the sweeps of homeless encampments. In this era, the arts are an active practice. Housing, human services, the role of government—these are the defining fights of our time and will shape the future of our city.” – LitHub

Don’t forget to look at your shelves for ideas. – The New York Times

What does a new book filled with photos of men loving other men illustrate? “Seeing ourselves in the past is as much about being certain of our present and, dare I say, our future.” – Hyperallergic

The British borrowed 3.5 million more ebooks (and a total of 5 million more e-books, audiobooks, and e-comics) between March and August than in the same time in 2019 – and a lot of them were crime thrillers, a report shows. – The Guardian (UK)

To be fair, the Hammer Museum show hasn’t officially opened. Still: “At Bloom & Plume Coffee in Historic Filipinotown: Customers linger on the sidewalk awaiting shots of espresso and oat milk lattes to go, as the K-pop girl group Blackpink spills from the café’s speakers. Unbeknownst to many of the customers moving through morning routines, they are attending one of the city’s most anticipated art events of 2020.” – Los Angeles Times

The question: How can public art affect, and reflect, communities and the time we live in? The answer, by artist Abigail DeVille, is a reinvention. “The piece summons ‘a long line of freedom fighters who have been protesting to exist in this nation from the very beginning.'” – The New York Times

It can be creepy to feel extra alone when pods are enjoying concerts, drive-in movies, and more. But: “As we slowly adapt to living with the pandemic, many of us are realizing that the connection we miss to art and entertainment is as powerful as it is to our social relationships. It’s art, after all, be it a concert, a theater, a museum or even a theme park, that helps us make sense of or simply survive the moment we’re living in.” – Los Angeles Times

The dance company says it will make a return in the fall of 2021. “We’re deeply sad and we’re disappointed that we have to keep ourselves off the stage for this much longer.” The plan is to help the dancers, who are trying to stay fit at home, ramp up to City Ballet skill and performance levels. – The New York Times

Burns, who won the Booker Prize for Milkman in 2018, has won the International Dublin Literary Award. She’s the first Northern Irish writer to win the prize (and was the first to win the Booker as well). She thanked the Belfast Library and said, “There seemed to be a black market in library tickets when I was growing up. … I managed to go into the building with about three to five cards and come out with about nine to 15 books.” – BBC

Visiting isolated villages where many people have never seen a play before, the Nepali troupe called Shilpee does forum theatre, where a script is performed twice; the second time, audience members can stop the action and suggest or act out a different solution to the situation onstage. Says director Ghimire Yubaraj, “It would be easy to be judgmental and disregard the audience members as poor or uneducated, but their ideas can be brilliant.” – The Guardian

Gabriela Lena Frank hosts the young composers in her apprentice program at her mountainside farmstead in northern California, where, she says, “we get rid of the shame of wrong notes. We make good food and I say, ‘You get to make mistakes here.'” As one alumna put it, “It shows you that music making is an earthly thing, so why not connect to the earth while we make it?” – The New York Times 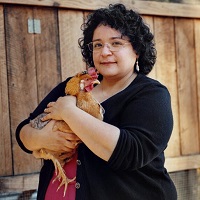