At the helm of the UK publishing house Jonathan Cape, “he discovered or helped advance the careers of such acclaimed authors as [Kurt] Vonnegut, [Gabriel] García Márquez, John Fowles, Thomas Pynchon, Ian McEwan, Edna O’Brien, Clive James, Martin Amis, Julian Barnes, Salman Rushdie and Bruce Chatwin.” In fact, 15 of his authors (so far) have won the Nobel Prize for Literature. – The Washington Post

“Until its COVID-forced closure in March, the Kimmel was earning 93% of its income,” mainly from touring Broadway shows and rent from its resident groups, “leaving just the small remainder to be made up in donations — an unusually lopsided ratio among nonprofits. Now, though, with ticket sales gone, the Kimmel cannot lean on a list of loyal donors to the extent that some other groups can.” – The Philadelphia Inquirer

It is his instability—which enlists the audience in active and ongoing negotiation and interpretation, changing as we grapple with him at different historical moments—that makes him relevant. The music may be astonishing, the ideas volatile. Which will have the longer and more consequential afterlife? Perhaps more compelling than either, Ross suggests, is the irreconcilability of the problem. – Slate

SAG-AFTRA, which has long claimed jurisdiction over the taping of live shows, offered Equity a limited waiver during the pandemic, but Equity rejected it, accusing SAG-AFTRA of “looking to use a pandemic to claim jurisdiction in Equity workplaces now and into the future in a way they haven’t had before,” and disrupting the relationship between employers and actors “that has existed for years, if not decades.” – Deadline

It’s not easy out here for a novelist. “Good political satire should be imbued with the spirit of speaking truth to power. But what does that concept mean when the powerful are impervious to truth telling?” – Washington Post

Remote work changes how, and where, people live. But are towns near national parks or in resort areas remotely, so to speak, ready for an influx of workers from cities? Not even close. “Housing affordability and cost of living issues are a concern in gateway communities across the West.” – FastCompany

Montalvo, whom Lin-Manuel Miranda spoke about at length in a Twitter thread on Sunday morning, also performed in the forthcoming movies of In the Heights and West Side Story. – Variety

It’s remarkably reminiscent of the NEA Four, for those who lived through that terrible time: A queer artist wants to use their body for their work; gets approval and funding; word is leaked to conservative outlets; said outlets absolutely flip out and condemn the council; council removes funding. All too gross and familiar. “The decision to kill the contract raises worrying questions about the potential government overreach and the possibility of censorship in Australian cultural policy at a time when the financial crisis in the sector is already threatening to shut out marginalised voices for good.” – The Guardian (UK)

To be in live opera right now, soprano Lisette Oropesa gets constant COVID nasal swabs, writes down everyone she’s spent more than 15 minutes with, and wears a mask in the building except when she’s on stage. “Now we are in close quarters, you just have to trust that you’re negative and everyone else around you is negative, and at the time it’s okay to touch and sing close to each other. But it’s still a tiny bit never-wracking.” – The Irish Times

Movies and TV shows are, of course, great ways to get wide swaths of people interested in history. But “as popular culture tries more and more to address the international tragedy that is the slave trade, it is still far from accurately portraying that history onscreen — especially when it comes to Canada.” – CBC

The artist admitted it on social media. In Nottingham, not everyone gets it … or cares. “Within hours the council had rushed to protect the piece by placing clear plastic sheeting over it. Vandals have spray-painted over the plastic two or three times already.” – The Guardian (UK) 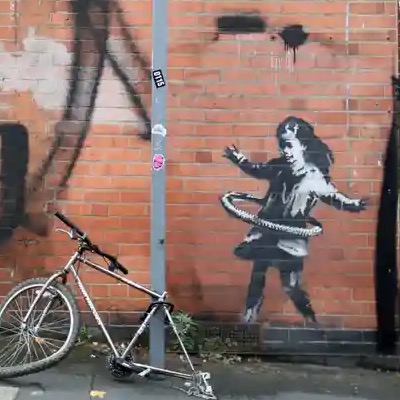