https://bostonreview.net/class-inequality-politics/justin-h-vassallo-world-henry-ford-madeHenry Ford would likely find his relevance to the current crisis of globalization a testament to his “producerist” philosophy. But as historian Stefan J. Link writes in his new book, Forging Global Fordism: Nazi Germany, Soviet Russia, and the Contest over the Industrial Order, Ford’s peculiar ideals “projected a political (and moral) economy that hardly anticipated the American consumer modernity that emerged after 1945.” – Boston Review

“Music teachers in Canada are being forced to improvise. Choir classes, for example, either must meet outdoors to rehearse or they simply hum and chant their way through class. Host Marco Werman speaks with Toronto-based Anita Elash about how music teachers are managing to keep music programs alive during the pandemic.” (audio) – PRX’s The World

“The policy, billed as the Basic Income Pilot for Artists, outlines details including directing almost $6 million in funding to arts organizations, artists, art teachers, and cultural workers, in addition to a Universal Basic Income program. Under the basic income, 130 artists will be selected to receive the [$1,000] monthly stipend for at least six months, beginning in early 2021.” – Artnet

“[He] had over 150 films to his name, with diverse roles ranging from romantic to serious, and from emotionally disturbed to upbeat and patriotic. His films included several based on stories by renowned Egyptian novelists, such as Nobel Prize laureate Naguib Mahfouz and Ihsan Abdel Quddous.” – AP

“Serious,” of course, is a cheater word that adds latitude to any discussion. At what point does a risk cease to be manageable and become serious? Many Canadians, pummeled by tendentious headlines and frightened by news anchors who have mastered the art of sounding ominous, have come to believe that there is no such thing as a COVID risk that fails to meet this threshold. The statistics bear looking at. – Scena Musicale

Ticketmaster’s exposure to refund claims is uncertain. The company tells its customers that it pays refunds for all canceled shows in about 30 days. But the coronavirus shutdown has dealt a severe economic blow to Ticketmaster and its corporate parent, Live Nation Entertainment; the company reported that its revenue for the second quarter this year dropped 98 percent from the same period in 2019. – The New York Times

“The 36-year-old woman, who gave only her first name of Nicole, sent a hand-written confession and apology along with the stolen objects — which include parts of an amphora vase, mosaic tiles, and shards of ceramics — to a travel agent in southern Italy, who then passed them along to officials. … She goes on to explain that she associates her youthful indiscretion with a long run of bad luck, including two bouts of breast cancer, a double mastectomy, and ongoing financial issues.” – Artnet

Historian Richard M. Eaton argues that there are two languages whose epic literature, poetry, and corpus of law, ethics, and philosophy molded the civilization of the subcontinent and its peoples. The first, obviously, was Sanskrit. The second was, when it arrived, every bit as foreign as English and came to be used as widely and in similar ways. In fact, by the 19th century India had produced a major body of literature in this language, as well as far more dictionaries than its native country had. – Literary Hub

If you’ve used apps like Eventbrite and Meetup, what’s on offer here will be familiar. As an attendee, you’ll find a space where you can discover new workshops, classes and other events to attend. You’ll be able to take part in them directly through Zoom and pay for them using a credit card or PayPal account. You also have the option to gift OnZoom tickets to your friends and family members. – Engadget

“Beru, a Kurdish adaptation of Dario Fo’s 1981 satire Trumpets and Raspberries, was due to open at the city’s municipal theatre, marking the first time a Kurdish-language play had been staged in the institution’s 106-year history.” Turkey’s interior ministry tweeted that “a theatre play spreading the PKK terror organisation’s propaganda will [not] be allowed [in any language]”; one of the actors responded “The play by Dario Fo was performed in many languages all over the world. Why is it dangerous when it is in Kurdish?” – Middle East Eye

A reader writes to James Hamblin, a physician and the magazine’s medical writer, asking if it’s safe for her daughter’s quintet to practice in the backyard. Reviewing the evidence gathered so far, Hamblin responds, “Although there are no clearly documented cases of coronavirus transmission via woodwind, there is a lot of evidence of the benefit of kids studying musical instruments.” – The Atlantic

“The inquiry by Crowell & Moring, hired by the DIA board, came after a June complaint by the nonprofit legal organization Whistleblower Aid was sent to the Internal Revenue Service and the Michigan attorney general. The complaint alleged conflict-of-interest violations tied to the loan of an El Greco painting to the museum by [director Salvador] Salort-Pons‘s father-in-law, Dallas businessman Alan M. May.” – The Detroit News

“Nearly 10,000 theaters closed in mid-March following coronavirus restrictions. Now, they will become one of the last few public places to reopen outside high-risk areas. But they still pose some of the biggest infection risks: the virus can spread easily in closed spaces. To minimize the danger, seats are separated. Show timings will be staggered and digital payment encouraged. Masks and temperature checks are mandatory.” – The Hollywood Reporter

The last two U.S. representatives to the Biennale — Martin Puryear, also a sculptor, in 2019, and Mark Bradford, a painter, in 2017 — are Black artists, as well. The next edition was originally scheduled for May 2021, but the pandemic forced it to be postponed a year. – The New York Times

“After a yearlong research study in conversation with disabled people, the initiative” — called Disability Futures — “has named 20 artists, filmmakers and journalists in its first class of fellows, each of whom will receive a grant of $50,000 administered by the arts funding group United States Artists. The 18-month initiative not only pledges financial support, but aims to foster a creative community across mediums and generations.” – The New York Times

A career newspaperman, he started as a film journalist in his native South Africa and went on to be a theatre and TV critic for two London tabloids; he moonlighted as a song lyricist, writing the words for “Goodness Gracious Me,” “Yesterday When I Was Young,” and Charles Aznavour’s “She.” Then came the offer to write the English adaptation of an old flop, a French musical version of Victor Hugo’s Les Misérables — and, as he later said, “I was able to give up my day job at 61.” – Variety

“For many, British drama schools are beacons of excellence, whose training has led to fulfilling careers, but for others they have become symbols of all that is wrong with British theatre. The heads of some of the UK’s most prestigious schools speak to Lyn Gardner about finding the balance between tradition and change.” – The Stage 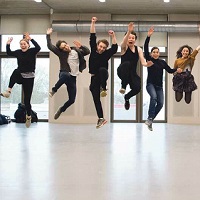