Despite all efforts to try to talk them out of the notion, working-class parents were adamant that an academic education was the best kind of education and that it should be made available to all. – Los Angeles Review of Books

“What doomed Lawrence, in the long run, was not an accusation of phallocentrism but his elevation to the canon. … It is because Lawrence’s own purpose was so big that his novels make such nerve-racking reads. His writing is most at ease when … it happens glancingly. Only when he is caught off guard does he catch the essence of divine otherness.” – The New Yorker

He does Instagram Live interviews, for instance, and a lot of virtual work: “We write something that we like, then I work by phone with Tim Lauer, who is the keyboard player in the nucleus of the band that Daniel will use. I’ll write out a framework for where this could go. Then Tim puts down a keyboard part and I get a temporary vocal from Daniel. Now you have a piano and a vocal and you start adding things.” – Washington Post

It’s all about language choices, the ballerina says. For years she was told she had a great body for ballet, and then she joined American Ballet Theatre. Then she was being told to get rid of her muscles, her breasts, and her butt, told that suddenly she didn’t have a ballet body. “That’s language that’s used, because you’re in a visual art form, it’s about your aesthetic … so that’s what they say to Black and brown dancers to disguise saying ‘You don’t have the right skin color for ballet.'” – PopSugar

Terrifying for book lovers, that is. Take Vroman’s in Los Angeles, for instance. “The past several years had been among the bookstore’s most profitable, ‘and all of a sudden, you fall off a cliff.'” – Los Angeles Times

Portland’s Barry Johnson has some musings about the Elk, statues of Robert E. Lee, and all of art history. “Art is emancipatory. … It can lead me almost anywhere, even to thoughts about the intent of the artist, the times the artist lived in, the artist’s relationship to those times, the times and art and artists that followed and preceded the art+artist+times I’m focusing on.” – Oregon ArtsWatch

“Every movement has its own look and feel. And we need to give our systemic change its own distinct aesthetic—to match style with sustainability. This is why we will set up a new European Bauhaus—a co-creation space where architects, artists, students, engineers, designers work together to make that happen.” – Fast Company

Both the pandemic and the protests have revealed how deep inequalities run within the music industry, among audiences and performers. There is no going back to normal. – Van

“We’re accustomed, after all, to think of the opera house as a place where larger-than-life conflicts play out, amid crashing orchestral textures and powerful vocal exertions. And the standard operatic repertoire offers a broad array of deep-dyed villains, among whom Trump might seem to be well at home.” – San Francisco Chronicle

Ecologists have long known that predators play a key role in ecosystems, shaping whole communities with the knock-on effects of who eats whom. But a new approach is revealing that it’s not just getting eaten, but also the fear of getting eaten, that shapes everything from individual brains and behaviour to whole ecosystems. – Aeon

“There’s no getting away from the fact that overall it’s a difficult time,” said Jason Wood, creative director for film and culture at HOME in Manchester. “We feel huge sympathy for people losing their jobs. But it’s an exciting time for independent cinema. It’s really important to recognise there is an industry beyond the mainstream blockbuster film culture.” – The Guardian

The case nominally focuses on the FCC’s attempt to lift a ban on any company owning both a newspaper and TV station in a single market, but it will impact broadcast regulation broadly. After all, the Supreme Court’s choice to take up the case comes as the FCC prepares to make its own decision on the worth of other rules that have lasted decades, including a prohibition on any merger between or among the Big Four broadcast networks, ABC, CBS, Fox and NBC. – The Hollywood Reporter

“A musicologist and record producer best known for influential, lucidly written biographies of Beethoven and Mozart as well as a hotly debated scholarly article on Schubert’s sexuality,” he was, as Donal Henahan once put it in a review, “one of the most persuasive voices on behalf of the perilous intellectual voyage known as psychobiography — or, less kindly, ‘psychobabblography’.” – The New York Times

Chris Jones: “The pandemic that has closed its theaters — with no clear path to reopening — is a primary cause of trouble. But Second City is also suffering from the great American schism, the internal fury and polarization that has festered over the last four years, with direct encouragement from the top. Satire is on the ropes. A new owner can fix the internal problems, but the American people will have to decide if they ever can laugh together again.” – Yahoo! (Chicago Tribune)

“The governor’s controversial lifting of pandemic protections [on Sept. 25], even as coronavirus infections rose, was just one of multiple conflicting and confusing directives from the state, counties and cities of Florida. … For official live-entertainment venues, the state’s Phase 3 plan … says concerts halls and auditoriums [may] ‘re-open fully with limited social distancing protocols.’ … But the situation for smaller venues, many of which are technically bars, is often different.” – Variety

“The directors of the Rijksmuseum and Tropenmuseum in Amsterdam said they would support the proposal made on Tuesday for a legal structure for the return of an estimated 100,000 pieces where a claim for restitution could be made, with the emphasis on return where ‘involuntary loss’ is identified.” – The Guardian

An independent investigation into how the Guggenheim Museum handled last year’s exhibition on the artist Jean-Michel Basquiat has concluded there is no evidence that the show’s guest curator, Chaédria LaBouvier, who is Black, “was subject to adverse treatment on the basis of her race,” the museum announced on Thursday. The museum simultaneously announced that Nancy Spector, the artistic director and chief curator, who is white, was leaving “to pursue other curatorial endeavors and to finish her doctoral dissertation.” She has spent 34 years at the Guggenheim and has been publicly criticized by Ms. LaBouvier. – The New York Times

“The $25 million gift, which exceeds the entire annual programming budget of the Music Center, also will be used to create a network of community partners who codesign programs. Many of these partners will be in the arts, but the Music Center will look to other groups as well, said Moore, who cited a deep connection between access to the arts and mental health and wellness.” – Los Angeles Times

This suggests that we like things because we chose them, which is very different than what we think we’re doing, choosing things because we like them. The babies’ behavior implies that this penchant for dismissing all the non-chosen options is a fundamental and hardwired part of human behavior. – Fast Company

On the surface, this system seems like a useful service, but ultimately it’s become a way to try and make color a private business. It does provide a standard for various industries around the world, but Pantone considers the colors and color formulas to be its intellectual property. This means that they can’t be openly shared, so in order to speak this language of color, you have to shell out for a guide, which will cost you around $650. – Slate

Conceptual artists in the 1960s argued that an artwork’s identity is not to be found in its physical manifestation but in the artist’s idea. That idea can, but does not have to, take material form. Following that logic, the material object is a manifestation of an idea, and it is the idea that is bought and sold on the art market. – The Conversation

In reality, when the future comes, there isn’t more time–and this is just one of many reasons why you should commit to a hobby now. – Fast Company

“In prose that might have leapt from best-selling novels, [he] portrayed the last minutes of thousands who perished in the collapse of the World Trade Center’s twin towers on Sept. 11, 2001; detailed the terrors of innocent Black youths pulled over and shot by racial-profiling state troopers on the New Jersey Turnpike; and told of the coronavirus besieging a New York City hospital. … Colleagues called him a fast, accurate and prolific writer who crusaded against injustice, worked for six metropolitan dailies and wrote or co-wrote six books.” – The New York Times

“The damning, detailed 54-page report by the law firm Cozen O’Connor … shows that … time and again, the elite music conservatory on Rittenhouse Square failed to respond to St. John in a meaningful way to her accounts of rape and repeated abuse by violin professor Jascha Brodsky.” – The Philadelphia Inquirer

“The writer, 77, born in New York, is one of the most celebrated poets in America. She has previously won a Pulitzer Prize, a National Book Award, a National Book Critics Circle Award and a Bollingen Prize. She was the poet laureate of the United States from 2003 to 2004. Before today, only 15 women have ever won the Nobel Prize in literature since it was first awarded in 1901.” – The Washington Post

“We should look anew at 1920 not because centenaries have magical properties but because Fitzgerald’s remarkably sensitive inner ear helped him register, before almost anyone else, when America started losing its balance.” – The New York Review of Books 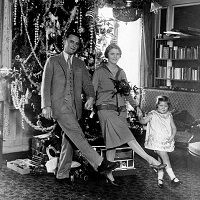