Considered to be a national treasure, “The Virgin and Child with the Infant St. John” (c. 1504–1505) is the only marble sculpture by Michelangelo in the country. – Hyperallergic

The LA Together Festival is proof that something positive has emerged from an unprecedented crisis: With mutual survival on the line, L.A.’s network of small theaters has strengthened its communal bonds, pooling resources, expertise and ingenuity and setting aside (at least for the time being) competition. – Los Angeles Times

“Regardless of who it is that you’re watching dance, whether they’re doing a classical ballet or a hip hop piece or a post-modern piece, who you are watching on stage is already a political statement, and it’s an artistic statement and those things are not mutually exclusive because we’re working with human bodies.” – KPBS

The reason that Aristotle bothered to outline these three kinds of knowledge is that they require different styles of thinking—the people toiling in each of these realms tend toward habits of mind that serve them well, and distinguish them from the others. Aristotle’s point was that, if you have a phronetic problem to solve, don’t send an epistemic thinker. – Harvard Business Review

Stoppard can’t write women? He gives us Night and Day. Emotion? The Real Thing. Competitiveness is evidently one of the many sources of his creativity, albeit competitiveness of a patient, five-day-test-match kind. He worries quite a lot about the amount of time he spends writing and revising a play. ‘If the next gap is as long as the last one,’ he said in 2017, ‘I will be 103 and no doubt ready with blue pencil and blue-black ink as usual.’ – Literary Review

Looking back at the last four decades, it’s clear that the divide between winners and losers has been deepened, poisoning our politics and driving us apart. This has partly to do with deepening inequality of income and wealth. But it’s about more than that. It has to do with the fact that those who landed on top came to believe that their success was their own doing, the measure of their merit — and by implication that those left behind had no one to blame but themselves. – Chronicle of Higher Education

“She was a wise and idealistic young girl, a cartoon kid with a ball of black frizz for hair, a passionate hatred of soup and a name, Mafalda, inspired by a failed home appliance brand. Although her creator, a cartoonist [named Joaquín Salvador Lavado Tejón and] known as Quino, drew her regularly for just nine years, the Argentine comic strip Mafalda became a cultural touchstone across Latin America and Europe, examining issues such as nationalism, war and environmental destruction just as Argentina’s democracy was giving way to dictatorship.” – The Washington Post

The group’s demands, issued on its Instagram page with the hashtag #NoMuseumOctober, stipulate that until every institution publicly announces that frontline workers will be provided hazard pay and benefits for their labour until a Covid-19 vaccine is available, the museum-going public should “refrain from providing these ‘democratic’ institutions the admission dollars they so desperately crave”. – The Art Newspaper

“[Considering] this great variety of materials and uses that define books over some 5,000 years and in every part of the globe, … how adventurous can we be in attributing to material objects — from clay to digital tablets — the characteristics which make them books? … And as forms of print and print in conjunction with script and illustration increased in complexity, how catholic does our definition of ‘book’ become? Do we include maps and sheets of music, fold-out panoramas, and gathered-together illustrations and prints?” – Literary Hub

The layoffs are the first permanent staff cuts made by the world’s largest museum organization since it was forced to close its sites March 14 to prevent the spread of the coronavirus. The Smithsonian lost $49 million — from store and restaurant revenue as well as canceled ticketed events, classes and tours — between March and September, spokeswoman Linda St. Thomas said. – Washington Post

“Simple public [statues are] one thing. Real art is complicated. An artwork, such as a film or play, an opera or a pop song, can contain many ideas, some that we may endorse wholeheartedly, others that we might argue about, and still others that we might all find repellent, offensive or even painful. Thus, [ten Chronicle writers] look at some of the ‘Confederate monuments’ in various arts disciplines and ask: What should be our response?” – San Francisco Chronicle

“The Joffrey said that the decision, sparked by the COVID-19 crisis, will cost the non-profit institution in excess of $9 million at the box office. … [The company] also announced a new virtual programming initiative, the Joffrey Studio Series, … [and] said it was beginning a new ’25 for 25,’ a year-long series of ‘free performances, programs, and partnerships with peer organizations’ from around the city, celebrating 25 years since the company arrived in Chicago.” – Yahoo! (Chicago Tribune)

The enormous contemporary art show that had been planned for next spring was put off for the sake of the artists themselves (the pandemic has interfered with their access to materials and studio space) as well as to make room in 2021 for the major shows — of work by Julie Mehretu, Salman Toor, Dawood Bey, and the Kamoinge Workshop — that had been scheduled for this year and for the big Jasper Johns retrospective. – The New York Times

After seven months of pandemic shutdown, “India’s Ministry of Home Affairs has decreed that cinemas and multiplexes can reopen [on Oct. 15] at 50 percent of their seating capacity, a full month before the all-important Diwali holiday, which in normal times is a box office bonanza.” – The Hollywood Reporter

In which Sejal Shah reconnects with Rathna Kumar, with whom she took master classes in South Indian dance three decades ago, and joins “Vintage Kuchipudi Divas,” Kumar’s WhatsApp group for middle-aged former students who take video dance classes together every week. – The Guardian

“The initiative, known as The Black Seed, is described as the first national strategic plan to provide financial support for Black theaters across the country. It is backed by a $5 million lead gift from the Andrew W. Mellon Foundation; … according to a news release, [it] is the largest-ever one-time investment in Black theater.” – The New York Times 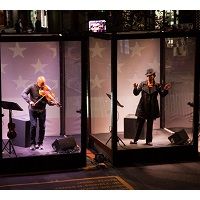