“Theater Latté Da [in Minneapolis] has announced the establishment of the NEXT Generation Commission, designed to support the creation and development of musicals by women and artists of color. The company will award a $20,000 commission to an individual artist or writing team, and provide creative support over an 18-month period.” – American Theatre

“In 2017, 41 percent of female-identifying and 18 percent of male-identifying students reported experiencing sexual assault at Tulane University in New Orleans. Since those stats were released, there have been town halls, support groups, class discussions, consent campaigns, and institutional initiatives. There was also a play, which a group of students [working with the company Goat in the Road Productions] devised in response to the staggering statistics. Roleplay was performed on campus, free of charge, Sept. 5-15.” – American Theatre

“Threewalls, a cultural nonprofit that supports visual artists in Chicago, has announced that it will award $900,000 to artists who identify as African, Latinx, Asian, Arab, or Native American (ALAANA). The organization will grant $300,000 per year for the next three years to artists of color as well as nonprofits that ‘demonstrate alternative ways towards racial equity through the lens of radical imagination and social justice.'” – Artforum

The clarinetist who played at Barack Obama’s inauguration talks about playing with passion, staying humble, setting goals, giving your all on every occasion, and overcoming negativity. (video) – Forbes

“The Foundry was never reduced to a market brand for corporate picking or seduced into the new star on the block for avant-garde propping up. Instead, it put a premium on the blue notes shot through history—the notes of dignity, dissonance, defiance — that constitute the majestic sound of social movements, political struggles, spiritual healings, and psychic breakthroughs.” – Literary Hub

Rebecca Sugar earned six Emmy nominations before she was 30 for her work on the animated series Adventure Time. Now, on her own Cartoon Network series, Steven Universe, she has an entire squad of non-binary female characters, one gender-neutral hero, and a lesbian wedding, the first on children’s TV. – The Guardian

Lone wolves, domestic terrorists, white supremacists, and militiamen on the far-right fringes who have long trafficked in an expansive body of published manifestos and propagandist fiction. Theirs is a kind of sick pop culture, constantly updated and running parallel to the mainstream, that fully accounts for apocalyptic race wars and nationalist-driven coups d’etat. Those steeped in this body of literature are primed to expect the moment where their rhetorical “shit” hits the real-life “fan.” – The New Republic

Major publishers will do right by their cookbook authors, who are usually already established, but there’s a larger set of small publishers who work with newer writers. “With these smaller publishing companies, there isn’t always an advance, and if there is, it’s often less than $10,000. Royalties aren’t always offered, and most expenses aren’t covered. … Authors are occasionally asked to sign nondisclosure agreements before even viewing a contract.” – The New York Times

“Over the next few weeks voters will face a deluge of information aimed at swaying them for or against a quarter-cent sales tax hike in Mecklenburg County. The controversial measure would bring an additional $50 million annually to fund the arts, education and parks in the region.” – Charlotte Agenda

Celebrities have always used their social-media accounts as confessional booths, but at some point in the past year Instagram stars began interrupting their otherwise aspirational feeds with a very specific type of revelation—posts that could be described as the “getting real” moments. – The New Yorker

Published in September, Lara Prescott’s The Secrets We Kept tells of how the CIA planned to use Doctor Zhivago as a propaganda tool during the cold war. But Anna Pasternak revealed in the Sunday Times that she had sent a legal letter to Prescott, claiming that the novel features “an astonishing number of substantial elements” copied from Pasternak’s 2016 biography Lara, which is about Olga Ivinskaya, Pasternak’s lover, muse and inspiration for his character Lara. – The Guardian

“In [Soft Power], a stand-in for Hwang named DHH is hired by a Chinese producer to try to stage a theatrical production in Shanghai. Then, after a stabbing that mirrors Hwang’s own, he falls into a coma and imagines a full-blown future production of a Chinese musical about an intrepid Chinese producer who meets Hillary Clinton and teaches lessons from the communist perspective about screwed-up American democracy. There’s also, of course, a ‘Getting to Know You’-style lesson scene, but about learning to distinguish tones in Mandarin.” – Vulture

One small silver lining is that artists feel less pressure to churn out commercial material, freeing them up to experiment. “We are not expecting anything,” he says. “There are no big returns from the market during a time of economic collapse, which makes everyone feel more free to create and do as they want.” – artnet

With more than 22,000 works hanging in the chain’s roughly 1,300 restaurants, Nando’s is arguably the best place in the world to check out work by contemporary South African artists. And the chain’s Creative Block program, run with the Spiers Art Trust, may be the largest corporate art initiative anywhere. – The Art Newspaper

The MacArthur-winning modern choreographer is creating a new solo on the star ballerina for the opening of this year’s Fall For Dance festival in New York. Brian Seibert talks with the two of them about working with each other for the first time. – The New York Times

A collective called Culture Declares Emergency argues that the new funding strategy proposed by Arts Council England “neither addresses the urgency of the climate and ecological emergency nor grasps the chance to trumpet boldly the pivotal role arts and culture play in bringing about societal changes needed to avert disaster.” – Arts Professional

Anne Midgette: “No figure in classical music is more iconic than the conductor, or more misunderstood. … No job in music is harder to quantify, and no job is, when it’s done well, more important. So here’s a brief look at the function of the conductor.” – The Washington Post

“[She] painted bold, colorful works, often inspired by nature or music, and traveled in the same circles as Jackson Pollock, Willem de Kooning and other artists who were redefining painting in the years after World War II. … [But her] vivid description [of Pollock] conveys what women trying to make a name for themselves in that world were facing.” – The New York Times

“The Minneapolis Institute of Art named an art expert with a entrepreneurial past Tuesday as its next director and president: Katherine Luber, of the San Antonio Museum of Art. … Luber, who has led the San Antonio institution for eight years, possesses not only a Ph.D. in art history but an M.B.A. and experience launching an organic spice company.” – The Star Tribune (Minneapolis)

The orchestra names Chad Smith new chief executive of the orchestra, succeeding Simon Woods. “In a sign of how awkward the upheaval has been, and how quickly the change of leadership was put into place, Mr. Smith declined to be interviewed, which is rare for the incoming chief executive of a major orchestra.” – The New York Times

Inventors are significantly more productive when they are working in larger geographic clusters. The study finds that when inventors move from a smaller to a large cluster, they experience increases in both the number of patents they generate and the impact of those patents, based on their subsequent citations. – CityLab

Peter Ditto created a survey website to learn to what extent different moral frameworks shape outlooks on political questions, and indeed the greater world. His findings were compelling, but likely unsurprising if you’ve ever had an irreconcilable political squabble at the dinner table: it’s our moral filters, not facts or rational thinking, that mould our ideological outlooks. – Aeon

The process and the permanence of recording never seemed to entirely sit well with her. There are some likely treasures out there somewhere that we’ve never gotten to hear. – David Patrick Stearns

Does anyone still wear – gloves? A lady’s elegant, elbow-tweaking white gloves? Or a gentleman’s svelte riding gloves? Spot these on stage, my friends, and you can rest assured that you are safely encased in the genteel past. Dickens World. Downton World. Best of all, Austen World. At least, that’s how it seems when The Watsons begins. – David Jays

One of my Twitter followers asked over the weekend if I’d post a list of my favorite film scores. This is, needless to say, an impossible task, but I did spend a few minutes drawing up the following roster. – Terry Teachout

Speaking on the podcast Coffee With Kenobi, the executive producers of the chidren’s animated series Star Wars Resistance said of the characters Orka and Flix, “I think it’s safe to say they’re an item. They’re absolutely a gay couple and we’re proud of that.” – The Guardian 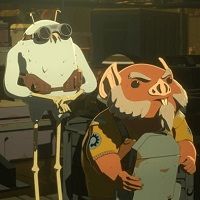