“[It’s] one of the most overlooked success stories in our field: how a century-old theatre of color, once in a state of crisis, has been revitalized and rejuvenated. In a time when there are questions about the durability of theatre organizations, Karamu House’s journey over the last four years serves as a case study to the importance of management and leadership operating in tandem to pull the company from the brink of collapse.” – American Theatre

“Dancer, choreographer and dance professor Leah Glenn wields that strong magic [and dance] to teach, increase understanding and make all lives better. And so it is no surprise that in 2012 when Glenn first considered designing a study abroad program to Cape Town, she knew dance would be more than a physical activity to complement coursework. ‘I wanted to use dance as a lens to look at social justice issues,’ she said.” – The College of William and Mary

“He got hooked on the idea that movie title sequences could be more than just ‘book covers,’ as he once described it, and he parlayed that concept into a 50-year career designing title sequences for more than 500 movies … [and] scores of television shows” — from The Searchers to the Godfather series and from The Dick Van Dyke Show to Dallas. – Los Angeles Times

A new book by classicist and historian Andrew M. Riggsby investigates the types of information technologies (IT) drawn, painted, and inscribed on the surfaces of the ancient Roman world and explores how they shaped the daily life of Romans. As Riggsby demonstrates, effective graphic design has been a tricky but important ability for thousands of years. – Hyperallergic

“What started as a quiet digital backwater is now increasingly growing in prominence, drawing the attention of audiences and moneyed interests alike. … And the story of how we go here can be told via two major turning points: The first was everything that happened before and after 2014. The second turning point is happening right now.” – Vulture

Radio Ambulante has a Facebook group with thousands of members in more than 19 countries. Editors there decided, “Let’s go back to the first place and do this but offline. We don’t want to have Facebook in between you and other listeners.” So they’ve organized listening clubs (the podcast equivalent of book clubs) for people to meet in person, listen to Radio Ambulante, and discuss what they’ve heard. – Nieman Lab

Richard Brody: “Though he didn’t have the most immediately recognizable or ravishing sound at the keyboard, he succeeded in revising, by way of scholarly passion, the very basis for pianistic sound and beauty — and, for that matter, the physical relationship of pianists to their instruments.” – The New Yorker

The president’s project, called 1000 Cafés and run by a nonprofit called Groupe SOS, will receive up to €200 million from the French government to open new cafés, or prop up struggling ones, in villages with fewer than 3,500 residents. Nearly a third of France’s population still lives in such villages, and more than half of those no longer have a commercial establishment of any kind. – Slate

After cutting the mass market paperback and graphic novel/manga lists in 2017, the Times‘ Best Sellers team will again track mass market paperback sales, as well as debut a combined list for graphic books, which will include fiction, nonfiction, children’s, adults, and manga. Two new monthly children’s lists, middle grade paperback and young adult paperback, will debut as well. (The Times retired its middle grade e-book and young adult e-book lists in 2017.) In addition, the Times will cut its science and sports lists, explaining that “the titles on those lists are frequently represented on current nonfiction lists.” – Publishers Weekly

Interest in sound therapy has soared in tandem with renewed global curiosity about cosmic energy and spirituality. Case in point, sales of “healing crystals” have doubled in the previous three years. – Pittsburgh Post-Gazette

What’s being done with the rubble, the windows, and the stabilization of the walls; who is, and who will be, running the restoration effort; what the next steps will be; and the general philosophy behind the work. – The Art Newspaper

The violinist was playing the slow movement of the Beethoven concerto with the Cincinnati Symphony when she saw a woman recording with an iPhone in the front row. “With the phone such a few feet from her face, Mutter stopped the performance and asked the woman to stop. Instead of stopping, the woman attempted to engage Mutter in a conversation. The audience was stunned.” (For Janelle Gelfand’s eyewitness report and review of the concert, click here.) – Cincinnati Enquirer

“Ms. Norman, who found acclaim as well as a recitalist and on the concert stage, was one of the most decorated of American singers. She won five Grammy Awards, four for her recordings and one for lifetime achievement. She received the prestigious Kennedy Center Award in 1997 and the National Medal of Arts in 2009.” Metropolitan Opera general manager Peter Gelb called her “one of the greatest artists to ever sing on our stage.” – The New York Times

The Ontario Film Authority was designed to operate on a cost-recovery basis, charging filmmakers fees for issuing ratings such as PG, 14A or Restricted. Its most recent annual report shows the agency brought in $2.2 million in revenue, but ran a shortfall of $130,000.  – CBC

Myriad issues are to blame. Donors’ funding priorities have changed, and corporations are donating less to nonprofit theaters, making the fight for funding more competitive. High-quality entertainment can be accessed on-demand at low cost. Arts journalism has become more sparse, and the public, concerned about an economic slowdown, might be less inclined to show up. – Crosscut

The most notable thing about Barrie Kosky’s production of Handel’s Agrippina at the Royal Opera is that every member of this ensemble can act — especially Joyce DiDonato, giving what I expect will be remembered as an historic performance of the title role. – Paul Levy

Heidi Hall, an old friend of mine from Smalltown, U.S.A., died last week. She was 49, far too young for so extravagantly vital a woman to lose her life to cancer. I, on the other hand, am 63, which isn’t nearly as old as it was a few generations ago. Why did people back then seem to age so much more quickly than they do now? – Terry Teachout

With chronic illness, rigidity in your thinking and behaviour is the greatest barrier to living well with your illness. The only thing you can count on is the fact that you never really know what your day is going to look like, and that things are always changing. – Aeon

Mark Swed: “I’m not so sure I buy the mystique business. The ego issue is clearly complicated. But his two concerts in the Festspielhaus in Salzburg, the first a repeat of the Beethoven Ninth and second featuring a performance of Schoenberg’s Violin Concerto with Patricia Kopatchinskaja of speechless greatness, left no doubt about just how special Petrenko is.” – Los Angeles Times 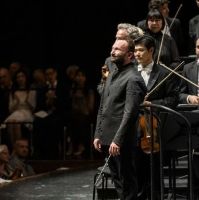