There is no time for being artsy or coy, one might argue, when so many people are dying. This project also reveals a certain degree of modesty on Weems’ part — almost no one who drives past the billboards will know that an artist is responsible, as her name only appears in small letters at the bottom of each frame. – Dallas Morning News

The writer-diplomat tradition, though largely ignored in the history of letters, has been critical to the development of many European and Latin American writers. Eight poets with diplomatic experience, including Octavio Paz and Czeslaw Milosz, have won the Nobel Prize for Literature. – Robert Fay

Well, one kind of poetry in particular — that of Rupi Kaur, who is so popular that her most recent collection knocked Dr. Seuss off the top of Amazon’s poetry bestseller list. (Her two previous books are no. 5 and no. 8.) “For Kaur’s publisher, Andrews McMeel Publishing, this kind of immediate market impact has become customary.” – Publishers Weekly

Frequent arts attendees’ online engagement with culture has boomed during the lockdown, more than doubling to 59% by July, according to analysis of Indigo’s After The Interval sentiment tracker survey. Altogether, 82% of the 130,00 respondents said they would consider engaging with online events in the future – and 70% were willing to pay to do so. – Arts Professional

There is something incongruous about the attendance of the lavishly dressed, moneyed elite at public concerts of Beethoven symphonies or concertos, given his music’s expression of such a revolutionary, democratic, humanitarian spirit. Such are the ironies that result when the historical specificity of art is denied or forgotten and all that is left is a vague feeling of aesthetic enjoyment. Still, even the pure aesthetic enjoyment is significant. – Dissent

To watch them, you have to subscribe to BalletX Beyond, which also gives you access to premieres later in the season, along with extras like interviews and making-of documentaries. The cheapest plan is $15 a month — less than a ticket to a live show but almost as much as premium Netflix. It’s a necessary experiment, especially for companies without huge endowments. Somebody has to figure out how to get people to pay for digital dance. – The New York Times

Attenborough stated the reason he decided to join Instagram simply: “The world is in trouble. Continents are on fire, glaciers are melting, coral reefs are dying, fish are disappearing from our oceans. The list goes on and on,” he said. “But we know what to do about it, and that’s why I’m tackling this new way of communication.” – NPR

Britain’s Queen Elizabeth and her family are facing a 35-million-pound ($60 million Cdn) hit from the coronavirus pandemic, partly due to a shortage of tourists, the monarch’s money manager said Friday. – CBC

For those who never manage to create an iPhone playlist that delivers the right thing at the right time, Pulitzer Prize–winning composer Ellen Reid and the New York Philharmonic have created Soundwalk, a free app that plays music through your phone, programmed for each section of the park. A built-in GPS knows right where you are and how to give the setting an extra atmospheric layer, whether earthy or ethereal, which evolves with whatever way you turn. – WQXR

What is on offer from our stages, via podcasts, Zoom presentations, and the rare live productions? Mostly escapes to comfy territory rather than confrontations with the difficult present. These approaches often reflect a yearning for the ‘old normal’ via a focus on Boston’s history. – ArtsFuse

“What an honour it is to be the first Indigenous winner of the Archibald prize,” he said. “It only took 99 years. I’m so proud to be the first but I also have to acknowledge all the Indigenous finalists and Indigenous sitters for this year and past years.” – The Guardian

After announcing the lineup, judge and novelist Lee Child said The Mirror and the Light was “an absolutely wonderful novel, there’s no question about it”, but “as good as it was, there were some books which were better”. – The Guardian

“The shuttering of performances as well as furloughs of performers and stagehands helped save the Met some money and stem losses, and a boosted digital presence in the form of nightly streams, virtual galas and pay-per-view recitals has attracted 30,000 new donors, allowing the company to end the fiscal year in July with a balanced budget.But with a season clear of performances ahead, the Met is now an organization reliant on donations. It’s disconcerting to say the least, to see the world’s largest performing arts company struggle to keep its balance.” – Washington Post

Sited on a woodsy 7.5-acre lot, the spacious 6,200 sq. ft. residence was directly inspired by a trip to Japan Brubeck took on tour nearly 60 years ago — one might say he was impressed. Upon his return to the states, the jazz master commissioned his friend, architect Beverly David Thorne, known for his expert ability to build beautiful homes on challenging terrain, to create a Japanese-inspired midcentury modern estate. There are 8 bedrooms and 5.5 bathrooms. – Variety

Male white-crowned sparrows around the San Francisco Bay Area exploited the sudden drop in anthropogenic noise when the region went on strict lockdown in April and May. From their field observations during previous years, the researchers had lots of data to show that urban birds sacrifice song quality for higher amplitudes—basically, they’re yelling to be heard in a noisy environment. When that din suddenly died down, the birds switched to songs that more closely resemble the softer, higher-quality calls of their nearby rural counterparts. – Wired

“What those who criticize this decision do not understand is that in the past few months the context in the U.S. has fundamentally, profoundly changed on issues of incendiary and toxic racist imagery in art, regardless of the virtue or intention of the artist who created it.” – The New York Times

“The Institute for Counterfeit Memory” cannily employs the devices it provides to bring you back to the feeling of being in a room with other spectators, even as it reminds you that you are alone. Its ministrations so impressed me that when I turned over the final cue card instructing me to applaud, I actually did. – Washington Post

“Rio’s League of Samba Schools, LIESA, announced Thursday night that the spread of the coronavirus has made it impossible to safely hold the traditional parades that are a cultural mainstay and, for many, a source of livelihood. … And while the decision is being characterized as a postponement of the event, no new date has been set.” – AP

The Rise and Rise of Michael Rimmer, a British film that featured Peter Cook, Graham Chapman and John Cleese of Monty Python, and Harold Pinter (as a vicious talk-show host), ended up coming out about six months too late for the British election it was meant to skewer. “[But] for today, the film’s observations on the intersection of media and politics seem uncannily prescient, anticipating the triumph of two populists on opposite sides of the pond: Donald J. Trump and Boris Johnson.” – The New York Times

“Firefighters worked for seven hours to put out the fire on Thursday afternoon and were still there on Friday morning. According to the Emergency Situations Inspectorate, the flames burned an area of about 3,500 square metres, reducing much of the interior to ashes.” – Balkan Insight 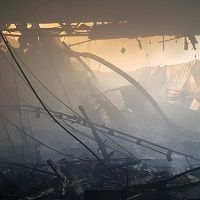