“Design is one of our most powerful tools in the COVID-19 crisis. The ingenuity, resourcefulness, and generosity of designers and their collaborators worldwide has produced innovations that are helping to protect us from the pandemic, to improve its treatment and to prepare for the radical changes it will introduce to our lives in the future.” – Fast Company

The centuries-old three-stringed lute, a mainstay of traditional Japanese art music, remained popular up at least to the turn of the millennium, but most of the remaining players today are well over 60. With the pandemic paralyzing an already shrinking market, the country’s largest shamisen maker was about to close when it was rescued (for now) by an online fundraising campaign. There’s some hope that a newer style called tsugaru shamisen, livelier and less austere than the genteel music of Kyoto geishas, can keep interest in the instrument alive. – The Observer (UK)

Lindsay Posner writes about how, stuck in London thanks to pandemic travel restrictions, he fulfilled his contract to direct Twelve Angry Men in Tokyo, thanks to Zoom and an ace translator and assistant director. – The Guardian

“For almost a century, the lighthouse, near the Cantabrian town of Ajo, was a mute, monochrome sentry beaming its light out over the Atlantic. Now … the 16-metre tower is a collision of colours, geometric shapes and animals, which is intended to boost visitor numbers to one of the lesser known spots on the [northern] coast of Spain.” – The Guardian

Ever since Theresa May announced a huge national event celebrating our departure from the EU, set for 2022 and with a budget of £120m, it’s acquired that nickname, suggestive of drizzle, stale pies and being forced to listen to Rule Britannia (with the words) on loop. Even the organisers are keen to stress that the current working title is actually Festival UK. – The Guardian

“Before Martha Stewart and Marie Kondo were giving advice on household design, before Julia Child was teaching the art of French cooking on television, there was Terence Conran. … He took his ideas around the world and once owned an empire of 90 stores with annual revenue of more than $2 billion. Calling himself a ‘hard-working hedonist,’ he opened more than 50 restaurants, wrote more than 40 books, ran a design studio and later an architecture and urban planning firm. All of it was built on the simple idea that good design leads to better living.” – The Washington Post

Peter Dobrin: “We should think of this as a research-and-development phase long overdue. Online performances won’t sink or swim based on how well they replicate live ones. … More important … is the question of whether a new breed of production designers and directors can give viewer-listeners something different from live performance.” – The Philadelphia Inquirer

The European Union was a remarkable human artifact—still is. And for us to smash down our part in it is . . . I suppose you just have to expect that people can’t sustain positive actions for very long. Sooner or later, they just want to behave badly and do something very simple, kick something or hit someone. – The New Yorker

Americans in particular are small-talk artists. They have to be. This is a wild country. The most tenuous filaments of consensus and cooperation attach one person to the next. So the Have a nice days, the Hot enough for yous, the How ’bout those Metses—they serve a vital purpose. – The Atlantic

The dance group, who won the talent show in 2009, took to the stage with a politically charged performance during the ITV show’s semi-finals this month. It depicted a white police officer kneeling on the Diversity star and temporary BGT judge Ashley Banjo, echoing the killing of the unarmed black man George Floyd in the US. – The Guardian

The time-bending sci-fi thriller Tenet generated $6.7 million in the U.S. and Canada during its second weekend of release, representing a 29% drop compared to opening weekend. Initially, Warner Bros., the studio behind “Tenet,” touted a $20 million debut. But a closer dissection of those numbers reveal they were heavily spun to include weekday preview screenings and the long holiday weekend. In reality, “Tenet” only made about $9 million between Friday and Sunday. – Variety

Responding to a post on social media about Chinese-American relations a few months ago, he typed in the image of the smiley pig face — “the cute one,” Yi-Wen Jiang said — and went about his day. But his posting soon caused an outcry and he was called a bigot for what his critics said was his effort to deride the Chinese people as pigs. Within days, Mr. Jiang had lost his job and, he said, his reputation. – The New York Times

The next day, back home in Brooklyn, I watched the livestream of the Saturday evening show, curious about the difference. In truth, the virtual experience was in some ways an improvement. The frame of the camera, like the arch of a proscenium stage, brought a focus and a sense of proportion to the choreography that it had lacked outdoors. “Natural History,” I thought, is a theater dance without a theater. – The New York Times

When Ms. Howe began teaching in colleges and universities in the 1950s, women’s studies was not an established academic discipline. In fact, it was rare to find a course catalog or syllabus that mentioned scholarship by women at all. With the Feminist Press, founded in 1970, she sought to diversify the materials used in schools around the United States and beyond. – The New York Times

That’s right — 28 years after the Milton Friedman doctrine began the paradigm shift that made U.S. big business more powerful than ever, he was still insisting, as he had in his essay, that businesspeople with any willingness to pay a price to make society more fair were indulging “a suicidal impulse.” Which wasn’t just untrue, but by then more like the opposite of true: After the New Deal saved U.S. capitalism from its own excesses and helped enable decades of ultraprosperity and increasing equality, the full Friedmanization of our economy for the last four decades has generated such greed-driven extremes of inequality, insecurity and immobility that the system is now on a path that looks crazily self-destructive. – New York Times Magazine 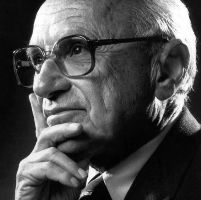