Two burglars cut through a fence at the artist’s Paris property and tried to take apart one of his sculptures made from the now-removed old lead roof of Cologne Cathedral, probably to sell the metal; they were scared away by a security guard. (In 2016, thieves tried to steal another Kiefer sculpture at his suburban Paris warehouse; they didn’t cart it away, but they did serious damage.) – Yahoo! (AFP)

Are we reducing everything we translate to standard English, whatever that might be? Or are we struggling to get close to the otherness of foreign texts?  – New York Review of Books

“A federal appeals court attempted to close the book on endless litigation between the relatives of author John Steinbeck in a ruling that upheld a $5 million verdict against his daughter-in-law, but threw out $8 million she faced in punitive damages.” – Yahoo! (AP)

“‘We are as close to a town square as Oakland has,’ says Lori Fogarty, the director and chief executive of the Oakland Museum of California, founded 50 years ago by the city as a ‘museum for the people’ and bringing together the art, history and natural sciences of the region. The museum is keeping that inaugural faith with a campaign to raise $85m for a renovation and landscaping project, as well as exhibitions and other initiatives to make the museum more welcoming to visitors in one of the most diverse cities in the US.” – The Art Newspaper

Sontag’s fraught relationship with her body wasn’t simply about physicality; it was about her tormented relationship to need itself—her shame at having needs in the first place. – The New Republic

It’s a quiet war, but it’s fierce. Macmillan is planning to block libraries from buying more than one digital copy of new books for eight weeks after the book comes out, starting in November. The claim: That library ebooks cannibalize book sales. But “studies consistently show library patrons to be more frequent book buyers overall—which is another reason Macmillan’s letter stung.” – Slate

“The music itself is not the problem, in fact it’s what we do best—it’s our core product. Yet so many organizations think that if we change the product, it will help the bottom line, but it won’t.” – New York Observer

An Armenian born in Iran and raised in Iraq, Martin came to New York to study and met Scorsese in the early 1960s. He worked on the director’s first feature (Who’s That Knocking at My Door?) and documentary (Italianamerican) and co-wrote Mean Streets; New York, New York; The Last Waltz; and Raging Bull. – Variety

“The state has reached the benchmark for ‘universal arts education access’, meaning each one of its public schools provides some type of school-based arts instruction during the school day for all students.” However, as one official said, “Our work remains undone”: as of 2018, only 81% of students were actually enrolled in arts instruction of any kind. – Hyperallergic

Fewer Americans are volunteering their time and money on a regular basis, according to the report. The national volunteer rate has not surpassed 28.8 percent since 2005, and in 2015, it dipped to its lowest, at 24.9 percent. – CityLab

Magnus is part of a wave of smartphone apps trying to catalog the physical world as a way of providing instantaneous information about songs or clothes or plants or paintings. First came Shazam, an app that allows users to record a few seconds of a song and instantly identifies it. Shazam’s wild success — it boasts more than a billion downloads and 20 million uses daily, and was purchased by Apple for a reported $400 million last year — has spawned endless imitations. There is Shazam for plants or Shazam for clothes and now, Shazam, for art. – The New York Times

“He’s just completed a residency at the Belhaven University Dance Department in Jackson, Mississippi, and teaches ballet around the state, where he resides in a small town outside Hattiesburg.” (Yes, he drives himself.) The Today show pays Danton a visit. – NBC News

“Giving money to higher education amplifies a billionaire’s legacy. The money greases hiring decisions and shapes curriculums, and it can ricochet across the wider culture for decades, even after the billionaire himself has shuffled off this mortal coil.” – The New York Times

Musicians say that his uncompromising approach to music — he is famous for marathon rehearsals and recording sessions, and for late-night salons where guests recite poetry, play music and talk until all hours — has almost mystical effects. – The New York Times

Aaron Peckham started the site back in 1999 at least partly as a joke, but it quickly became a genuinely valuable reference, with users constantly submitting and updating definitions for slang expressions and explanations of memes. What happened? – Wired

Jeremy O. Harris’s Slave Play “often funny and pervasively unsettling, examines that lingering wound [of American slavery] through the frustrated sex lives, and taboo sexual fantasies, of three contemporary interracial couples. … An internet-based backlash, seemingly fueled by people who had not seen the play, was threatening enough to require stepped-up security” for its Off-Broadway run. “Many of the participants still can’t quite believe this play, on Broadway, is happening.” – The New York Times

This past summer, an extreme drought in the Extremadura area of Spain that caused the Valdecañas Reservoir’s water levels to plummet has revealed a series of megalithic stones. – artnet

Ryan Bancroft, a 29-year-old native of Long Beach who studied at CalArts, discovered classical music through a one-minute clip of Beethoven pre-loaded on his family’s first computer, and he cites as a chief influence Ghanaian dancing. – The Telegraph (UK)

“I’ve seen it many times when I’m conducting, and I see young children of various colors sitting in the front three or four rows,” says the new music director of the San Bernardino Symphony in California and the conductor of the historically Black orchestra Southeast Symphony in Los Angeles. “You can just tell, it’s like: ‘Wow, that’s not what I was expecting to see come around the corner.'” – Los Angeles Times

“We are witnessing a great convergence between politics and culture, citizenship and commerce, ideology and aesthetics. Civic participation has been converted seamlessly into consumer practice. … Elizabeth Warren is cast as a Harry Potter character and Kamala Harris is sliced into a reaction GIF. … It is democracy reimagined as fandom, and it is now a dominant mode of experiencing politics.” An essay in nine parts. – The New York Times

From Cannes to Shanghai to Park City to Toronto, these events bring in visitors, create jobs, build a city’s brand, and nurture culture. On the other hand, they can drive up prices, strain the environment (Venice), and attract interference from the authorities. On yet another hand, they can put a spotlight on important issues and provide a lifeline for minorities (as with the queer film fest in Jakarta). – The Guardian

Management had Meyerhoff Symphony Hall open and ready for rehearsal for this weekend’s scheduled season opening, but the musicians say they won’t play without a contract — and they’ve now rejected both management’s proposed one-year contract for a 40-week season (with only a slight decrease in pay from the previous 52-week contract) and an offer to extend the expired contract through Dec. 31 and keep negotiating. – The Baltimore Sun

“The sculpture was almost certainly stolen in the early 1960s from the ancient Maya site. It passed through the inventory of a prominent Los Angeles gallery on its way to Paris. Its illicit history is no secret, yet the sale in France is scheduled to proceed in broad daylight.” – Los Angeles Times

“For all the achievements, one gets the sense that Gagosian still enjoys the hustle. He’s certainly in no rush to retire. He’s still signing new artists, still staging exhibitions, still offering the kinds of insights that only a lifetime spent at the highest echelon of the art world can produce.” – GQ

When I attended the celebratory press conference in 2015 that announced multiple major benefactions to the Met’s Asian Art Department, little did I know that a few years later the Met would auction off a good chunk of those lauded gifts. – Lee Rosenbaum

The beginning of a new academic year feels like a good time to work on making all of these resources more widely known. ArtsEngaged has the following available for people in the field who want to support community engagement. – Doug Borwick

“I haven’t made anything for three years. First, there is no money, second the job has tilted so much towards administration there is no time to make stuff. I have always said there are two different kinds of AD – those that choreograph and those that don’t. At certain times in a company’s history you will need one or the other. At this point in my life I simply want to make dance. I’m happy not to be a director any longer. I don’t want to be stuck in an office again.” – The Stage

Kate McLeod, Head of School and Teacher Services at Atlanta’s High Museum of Art: “One of the High’s overarching goals in the past few years is to grow and expand inclusive programming for all visitors, including students on the autism spectrum and students with visual impairments. And who better to partner with then our next-door neighbors, [the Center for the Visually Impaired]?” – Americans for the Arts 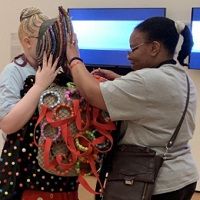