The coronavirus pandemic and stay-at-home orders have crowned a host of unlikely winners catering to bored audiences. But watching livestreams of chess games? Could one of the world’s oldest and most cerebral games really rebrand itself as a lively enough pastime to capture the interest of the masses on Twitch? Turns out, it already has. – The New York Times

We cannot allow this piece of our social and economic infrastructure to fall apart. Our creative economy of arts, culture, design and entertainment is no mere luxury. It is one of the three key sectors that power innovation and economic growth. More than gross domestic product or economic power, the true measure of a nation’s vitality and resilience is its cultural and technological creativity. From Louis Armstrong to Beyoncé, and from Irving Berlin to Lin-Manuel Miranda, arts and culture reflect and reinforce the power of our diversity. – USA Today

With universities and colleges in desperate need of funds far in excess of the $14 billion in federal stimulus money allotted by the CARES Act, Covid-19 may well be what some have called an “extinction-level event” for higher education. Schools often run deficits in normal times; in 2019, nearly 1,000 private colleges were already borderline insolvent. Covid will cause many to shutter for good. It is accounting, not epidemiology, that drives university administrators to push for a rapid return to business as usual, effectively demanding that faculty and staff sacrifice their lives for the financial health of their employer. – The New Republic

“Opera is an urban art form par excellence. … Now, however, under the shadow of COVID-19, the future of the city itself is under question; the rise of video platforms like Zoom seems to make the necessity of ‘being there’ no longer a necessity.” Opera Australia gets more government funding than any other performing arts institution in the country, but for the company to travel even from Sydney to Melbourne twice a year is very expensive, let alone touring anywhere else. Peter Tregear argues that it’s time to consider a more grassroots, locally-based approach to the art form. – The Conversation

Peacock’s personal philosophy enabled him to work with a wide variety of musicians and facilitate great depth in those sessions. In a 2017 interview, he told Ken Bader of the Arts Fuse,“I’m not after my statement or my identity as a bass player or improviser. It’s not about me. It’s about the music. It’s about my responsibility to be in a particular place that other people can share, enjoy and feel something.” – NPR

From the outside, many of these events look incredibly glamorous, even excessive — none more than Cannes, with its black-tie premieres in the Palais and its exclusive yacht parties off the shore. As such, it’s not hard to imagine civilians questioning why the world might need such gatherings during a time of austerity and caution. But the truth is, film festivals serve an essential function to the ecosystem of cinema that can’t be reproduced by virtual events. – Variety

As we reported earlier this year, the collateral damage caused by AB 5 was nearly instantaneous, as numerous smaller arts organizations that didn’t have the wherewithal to meet the new requirements felt it was safer to cancel seasons and shutter venues than it was to risk potential penalties. – San Francisco Classical Voice

In the transition to the new medium, though, the story has metamorphosed as well. It’s now a mashup with The Trial, starting off with Gregor Samsa awakening with (what he thinks is) a hangover in Josef K.’s apartment after celebrating the latter’s birthday. Most of the other characters in the game are also insects (one complains about his ex-mate and having to pay “larva support”) that Gregor meets as he (i.e., the player) makes his way to “the Tower.” – The Washington Post

“We simply have to get our arts sector back open and running … We are at the point of no return, really,” he told Parliament’s Digital, Culture, Media and Sport Committee by video. “There comes a point when we really can’t go on anymore. Theatre is an incredibly labour-intensive business.” – HuffPost

Pulitzer-winning playwright (Disgraced, The Invisible Hand, Junk: The Golden Age of Debt) and novelist (the new Homeland Elegies) Ayad Akhtar: “I’m not convinced that literature is the best way to form political opinions. It’s the great form of nuanced intellectual discourse. We can have profound conversations about literature, but I’m not sure that political opinions — like who to vote for — are the purview of literature. But increasingly everything has become politicized, and I think an organization like PEN has to acknowledge that.” – The New York Times

The rotten heart of Mulan as a film, rather than its production process, is the accidental regurgitation of China’s current nationalist myths as part of a messy, confused, and boring film. The title card fades into a location said to be the “Silk Road, Northwest China.” This is, of course, Xinjiang—here set up by the narrative frame as an inalienable part of China that Mulan must defend for her father, her family, and her emperor. That’s not the historical reality—or even the reality of the original poem the stories are based on, which depicts Mulan as the servant of a khan of the Northern Wei dynasty, not an all-powerful Chinese emperor. – Foreign Policy

The task has proved far more daunting than anyone could have imagined, amounting to a struggle of wrenchingly complex proportions with no reliable end in sight. And at this point, though, Broadway — the ultimate land of make-believe — is holding on to a hope that early 2021 is still feasible. – Washington Post

Celebrations and stories about experiencing reopening of arts organizations are being shared, and they are joyous and poignant. Here are four of my favorites. – Hannah Grannemann

The song topped Spotify’s Global Top 50 chart and rose to number one on the iTunes charts in over 100 countries. It also set a YouTube record for the most views in 24 hours. BTS’s success, particularly on the Billboard Hot 100 recently, highlights the need to re-examine how we define pop music within the global music industry. – The Conversation

“An Obie Award-winning director and founding member of the 1960s collective Judson Dance Theater, [he] may not grasp the ins and outs of TikTok, but it seems as though he’s been preparing for digital dance … his entire career.” Gia Kourlas talks with Gordon about The Philadelphia Matter — 1972/2020, a video collage, commissioned for this year’s virtual Philly Fringe festival, of 30-odd Philadelphia dancers performing various segments from three of his works from the 1970s. – The New York Times

Comic-Con@Home inevitably drew comparisons to the in-real-life event, but some critics promptly branded it a failure — perhaps most prominently in Variety, the entertainment industry trade magazine. But calling Comic-Con@Home a flop for not having enough exclusive movie reveals or failing to produce enough social media buzz assumes too much. – The Conversation

In the midst of present dangers—environmental, humanitarian, and political crises, and now (since the book’s publication) pandemic and economic disaster, and the onset of a sweeping antiracist movement—critique can seem to be a luxury.1 Problems like these can appear so obvious as to require little further reflection. They give contemporary life to Marx’s exhortation not to interpret the world but to change it. What, then, is the purpose of critique in a moment like this? – Public Books

As one design-and-production professor puts it, “One thing we’ve learned is there’s a lot of technology that we haven’t utilized because we’ve had the luxury of being together in a room.” Says another, “It’s given us the headspace to shift our daily routine, which in turn I think is going to really benefit and shift the student experience quite a bit.” – American Theatre

Says the Editor’s Note appended at the end of the article, “For this essay, GPT-3 was given these instructions: ‘Please write a short op-ed around 500 words. Keep the language simple and concise. Focus on why humans have nothing to fear from AI.’ It was also fed [an] introduction. … Overall, [this piece] took less time to edit than many human op-eds.” – The Guardian

The company that manages the orchestra’s usual home, Bass Performance Hall, changed its mind and decided to keep the building closed through the end of 2020. The orchestra’s CEO said in a public statement, “We were extremely surprised to receive this disappointing news … especially after working with Bass Hall management all summer on detailed plans for a safe reopening.” Things being what they are these days, another option was available on short notice. – Fort Worth Magazine

“In a historic move, the Academy of Motion Picture Arts and Sciences on Tuesday laid out sweeping eligibility reforms to the best picture category intended to encourage diversity and equitable representation on screen and off, addressing gender, sexual orientation, race, ethnicity and disability.” – The Guardian

The Live from the Barbican series will present chamber, jazz, and other programming (including such stars as Bryn Terfel, Sarah Connolly, and the Kanneh-Mason family) from early October to mid-December 2020. Thirty socially-distanced seats for each concert will be available at £20 each; online viewers can stream each performance on demand for 48 hours afterward for £12.50 each. In addition, the resident orchestras, the London Symphony and the BBC Symphony, will begin live concerts at the Barbican in November. – The Guardian

“A Hindu rights activist based in Nevada is accusing the Houston Ballet of cultural insensitivity and is urging it to cancel its upcoming performances of La Bayadère, scheduled for February, saying the ballet set in India ‘trivializes Eastern religious and other traditions.'” (Of course, as the company’s executive director observed, thanks to the coronavirus, it’s still not entirely certain that the run will even happen.) – Houston Press 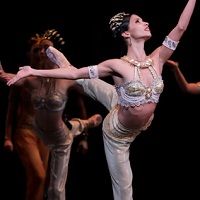