“The engagement with music is one of the most universal activities of humans that does not have a direct link to our survival as a species. Nobody ever died from music depravation, yet we work and worship to music, dance and court to music, make love and relax to music, rejoice and grieve with music. With the developments in migration, travel and technology over the past 70 years (which in retrospect we will probably regard as the most significant period of musical change of the past two millennia), two important things have happened.”

Bob Mankoff, until recently the magazine’s cartoon editor, had the idea in 1992 to make a business of collecting and licensing all the submitted cartoons that weren’t accepted for publication. Under his stewardship, the Cartoon Bank’s business thrived (especially once the Web came along), with revenues at one point reaching $7 million annually. Half of those revenues went to the cartoonists, giving their often-meager incomes a badly-needed boost. Then, in 2008, Mankoff handed off the running of the Bank to Condé Nast. Reporter Seth Simon tells the sad story of what’s happened since.

“Any brown person who’s taken a selfie in the club can tell you cameras aren’t made for us. Yet in Insecure‘s club scenes, dark-skinned protagonists like Yvonne Orji’s Molly continue to impress. You can thank Ava Berkofsky, the show’s director of photography, for that. … So how do you make a show look like a piece of art while also doing justice to black faces? The answer is a special whiteboard and a light dab of shiny makeup.”

“The digital age has made everyone want to get their hands into things and get dirty and messy and make things out of clay. With that comes the voice of the hand, which is inherently imperfect.”

“Are they reading less and spending more time on activism? According to a new HuffPost/YouGov poll, the answer to that is complicated, but it suggests that Trump’s rise has done little to substantially shift the habits of readers.”

“Recent initiatives by the European Commission as well as Irish and English governments begin to recognise an alarming state of affairs for the contemporary writer. A European Commission report indicates that Irish and British writers are disadvantaged compared to some of their Euroland brethren. In Ireland a controversial pilot scheme announced in June acknowledges Irish writers as self-employed and thus permitted to seek jobseeker’s allowance. Meanwhile in the UK, the Arts Council of England (ACE) has told of its “concerns that something significant is occurring” in the realm of literature.”

“Almost a decade ago, these artists—freelancers who face stiff competition for 15 slots each week in the print magazine—could count on licensing deals for substantial passive income. Some received monthly checks as high as $8,000; others regularly saw one or two thousand dollars. Today, even those who saw the highest royalties receive only a few hundred dollars per month.”

“The Perez Art Museum Miami, The Wolfsonian—FIU, ICA Miami, Dimensions Variable, Vizcaya Museum and Gardens, and Faena Art all announced they would be closed on Wednesday and remain shut through the weekend.” Fortunately, several of these museums were specifically built to withstand extreme weather.

“What perhaps makes Walker’s story even more unusual is that while he is now arguably the eldest statesman among still-active composers, he began his career as a child prodigy. He started studying the piano at the age of five, composing as a teenager, and had become something of a cause célèbre by his early 20s. He made his New York piano recital debut at Town Hall at the age of 23 in a program of mostly standard repertoire, which also featured three of his own compositions.”

“Telling the story of the Nazi love affair with the medieval past doesn’t require blaming medievalists per se. It’s not about whether our intentions are good. … Having discovered it, the question is what to do. And the first step is to understand the myriad forms that racist engagement with the Middle Ages can take.”

Bernstein is important for many reasons, including being the first American-born, American-trained conductor to rise to fame and lead an American orchestra. But perhaps most impressive is the fact that he created lasting works of art that were informed by his commitment to social justice, but largely avoided preachiness.

The director and curator of the Smithsonian Folkways record label consulted with colleagues to identify five clusters of forces that affect the health and sustainability of various musical cultures. “[Then] nine international research teams carefully examined traditions ranging from Mexican mariachi to Korean samulnori; from Indian ragas to West African ewe dance-percussion; and from Aboriginal women’s songs in Central Australia to Western opera.”

“Pilar Abel, a 61-year-old tarot card reader and fortune teller from Girona, has spent the past 10 years trying to prove that she is the fruit of a liaison between her mother and Dalí in 1955. In June, a court in Madrid ordered the artist’s body to be exhumed after previous attempts to determine paternity had failed.” This attempt, alas for Ms. Abel, was definitive. (At least we know that Dalí’s mustache remains intact.)

“Executive director Jim Nelson said the company will stage four performances of Sir Kenneth MacMillan’s Mayerling Sept. 22-24 (including two evening shows and two matinees) at the Hobby Center for the Arts’ Sarofim Hall. It also will stage two evening performances of its postponed ‘Poetry in Motion’ mixed repertory program there Oct. 26 and 27.”

“The closing is earlier than expected – the play had been scheduled to run until Jan. 7. But the run will still have been longer than that of many contemporary nonmusical productions; at the time of the show’s closing, it will have played 30 preview and 173 regular performances.”

The shallow breathing of rational management

So much of our training, theory, practice, and focus in cultural management has to do with outcomes and processes. When we look to improve how our organizations ‘work’, we tend to choose between … read more

Planning your fall outings to special exhibitions? The season about to begin has a wealth of fascinating shows – many devoted to artists or topics that are due for much more exposure and attention. … read more

Read ’em and weep. Sotheby’s has just released the checklist (with presale estimates and sale dates) for the Berkshire Museum 40. Apparently the seller and its agent don’t believe that … read more

Demanding to be heard, now and then one of the LPs in the surviving Rifftides collection of vinyl records sends vibes — appropriately in this case. The album called Sunstroke appeared in 1979 on the … read more

The flood water compromised museum archives, caused structural damage and knocked out electricity and the Internet. How extensive was the damage? We talked with representatives and gathered information from some of major Houston’s arts centers to find out.

“The opening festivities, from 11 to 15 November, will be marked by cultural events and visits from museum directors from around the world. The café and the children’s museum will also be opened, but it will still take months before all the site’s facilities, which include a scientific center, are fully functional. The first exhibition, entitled ‘From One Louvre To Another’ and curated by Jean-Luc Martinez, will open on 22 December and will deal with the history of the Louvre in Paris.” 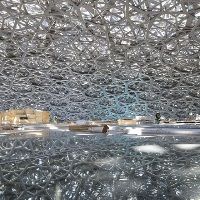