It is, as it were, a sensitive area. “Positioning a brand and crafting a suitable tone of voice is a mind-bendingly tricky thing to perfect. The Vagina Museum has built a reputation and a following on social media due to its irreverent, tongue-in-cheek tweets and exchanges with other users. Whether the branding should mirror or counteract this was a defining choice throughout the process.” – Museums and Heritage Advisor

“After a latish start as an artist — she was in her 30s — she made steady initial headway in a male-dominated Black Power movement and a white-dominated feminist movement. And she has held her own in a mainstream art market that has been, until very recently, unwelcoming to African-American art.” Now she has solo shows at flagship museums on both coasts: MoMA and LACMA. Why now? “Because,” she says, “it’s about time!” – The New York Times

“[She] overcame sexist attitudes and outright hostility to earn a place on the bandstand alongside such musical stars as Louis Armstrong, Dizzy Gillespie and Charlie Parker.” – The Washington Post

In 1993, there was a series of break-ins across the more expensive neighborhoods of Los Angeles in which dozens of paintings, antiques, and historic documents were taken. Two perps were captured year ago, but the art was lost until an auctioneer tipped off police this summer. More than 100 items have been recovered, and the issue now is finding their owners. – Los Angeles Times

“According to the 22nd annual Boxed In report from the Center for the Study of Women in Television and Film …, female characters comprised 45% of all speaking characters across comedies, dramas, and reality shows on broadcast, cable, and streaming. That is up from 40% in 2017-2018. … Off-screen, 31% of all creators, directors, writers, executive producers, producers, editors, and directors of photography in television were women, beating the previous high of 28% set in 2016-2017.” – Variety

Questions of strength and weakness have hovered around Boström Knausgård ever since the novelist with whom she shares a last name wrote, in rather excruciating detail, about their life together and Boström Knausgård’s mental illness. Because the novel—like her other fiction—draws closely from its author’s past, it will surely invite comparison with My Struggle, by her former husband, Karl Ove Knausgaard. – Vanity Fair

A massive overhaul is happening at the top of Portland’s biggest artistic institutions. Six of Oregon’s major arts organizations—including NW Film Center, Portland Center Stage and Chamber Music Northwest—have recently undergone changes in leadership, or are about to. It’s not just generational turnover, either: In many cases, the white men in charge are being succeeded by women and people of color. – Willamette Week

“We were all trying to impress him. When it said fortissimo, we got a little out of hand. He said, ‘We all have different levels of fortissimo. Never take the sound past beautiful.’ The entire violin section applauded, which I don’t think I’d ever seen before.” – Dallas Morning News

Now that Baghdad is once more clambering back to its feet after ISIS’s territorial defeat, observers wonder: Can the school regain anything of its past glory or will it – and the city around it – continue their long, slow decay? – Smithsonian

More than 9,000 full-time school librarian positions were eliminated from 2009-2016, a 15% reduction, with teachers and their assistants having to add librarians’ former duties to their workloads. And in the relatively few places where positions are being added (e.g., Los Angeles), the nature of the work is changing quite a lot. – CityLab

“I wish I could have told him that his outburst about our outbursts (if gasps and laughs are outbursts) betrayed the DNA of theater itself. Unless he plans on buying out venues to watch plays alone, he’s much better off consuming entertainment in the privacy of his own home. (Seriously, stay away from movie theaters, sir!)” – Los Angeles Times

One of the biggest missteps was transitioning from a fall and winter schedule to a spring and summer schedule. Implemented in 2014, the transition was an attempt to address the opera’s already unstable earnings. It had the opposite effect. – Willamette Week

“What I’ve learned is: I love the danger. This thing I thought I hated all my life, that’s why I was doing it. If the show is at 8, and it’s 6, what will I be doing? Pacing. After 60 years, still pacing. I like that feeling.” – The New York Times

A special package on the great African-American playwright as she approaches her 88th birthday (Sept. 13), including a Q&A with Branden Jacobs-Jenkins, a feature on the undergraduate playwriting seminar she taught at Harvard in 1997 (a class which is said to have changed many of the students’ lives), and tributes from a dozen colleagues and former students, including Natalie Portman, Ishmael Reed, Michael Kahn, Robert O’Hara, and Aleshea Harris. – American Theatre

Higher education is in the middle of multiple, massive disruptions—and it isn’t clear that the leaders of the sector grasp the magnitude of the waves of change breaking on their ivy-covered gates. – The Atlantic

“Co-writer Peter Chiarelli, as an experienced feature scribe who broke out with 2009’s The Proposal, was to be paid a significantly higher fee than [Adele] Lim, a veteran TV writer who never had penned a feature until [director John M.] Chu hired her to work on the screenplay.” – The Hollywood Reporter

As editor at Universal Press Syndicate, beginning in 1974, “he signed up Calvin and Hobbes and Cul de Sac and For Better or For Worse. He discovered The Boondocks and Cathy. He guided Doonesbury and Fox Trot and The Far Side … [And he] was renowned within the industry for having his creators’ backs in times of controversy and then dealing with rankled newspaper editors and persistent media inquiries with a gentlemanly charm.” – The Washington Post

“The successful candidate will be tasked with overseeing the museum’s vast collection of indigenous American artifacts, including the Charles and Valerie Diker Collection of more than 116 objects hailing from 50 different Native American cultures from the 2nd century to the early 20th century,” and will oversee expanded programming on indigenous work. – Artnet

The flames aren’t raging only in Brazil: there have been major wildfires in lowland Bolivia for weeks, and they have damaged and destroyed ancient paintings that date back as for as 1500 BC in and around the town of Roboré in the Santa Cruz region. – Artnet

“These kinds of investigations historically have raised more questions than they have answered, leaving victims and the public in the dark about what behavior was documented in the inquiry, who might share some responsibility for wrongdoing and whether institutional problems that allowed misconduct to fester have been, or will be, rectified.” Exhibit A: New York City Ballet’s investigation of longtime head Peter Martins, which some former dancers suggest was a deliberate cover-up. – Los Angeles Times

“Seven transfers in one season puts [the Williamstown Theater Festival] at the top of the list of New York stage feeders; no single theater, let alone one that’s lit only 50 days a year, comes close. And yet the achievement does not mean that the festival has strayed as far from its original vision as that might suggest.” As Williamstown artistic director Mandy Greenfield tells Jesse Green (who once worked there himself), “We’re not chasing Broadway. We’re chasing a way of working.” – The New York Times

His grandparents were Iraqi Jews who fled Baghdad in 1941, and much of his work is inspired by their experiences. He’s most famous for his replica, placed on the fourth plinth in Trafalgar Square in 2018, of an Assyrian lamassu (a winged bull with a human head) that was destroyed by ISIS. – The Dallas Morning News

“Many of the artifacts that will be on display in the Humboldt Forum, a huge new museum under construction in a rebuilt Berlin palace, had for years been stored in less-than-ideal conditions. [A] report featured searing depictions of flooded storage rooms and depots choked with toxic dust.” – The New York Times 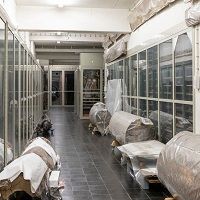