“France’s Prime Minister, Jean Castex, … said that the state has earmarked €2 billion ($2.36 billion) for the cultural sector in the wake of the coronavirus” as part of the government’s €100 billion economic recovery plan. “The newly installed Castex told France Inter radio that the state believes ‘culture is an economic activity’ and that ‘the cultural sector has greatly suffered from the crisis … more than others.'” – Deadline

Most nonfiction books are not fact checked; if they are, it is at the author’s expense. Publishers have said for years that it would be cost-prohibitive for them to provide fact checking for every nonfiction book; they tend to speak publicly about a book’s facts only if a book includes errors that lead to a public scandal and threaten their bottom line. Recent controversies over books containing factual errors by Jill Abramson, Naomi Wolf, and, further back, James Frey, come to mind. – Esquire

“John Cheever [once] told [an] audience he was ‘one of perhaps ten American writers who are known as the American Chekhov’. The description isn’t unhelpful because it’s used carelessly, but because Chekhov’s influence is so widespread: most short story writers are Chekhovians, whether they realise it or not.” Chris Power looks at the nearly ubiquitous features of modern short fiction in English which Chekhov more or less invented. – New Statesman

He told the audience at TED in 2006: “I believe our only hope for the future is to adopt a new concept of human ecology, one in which we start to reconstitute our conception of the richness of human capacity. Our education system has mined our minds in the way we strip-mined the earth for a particular commodity. We have to rethink the fundamental principles in which we are educating our children.” Understandably, this was much more enticing to the education profession than it was to government ministers, but it was based not on a single speech but Robinson’s whole career in academic education, which culminated in a professorship at Warwick University (1989-2001), before he became a senior adviser to the J Paul Getty Trust in Los Angeles. – The Guardian

What we think we know about the fight for women to get the legal right to vote is only a sliver of the history – and of our present. “There’s a lot of that still hanging in the balance. And so, I guess my answer is that I hate to think of it solely as a fight, but I think that the question of women’s equality is far from complete.” – NPR

A little over a year into my tenure at The Chronicle, I’d been initiated. For journalists, receiving an angry handwritten letter about usage from Quentin Kopp is a rite of passage, badge of honor and battle scar… His second letter to me, from December 2018, protested my use of “spaz” as a verb and any use whatsoever of “grok,” which he called “self-devised.” He concluded with a backhanded compliment: “But, don’t worry: Some quasi-literates may embrace you because you’re creative.” – San Francisco Chronicle

“Without widespread consumer awareness that most books are not fact checked, or about which imprints publish which books, there’s no real reason for publishers to care about fact checking. If it comes to light that a book contains major errors, it’s the author, not the publisher, whose reputation takes the hit. … Meanwhile, the stakes of not fact checking books only continue to get higher, as it’s become easier and easier to destroy a book’s credibility with a few clicks.” – Esquire

“Just over a year ago, San Diego Opera gathered 40 opera industry artists and cutting-edge technology designers from around the country for a first-of-its-kind Opera Hack weekend, with the goal of finding 21st century ways to modernize the 400-year-old art form. On Wednesday, the public finally got a look at the three ideas that earned the green light to move forward.” – The San Diego Union-Tribune

As many as 40 local television outlets and 200 Canadian radio stations could be forced to close in the next three years as the financial pressures faced by media companies intensify under the COVID-19 pandemic, suggests a new study from an industry advocacy group. – CBC

“The group allegedly circumvented copyright protections on nearly every movie released by major production studios, as well as television shows, and distributed them by way of a worldwide network of servers.” – The New York Times

For three years, 120 people are to receive 1,200 euros per month, and throughout the study period, they will be closely observed and frequently interviewed, as will the 1,380 members of the control group, who will receive no money. – Der Spiegel

TV needs the movies. But as the pandemic has forced the closure of countless movie theaters, new questions have surfaced about how much the movies will need TV. – Variety

The Richmond Ballet is foregoing its annual cashflow lifeline because the piece simply involves too many people to be done safely while the pandemic continues. But the company’s Studio Series will begin performances on Sept. 15, with maximum audience reduced from 250 to 70 and both viewers and dancers wearing masks. – Richmond Times-Dispatch

What if adaptation is not what is needed? What if we are asking the wrong questions? We are asking how to integrate our structures: staff, collections, exhibition schedules, board membership. What if the most important questions cannot be asked of others, but only of ourselves? – Hyperallergic

After thirty years at the Jewish Historical Museum in Amsterdam, Hetty Berg is taking the helm of an institution which is, thanks to history, both highly visible and loaded with baggage. The museum’s situation is even more fraught than usual now because of two thorny issues in Germany: the return of anti-Semitism and the BDS movement, a controversy over which cost Berg’s predecessor his job. – The New York Times

“The incident took place on December 28, when Shakeel Massey, a Spanish architecture student, punched Picasso’s 1944 painting Bust of a Woman numerous times. He held metal padlocks and wrapped his hand in a scarf to break through the protective glass, ripping the canvas before tearing it off the wall. Museum visitors looked on in shock as security guards detained him. Massey told the guards at the time that the act was a ‘performance.'” – Artnet

“The men, who have been charged with copyright infringement conspiracy, were accused of being members of the Sparks Group, a sophisticated piracy outfit spanning several continents … [that] ‘allegedly circumvented copyright protections on nearly every movie released by major production studios, as well as television shows.'” – The New York Times

When Canadian Opera Company general director Alexander Neef accepted the appointment to run the Opéra national de Paris from 2021-22, he was cutting short his Toronto contract by four years. But now he’s leaving for Paris right away, following a special request to COC from France’s Minister of Culture because of the situation in Paris. The COC’s board chair says Neef can run both companies from Paris until the board finds Neef’s successor. – Ludwig Van

“The 29-year-old Dutch author Marieke Lucas Rijneveld has become the youngest author ever to win the International Booker prize, taking the award for their ‘visceral and virtuosic’ debut novel, The Discomfort of Evening. … The £50,000 award for the best fiction translated into English … will be split equally with their translator, Michele Hutchison.” – The Guardian

The New Zealand Symphony, Royal New Zealand Ballet, and Auckland Philharmonia all say that key members of their companies, foreign nationals who were abroad when the COVID lockdown began, are now blocked by the government from entering the country and taking up their jobs, even if they willingly enter quarantine when they arrive. – Radio New Zealand

Mr. Perlman has been so ubiquitous that it is easy to take for granted his status as “the reigning virtuoso of the violin,” as his marketing materials put it. But with his 75th birthday arriving on Aug. 31, this may be a moment to reassess how that reign began and what has happened to the realm and all the superlatives. – The New York Times

Either Max Hollein and Daniel Weiss, the director and president of the Metropolitan Museum, were knowing participants in Yoko Ono’s mischievous potshot at their august institution, or they fell for her prank. – Lee Rosenbaum

If we cured all the world’s cancers, made the perfect smartphone and achieved the ideal form of representative government, but everyone was just as miserable after as they were before, then — did any of it matter? I think it is at least plausible that happiness, in some nebulous and hard-to-define but nonetheless real sense, is the most important thing in the universe. – Unherd

“Under the plan, Mayor Bill de Blasio promised to hold august institutions like the Metropolitan Museum of Art and Carnegie Hall accountable for hiring more members of historically marginalized and underrepresented groups and for making their boards of directors and other leadership ranks more inclusive. … But the Department of Cultural Affairs did not set numerical goals for what constituted progress, nor did it require that institutions provide baseline demographic statistics about their staffs.” – The New York Times

Saba Sahar, who is a senior police officer and an activist as well as a performer and producer/director, was shot in her car or her way to work. She was comatose for 20 hours but is now out of danger, said her husband. The Taliban has denied responsibility. – CBS News

“The top-level statistics are impressive: few other industries can boast sustained engagement with 98% of the population. The survey shows a significant rise in both the number of Australians who believe in the positive impacts of the arts, and the number who support it being publicly funded.” – The Guardian 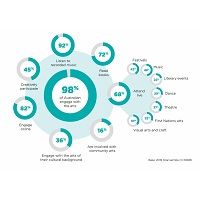