Granted, this isn’t truly a first – an opera singer and a violinist have done the same thing – but it’s for a very good reason.

The physical plant and climate control have been fixed up, the galleries have been reconfigured, and even the labels and wall text have been rethought.

“In every part of the country almost every weekend of the year, participants [learn first-hand] … how a soldier felt charging across grass into battle, down to what he ate at the campfire before forcing sleep to come while lying on a hard earthen floor.” Americans have been staging mock Civil War battles since (believe it or not) 1861. But in these politically and socially contentious times, the practice has become – well, somewhat fraught.

“The anonymous group … pledged to contribute up to $1 million to the Pittsfield museum if its board agrees to pause an auction of 40 works of art at Sotheby’s and to allow outside experts to provide a second opinion on the advisability of the controversial sale. Elizabeth McGraw, president of the museum’s board of trustees, said the offer falls short.”

“Previously thought to be a copy of Titian’s Venus and Adonis, experts at the Pushkin say it is the earliest surviving version of the work and now the Moscow museum wants to buy it through crowdfunding. It does not come cheap though – the painting is reportedly estimated to be worth between $10m-$20m.”

A former student of the Royal Winnipeg Ballet is filing a class-action lawsuit against the school and former instructor Bruce Monk, alleging Monk took nude photos and sold them online.

“Actors’ Equity has contracts with the Broadway League and various producers that constrict what can be recorded; these also make it clear who owns the footage, and it’s not the actors. They can retweet or share something posted by the show or a news outlet, but they typically can’t just go on their own for self-promotion purposes. In recent years, because of the growing importance of social media, actors have been grumbling that they need footage rights.”

“You come up with an image, phrase or sentence. Your head snaps back, and you say to yourself, Where did that come from?! I’m not talking about automatic writing, though that may be part of it. I mean the entire range of invisible forces that produce and affect the work. There are things the writer sees that the reader does not; things the reader sees that the writer does not; and things neither of us ever sees. These, the most entrancing of the lot, have a power of their own. Like the ghost of Jacob Marley, they lead to unimagined, sometimes frightful yet fruitful destinations.”

New ideas say it’s time for museums to embrace their exteriors, even out into the sidewalks or streets near them, and certainly their plazas. In one case, in London, “the idea behind the project was to see the museum not just as a cultural project, but as an urban one. It needs to be of the street.”

After University of California Riverside curators decided on the sci-fi theme, “they traveled to six countries and 11 American cities where they discovered a wide range of artworks, made mainly over the last 20 years, dealing with concerns including the politics of immigration and the dangers of military surveillance.”

Zephaniah is furious about – for instance – police surveillance of Black communities and the neglect of Grenfell Tower that led to the conflagration there. But he keeps a sense of humor: “When I talk to kids, I tell them about me growing up in gangs in Birmingham and how one day I got up and I went to London and I got involved in another gang and these were a real hard lot. All these kids are listening to me, and they go ‘Oh, you poor thing.’ And I go, ‘It was a gang of poets and painters,’ and they all laugh.”

The Salzburg Festival is so jammed with usually superb performances – six or eight every day of the six weeks it runs – that it’s hard to tell if anything has changed since a new artistic director took the helm. It’s still star-focused, and “The Vienna Philharmonic, a luxurious, willful house band, remains formidable.”

They met at Sundance Theater Lab 10 years ago, and though they’ve been in high-profile projects since, it wasn’t until 2016 that both Sterling K. Brown and Brian Tyree Henry broke out (which is why you might know them as Randall from “This Is Us” or Paper Boi from “Atlanta”). It’s been quite a ride.

Steward became a press officer for Richard Branson’s first foray into a record label in the 1970s, toured with Captain Beefheart, and worked with the Sex Pistols before she became fascinated with promoting both Latin music and what’s often called “world music.”

OK, this is just cool, especially if you’re mature enough to remember the launch of Voyager in 1977: “Using audio from the original tapes from the 1970s, a small team in California has put the Golden Record on vinyl for the first time. The set contains three LPs and a book of the photos that were encoded in the original record.”

Christopher Morgan’s second job as new artistic director of the beloved Dance Place: “zeroing in on how to make his studios available to local choreographers. He’d like to develop ‘space grants.'”

It’s science! “Netflix’s deluge of announcements is, for the most part, a welcomed high at a time that has taken us to new lows—often with no roadmap to find our way back. What’s not as obvious is the camouflaged science behind these announcements: Netflix’s long game.”

The Orpheum Theatre screened the film on August 11, the same day of the white supremacist gathering in Charlottesville – and commenters weren’t shy about connecting the two. The president of the Orpheum Theatre Group says the decision was made before Charlottesville, but: “As an organization whose stated mission is to ‘entertain, educate and enlighten the communities it serves,’ the Orpheum cannot show a film that is insensitive to a large segment of its local population.”

Athey says, “Being contextualized in art history for your asshole alone is a feat.” But he adds that if he hadn’t become a performance artist, he would have been a landscaper rescuing Los Angeles from its raggedy lawns. “I’d rather see a nice xeriscaped garden than some poor lawn. I love the garden. I would have a botanical garden — the botanical garden with all the special poison and psychedelic plants.”

The films, exploring police brutality against African Americans and a lot more, are mostly, but not entirely, documentaries. The director of the Ferguson documentary Whose Streets says, “It sometimes seems like all of our political actions are exhausted or have been compromised, and there’s a real pressing sense of the magnitude of the issues, with no clear path forward. … I think the way out of that is for us to look around, and in our backyard, and tackle problems in front of us, rather than being consumed in this massive huge story.”

People are going into debt up to $130,000, and Harvard’s ART is shutting down its MFA program for three years to re-evaluate before it gets shut down. “While a theatre education is valuable, it ought to be cheaper. In an industry currently in the throes of an ongoing conversation about equity, diversity, and inclusion, lowering the cost of education is one way to attract individuals from more socioeconomic backgrounds. Otherwise, according to O’Malley, ‘What’s going to happen is the only people who end up with MFAs are going to be rich kids.'”

The managing director of the Dutch National Ballet: “I was surprised by what he had been able to achieve with the patchiness of the training he had. … It’s a bit late for him to be a classical [ballet dancer] but that doesn’t mean he can’t be an artist, a dancer.”

365 days of movies for $9.95 a month? What? AMC is not OK with this, arguing that it will hurt movie theatres, movie studios, and even, perhaps, MoviePass itself. AMC: “From what we can tell, by definition and absent some other form of other compensation, MoviePass will be losing money on every subscriber seeing two movies or more in a month.” (But will subscribers, who are signing up in droves, care?)

Pay $20 a month, and get unlimited access to any offerings from a theatre? Um, OK. And if you
liked a play, you could see it more than once. (Maybe.) “Unlike a yearly subscription, which includes one showing of each play, a B-Flex pass could be used unlimited times – the incentive being that it gains value the more it’s used. B-Flex members do not have guaranteed seats, so its use would be contingent on availability.”

The country would like to figure out how to raise more private funds – and how to help arts organizations do the same.

Disney did what? Nye says “he was deprived of $9 million in profits from his show, ‘Bill Nye the Science Guy,’ which originally ran from 1993 to 1998 on PBS.” Disney, of course, says that’s malarkey. 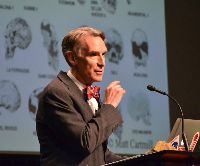