“Choreographers have tended to avoid Mozart’s music when making dances, for fear their steps will look trivial in comparison. … There is a lingering sense that dance, which involves physical bodies subject to the laws of gravity and propelled by muscle, will somehow drag down the music’s graceful architecture. … Ridiculous! says Mr. Morris.”

“James Smith had been patrolling the halls of the museum’s Egyptian art section for years when a museum technician noticed green marks on a pair of statues in his sector. The museum pinned blame for the 2014 incident on Smith, although video evidence exonerated him, he claims in a Manhattan Supreme Court lawsuit.”

“Much of the most exciting work in the arts today is by groups that connect creativity to such issues as immigration, homelessness, cultural diversity and other social justice causes, and that could make them a target. The arts have also enjoyed a long detente with political leaders in recent years, but it is a fragile one. The National Endowment for the Arts has seen its budget go up and down over the past eight years, but it hasn’t been formally reauthorized by Congress since 1993. A president who forced that issue could radically restructure the agency.”

A look at surviving evidence – not least the handprints in some cave paintings – suggests that we had been making some unwarranted assumptions.

“Forgive my generalisations and my bluntness, but there’s sometimes a deadness that comes when middle-class people run stuff. They get the content right, the ideas, the themes, the politics. But they haven’t a clue about how to embrace things.”

“Hidden behind a gender- and race-neutral job description is an expectation, grounded in a stereotype, of what a theatre leader needs to look like: white and male, because white and male leaders have been the long-standing majority of those in top positions.”

“Siloe, which specialises in making facsimiles of old manuscripts, has bought the rights to make 898 exact replicas of the Voynich – so faithful that every stain, hole, sewn-up tear in the parchment will be reproduced.”

Barbra Streisand: “And so what did I do? I called the head of Apple, Tim Cook, and he delightfully agreed to have Siri change the pronunciation of my name, finally, with the next update.”

“It could convert the giddy Olympian optimism of 2012 into wonders that will unfold over decades. It could be, to use the favourite adjective of eternally amazed sports broadcasters, incredible. But according to three venerable architects – Royal Academicians, still with fire in their bellies from their 1960s youths – it will not.”

“Parker seemed like a significant new presence in both the film and activism worlds. Unfortunately, the promise of both him and his movie appears now to be too good to be true.”

“The revelatory experience of candlelight and music in these indoor playhouses – the Blackfriars, the Whitefriars, the Fortune – meant that a theatre and music revolution was occurring, simultaneously with the growth of literacy.”

“The house on which the mural is painted is a few miles from GCHQ, home of the UK government’s surveillance operations. It appeared just months after Edward Snowden’s revelations of widespread phone-tapping by western governments.”

“Connie Crothers, a jazz pianist who carried the mantle of her famous mentor, Lennie Tristano, but built her own identity as an inventive composer, improviser and instructor, died on Aug. 13 in Manhattan. She was 75. … In all her work, from billowy solo piano to sharp ensemble playing, melody was her main concern.”

Who’s Telling Your Story (Storytellers Are Now Our Leaders)
He who tells the story sets the agenda. Looking for artistic leadership? Look for who is telling the most compelling stories… read more
A
JBlog: diacritical | Douglas McLennan

This Week: A look at online troll culture – were these awful people always among us?… Here’s who goes to choral concerts… A look inside the brain as it watches movies… Lin Manuel Miranda’s crusade … read more

“Nobody loves them, and rightly, for they are creatures of the night. Has anybody ever seen a dramatic critic in the daytime? I doubt it. They come out after dark, and we know how we … read more

Queering the canon – the new normal?

The Rifftides wrapup report on the Ystad Sweden Jazz Festival included a brief, enthusiastic comment about a performance by the Kathrine Windfeld Big Band of her piece “Aircraft.” This young Danish composer, arranger and pianist … read more

This Week: A look at online troll culture – were these awful people always among us?… Here’s who goes to choral concerts… A look inside the brain as it watches movies… Lin Manuel Miranda’s crusade against ticket bots.

This Week: An artist collective skewers Trump… How Florence’s Uffizi is dramatically addressing its problems… Our fetishizing of “authenticity” doesn’t ring true… So what if Google is changing the way you think… An inspiring comeback after medical calamity by one of America’s best musicians.

“The immediate takeaway from last night’s awards is that like last year, a slate of works pushed onto the ballot by a coordinated campaign has considerable trouble actually succeeding, and where it does, it’s where slated works are considered universally popular.”

“Overseeing the Uffizi, with its world-class holdings and public-sector staffing, is a bit like running the Metropolitan Museum of Art and the Metropolitan Transportation Authority at the same time. … As [new director Eike Schmidt] fights to manage the crowds, generate more revenue and improve the museum experience – including its chaotic ticketing system and long lines – will he continue to marshal popular support and prevail against a morass of bureaucratic restraints, vested interests and political intrigue?” 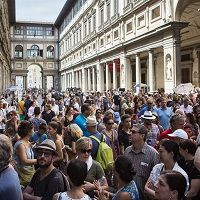