“Ben Barson and Giselxanath Rodriguez, part of the Afro Yaqui Music colective, talk about artivism — what it means, what it can look like — in relation to building a jazz opera with various communities around the world.” – HowlRound

“Iterations of the Harlem Cultural Festival were held in 1967 and 1968, but the 1969 events were the apex. Atop the rocks and down in the grassy field, they were showing up to watch a roll call of black popular music luminaries move through tight sets covering beloved repertoires. … And the crowds responded — looking on reverentially, dancing with one another around the edges of the park.” – The New York Times

Arti Prashar: “We operate in a climate where we have been asked to grow and grow, following a business model that just doesn’t work for the arts – of seeking bigger turnover and bigger and wider audiences. We need a mixed economy – always have, always will. I hear of many venues and organisations running huge deficits – how are they going to plug those holes?” – Arts Professional

“Theaters across the country may offer various accommodations, including captioning devices and sign interpretation. But the Kennedy Center is one of the few to add another layer to its live sign-language interpretations by hiring theater-savvy directors who are deaf — that’s the crucial part — to oversee them.” Sarah Kaufman visits a rehearsal to see the artistry and ingenuity at work, especially in tackling the tricky problem of repeated song lyrics. – The Washington Post

So why aren’t there more realistic, or semi-realistic, or, dare it be suggested, hopeful films about climate change? Because, several directors said, it is hard to find financing for movies that risk being real downers and challenge audiences to change their ways. Because mass extinction is soul-crushing and people seek out entertainment to escape. – The New York Times

“There is anecdotal evidence that gender affects every step of the publishing process. In 2015, Catherine Nichols submitted proposals for a novel to agents and publishers under both her own name and a “homme de plume.” Her male alter ego, George, received far more interest: His manuscript was requested 17 times, compared with two for hers. The tone of the responses was also different.” – The Atlantic

“He would reject work, but praise the writing. His form rejections included a note: “It happens that I am both the editor of the Blue Moon and also the head of a critical revision business. If you have your manuscript revised I, as editor of the Blue Moon, shall then be glad to consider your story for publication in the magazine.” More than 30 writers agreed. Jessup took their money, and kept their stories.” – Literary Hub

The project reached its crescendo, transitioning from theoretical to actual, last month when the Port of San Diego agreed to lease a 3.68-acre site on Embarcadero Marina Park to the symphony for up to 50 years. The agreement was the last regulatory action needed for the symphony’s long-planned outdoor facility, which will serve as the permanent home of the Bayside Summer Nights concert series. – San Diego Union-Tribune

“What mobile AR adds is the ability to changefocus by actively moving around a simulated object in real space. The technology wants you to do that. So it may just not be the ideal way to experience anything that requires any degree of sustained focus, like a poem or a performance.” – Artnet

From one year to the next, he manipulated the Comédie-Française, selecting plays and scheduling performances on or around his birthday (which fell, conveniently, on a major Catholic feast) to give himself (born into minor Corsican nobility) the aura of a divinely appointed monarch. – History Today

Linguistic decline is the cultural equivalent of the boy who cried wolf, except the wolf never turns up. Perhaps this is why, even though the idea that language is going to the dogs is widespread, nothing much has been done to mitigate it: it’s a powerful intuition, but the evidence of its effects has simply never materialised. That is because it is unscientific nonsense. – The Guardian

In the enduringly expensive world of the multi-day music jamboree – where power bills alone can reach £100,000 for a 10,000-capacity event – ticket refunds are just one problem. – The Guardian

A big part of the 1969 festival’s legend is that no one involved had any idea how big it was going to get and how many people would show up, and the organizers were utterly unprepared. “Woodstock was saved at every step of the way by decidedly non-groovy regular people” — from Max Yasgur, the law-and-order Republican who rented his farm to the festival at the last minute, to the citizens of Bethel, NY who hard-boiled hundreds of thousands of eggs and sent canned goods when organizers ran out of food on the second day. – The Washington Post

“The New Colossus” (“Give me your tired, your poor, …”) was not mainstream American sentiment when Emma Lazarus wrote it in 1883 (one year after the Immigrant Act and the Chinese Exclusion Act). Indeed, it was somewhat radical, and she was inspired by the work she did with the despised refugees who were flooding the U.S. in her day (Jews from the Russian Empire). Slate history maven Rebecca Onion talks with Lazarus biographer Esther Schor about the poem and how its reception has changed over the decades. – Slate

Carolina Miranda: “If ever there were an urgent moment for the various culture industries — film studios, theater companies, art museums and TV production companies — to act on issues of diversity and inclusion, that moment is now. And not because diversity is some feel-good thing that makes for a nice talking point during Hispanic Heritage Month, but because rendering an entire segment of the population invisible makes the cultural arena complicit in a marginalization that is entering increasingly dangerous” — literally dangerous — “territory.” – Los Angeles Times

The one art form that interests Mr. Trump is the art of the deal, though the book about it published under his byline was ghostwritten by someone else. Its only reference to music is hostile: “I punched my music teacher,” Mr. Trump recalls, “because I didn’t think he knew anything about music and I almost got expelled.” – Baltimore Sun

“It took seeing the museum’s powerful survey of Bill Viola’s rich, deep and deeply moving video work to fully understand what is so hollow and dispiriting about the main galleries of the collection, which hold an invaluable collection of Impressionist and post-Impressionist art assembled in the first half of the previous century.” – Washington Post

“Today, the forces of entertainment marketing, social media and grievance culture are increasingly colliding, with the casualty being the movies themselves. Why wait to actually see “The Irishman,” Martin Scorsese’s long-gestating project about Jimmy Hoffa and the mob, when you can start fact-checking it months before it opens?” – Washington Post

Everyone had an opinion about what Kanye did. The VMAs were viewed by 11 million people that year, though the crush of coverage after the fact was more comparable to that of a Super Bowl, which typically gets 10 times as many viewers. – Washington Post

“Nothing but the world outside the human one.” Alastair Macaulay offers an analysis (if that’s the right word for a Cunningham piece) of the 1958 work Summerspace. – The New York Times

In Europe, there were no immediate cancellations of the 78-year-old Domingo’s performances and even some words of support for the star. Opera world officials noted that no charges had been brought against Domingo and no formal judicial investigations were underway that might provide legal underpinning to cancel any contractual obligations.The stark differences in the levels of urgency in the responses underline the differences in the footing of the #MeToo movement on both sides of the Atlantic. – Yahoo! (AP) 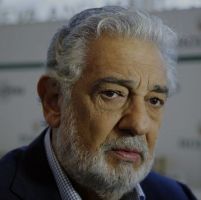