Amy Steiger: “Not only do students recognize misogynist and colonialist language in acting textbooks — as well as an insistence on the gender binary that sometimes makes them wonder if there is room for them in theatre — they glean ideas about how theatre artists understand their own work and how students are expected to learn. Students’ role in the drama of the classroom is key to shaping and defining their position in American culture and the kind of work they produce within it. Have American actors ever been represented in textbooks as intellectuals, dissenters, or agents of change?” – HowlRound

Feinstein has been unique in advocating for this music not only onstage and via albums but also through his books, PBS specials and NPR broadcasts, plus his Great American Songbook Foundation and eponymous cabarets and, of late, his work as principal pops conductor for the Pasadena Symphony. – Chicago Tribune

Says one who was wounded in the 2016 shooting, “They’re talking about a theme-park environment where you buy memorabilia.” Of the club’s owner, who runs a foundation (which pays her a six-figure salary) to build and operate the proposed museum, the mother of one victim said, “These [young survivors] can’t afford their co-pays, they’re not getting PTSD therapy, and meanwhile you’re profiting and you want an admission-charging, souvenir-selling, tour-bus-visiting hate museum.” – Orlando Sentinel

His movies earned 21 Oscar nominations over his four-decade career, and he garnered one himself for Best Picture for Costa-Gavras’s 1982 film Missing. But he’s best remembered for breaking the blacklist by hiring Dalton Trumbo to write the screenplay for Spartacus — and crediting him for it by name. – The Washington Post

“The Royal Exchange is one of Manchester’s best known theatres, the venue resembling a lunar landing craft located inside The Great Hall on St Ann’s Square. … The Den is a lightweight, 180-seat portable auditorium designed to be built and dismantled … by members of each host community who will become its ushers, its box office, technical team and audience.” – BBC

Alex Ross: “A master of late-Romantic opulence, Korngold shaped the sonic texture of Golden Age Hollywood. To say that his work sounds like movie music is an elementary fallacy, a confusion of cause and effect.” – The New Yorker

“In a video recorded during the airport protest Friday, hundreds of demonstrators can be seen participating in a sit-down and heard singing and clapping to an a cappella version of ‘Do You Hear the People Sing?’ from the 1987 blockbuster … Les Misérables.” – The Washington Post

From 2013 to 2017, the number of orchestras in China leaped from 32 to 82. In 2019, the Shanghai Symphony Orchestra celebrated its 140th season, and the orchestra, along with its conductor, was recently signed to the prestigious Deutsche Grammophon label for a multi-year deal. – Ludwig Van

The eponymous avians in Ashton’s The Two Pigeons are meant to be living symbols of the relationship between the two human leads, called the Young Man and the Young Girl. Reporter Jennifer Lu talks with Emma Hills, who trains the pigeons who have been doing the show for a decade, about how she teaches them and what mischief they occasionally get up to. – Pointe Magazine

“[Science fiction] isn’t a new genre in Indian cinema, but it has nothing like the profile it has in the West. … While Hollywood has a long tradition of making more naturalistic films about space travel – from 2001: A Space Odyssey, to Gravity and First Man – it’s only now, with the enormous strides in India’s own space exploration, that such films are beginning to resonate with the public.” – The Guardian

Joshua Kosman: “Here’s my request for today to creators of contemporary opera: How would it be if we had a new work that did not turn on a female character sacrificing herself to redeem a man? … The Bay Area’s operatic stages this month have been weirdly rife with women eager to throw themselves overboard for a man’s sake, and honestly my patience is starting to wear a little thin.” – San Francisco Chronicle

Of those 70,000, 12,000 signed up in the first week alone. “Cardholders at the Brooklyn, New York and Queens public libraries can gain free admission through the program at participating cultural institutions that include museums, performance venues, botanical gardens and historical societies.” – The New York Times

Reflecting on the contretemps over the Life of Washington murals at a San Francisco high school as well as the decision by one small Northern California museum to sell much of its art and another to end an exhibition program, Charles Desmarais considers “what I think of as a kind of cultural duty of care — with the avoidance of negligence or harm to works of art maintained by an organization for the public good.” – San Francisco Chronicle

The company, which will “retain outside counsel” to look into the accusations, said in a statement that Domingo “has been a dynamic creative force in the life of LA Opera and the artistic culture of Los Angeles for more than three decades. Nevertheless, we are committed to doing everything we can to foster a professional and collaborative environment where all our employees and artists feel equally comfortable, valued and respected.” – Los Angeles Times

Just hours after an AP story featured allegations of sexual harassment against the opera superstar, and shortly after the Philadelphia Orchestra disinvited him from its season-opening gala next month, San Francisco Opera cancelled an Oct. 6 concert headlined by Domingo. (Meanwhile, the Salzburg Festival is standing by him.) – San Francisco Classical Voice

Justin Davidson: “The Berkshires, the bucolic swath of Western Massachusetts where urban refugees can get their weekend dose of gardens, waterfalls, and even the occasional moose sighting, enjoys the cultural life of a major city, spread out over an area half again as vast as Houston.” – New York Magazine

“Printed news started out as, essentially, collections of letters to the editor. Newspapers did not routinely employ full-time reporters until the 19th century. At that point, the older meaning of ‘journalist’ – someone who keeps a journal – disappeared, and the word began to refer solely to news-gatherers. Similarly, interviews and in-person reporting did not become common until the 19th century.” – Aeon

My own views on this contretemps are conflicted. By all accounts I’ve seen by art professionals, this is a powerful work, intended by the Russian-American artist to be seen as a critique of the historic cruelty suffered by African-Americans and Native Americans. In cases like this, I give myself what I call the Holocaust Test. – Lee Rosenbaum

“It’s all about awareness and action. The artist’s job is to raise consciousness and cut through the complacency. I asked playwrights to meditate on the theme of, ‘Wake up—act now!’ We’re creating awareness, and stimulating action.” – Pacific Standard

“The Philadelphia Orchestra Association has withdrawn its invitation to Plácido Domingo to appear as part of its Opening Night concert on September 18, 2019. We are committed to providing a safe, supportive, respectful, and appropriate environment for the Orchestra and staff, for collaborating artists and composers, and for our audiences and communities.” – Philadelphia Inquirer

“For decades, Placido Domingo, one of the most celebrated and powerful men in opera, has tried to pressure women into sexual relationships by dangling jobs and then sometimes punishing the women professionally when they refused his advances, numerous accusers told The Associated Press.” – Yahoo! (AP) 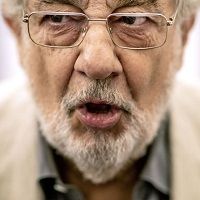