“At the height of its popularity in the late 1980s, circulation reached 1.2 million copies per week. Headlines like ‘Bigfoot Kept Lumberjack as Love Slave’ ruled its covers. A team of dedicated journalists filled its pages with satirical fiction. If fact happened to stumble its way inside, it would be adjusted to fit the paper’s mission statement.” Here, from the people who worked there, is the story of everyone’s real favorite supermarket tabloid. – Mental Floss

He didn’t start the community radio movement (that was Lew Hill of Pacifica), but, as one radio historian wrote, “if Lew Hill fathered the movement, Lorenzo Milam reared it.” He founded independent, community-supported stations in Seattle (KRAB-FM), St. Louis, San Francisco, Portland, Dallas, and other cities, and he even wrote a guide to starting up a station, titling it Sex and Broadcasting. A polio survivor, he spent later life as a writer (The Cripple Liberation Front Marching Band Blues; Cripzen: A Manual for Survival) and published two literary journals. – The New York Times

“Some days, I think this glut of time is an offering. More often, however, it’s a force-feeding. To have ideas, you need constraints, which for us were the auditions, rehearsals and performances dribbled across our calendars. Now that those boundaries have evaporated, I have begun to realize how much I depended on them and how much my relationship with music was predicated on feeling present with others, both in the audience and onstage. If a sonata falls in the forest and nobody hears it, did it make a sound?” – Washington Post

“J.J. Yore … presided over big increases in revenue and membership since the Marketplace co-creator arrived at the public radio station in 2014, but the end of his tenure began with a public debate over the station’s ability to retain Black journalists and blossomed into a full-on staff revolt that followed an investigation into one editor and revelations about how WAMU treated allegations of harassment by former reporter Martin Di Caro.” – Washingtonian

This game-changing decision could result in a complete overhaul of not only who owns theater chains in the near and long-term future, but how, when and where consumers will enjoy feature film content. – Forbes

“Maybe you’ve learned the seasons in a new way. Perhaps, in some way, you are a visitor in your city, state, land.” – The New York Times

In the year of the 500th anniversary of Raphel’s death, a 3-D reconstruction of his face, using a plaster mask of his skull, provides what may be “concrete proof that the skeleton exhumed from the Pantheon in 1833 belonged to Raffaello Sanzio and [may open] the paths towards possible future molecular studies aimed at validating this identity.” – The Guardian (UK)

Soria was the president of the Hollywood Foreign Press Association, and former editor of the Italian news weekly L’Espresso. He began his second term as president of the press association in 2019. – St. Louis Post-Dispatch (AP)

Paint what you see – including virtual realities that might just be based on paintings. – CBC

The perfect holiday film? “First broadcast on ITV, at 9pm Christmas Eve 1989, it haunted all who watched it, thanks in part to Wise’s tense, economical direction, and one of the greatest jump-scares in the history of horror. ‘[It created] a genuine physical reaction,’ wrote Nancy Banks-Smith in the Guardian, ‘as if one layer of your skin had shifted over another.'” – The Guardian (UK)

Not that it would be easy to fix the issues with Twilight, but author Stephenie Meyer gives it a try with her newest book. So … how did that work out? Uh: “Meyer seems to think that accountability means addressing how toxic your behavior is and then continuing to do it anyway, but it’s fine now because you know it’s wrong.” – Slate

Artist Ngarralja Tommy May, a Wangkajunga-Walmajarri artist, has won the major prize at the (streamed) National Aboriginal and Torres Strait Islander art awards. Said another winner (for painting), “I love the ability to make sure that people like myself feel included in the visual national identity of Australia.” – The Guardian (UK)

The Condé Nast food magazine’s missteps around race and representation continue. “The departures came a day after three journalists of color said they would no longer participate in the magazine’s popular video series, citing inequitable pay.” – The New York Times

The tourist, on a trip to celebrate his 50th birthday, was visiting an art museum in northern Italy last week when he posed with the statue of a reclining Pauline Bonaparte. Her husband had commissioned the seminude sculpture by the Italian artist Antonio Canova in the early 19th century. It is known as Pauline Bonaparte as Venus Victrix. What happened next might be attributable to the reckless exuberance that big birthdays often bring. – The New York Times

Over the past decade, and at almost every step — from the design competition to the groundbreaking in 2017 — the project was dogged by controversy, subject to congressional hearings and, at one point, effectively defunded by the government. – Washington Post 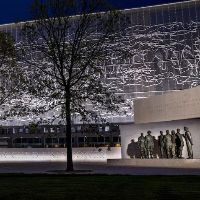