“Every August for the past five years, Beach Sessions Dance Series has been an exciting fixture on the sands of Rockaway Beach in Queens. The festival brings contemporary-dance luminaries to share their work through free, outdoor site-specific performances, all while raising environmental awareness through beach cleanups and other collaborative programming. But as coronavirus began to decimate the plans of other summertime dance festivals, it might have seemed inevitable that Beach Sessions would also be forced to take the year off. Enter TikTok.” – Dance Magazine

In 1761, at roughly age 7, the girl who would become Phillis Wheatley was taken from Africa to Boston and sold to the wife of a local merchant who educated her. Within a dozen years, she had published a book of verse in London and become perhaps the most famous Black person in the British Empire as well as a symbol for anti-slavery campaigners. Until recently, though, we knew her life story only through a tendentious memoir, written well after her death, by a woman who claimed to be a relative of her mistress. – The New Yorker

Keenan Scott II explains: “We tend to be rewarded for depicting the harshest realities of the Black experience while ignoring its beauty. In art, our trauma is fetishized and romanticized while our joy is dismissed. The end result is a society that views the Black experience as a dreary monotone.” – American Theatre

Alyssa Cole, author of books about the Civil War and contemporary life, decided to write a thriller. One of the issues she has faced: “There are people who find the idea of Black people in love unbelievable, of Black people solving crime unbelievable, who seem to think people from marginalized groups are nonplayer characters who just wait around for something to happen to them.” – BuzzFeed

It seems like the entire edifice is teetering. If you can’t pay musicians, you can’t get live music. Culture, while a major economic sector, will likely be one of the last to restart after the shutdown. – Van

Born in Calais, France, Fabrice Fourmanoir, 63, might once have been dismissed as a crackpot, a wannabe who would never be welcomed into the sophisticated enclave of art scholarship. But since January he’s gained some standing in this forbidding world, after playing a leading role in a blush-inducing admission by the Getty Museum in Los Angeles that a Gauguin sculpture, purchased in 2002 for a reported $3 million to $5 million, is not actually by Gauguin. – Washington Post

Alexis Soloski: “As an undergraduate 20 years ago, I had majored in theater and back then, our training was exclusively and incontrovertibly face to face. Good acting happened in the moment, in the room, in the space between bodies and breath, action and intention. You couldn’t teach that online! … Or could you? For two humbling and sometimes humiliating weeks, I tried.” – The New York Times

For a group of scholars, scientists and musicians, Hagia Sophia’s rededication as a Muslim place of worship threatens to cloak a less tangible treasure: its sound. Bissera Pentcheva, an art historian at Stanford University and an expert in the burgeoning field of acoustic archaeology, has spent the past decade studying the building’s extravagantly reverberant acoustics to reconstruct the sonic world of Byzantine cathedral music. – The New York Times

When I pop around and listen to public radio streams from around the country, they almost universally sound like they did before the pandemic started. Same with the programs themselves. Things have changed topically, but not formatically. The audience dynamics have completely changed, so why hasn’t the stations’ sound? – Current

Jason Farago: “Tokyo 2020, its name unchanged, will now take place in July 2021 if it takes place at all. Yet all around the Japanese capital is the legacy of another Olympics: the 1964 Summer Games, which crowned Tokyo’s 20-year transformation from a firebombed ruin to an ultramodern megalopolis.” – The New York Times

The video-sharing social media app said in a blog post Wednesday that it will give creators in the U.S. over $1 billion in the next three years, and more than double that globally. – CNBC

Wesley Morris: “What would an American version be? Court, theater, a hearing, a telethon, therapy, TV, church, Ken Burns, Anna Deavere Smith? Each perhaps — and more. Who would make it? I don’t know…. The production, however, is merely the second hurdle to clear. The first would be convincing executives that it’s worth doing in the first place. Here’s what to say about that: The entertainment industry itself has more than a century of harm to atone for and ameliorate. Any company that believes the solution to ‘systemic racism’ is The Help shouldn’t mind a surrender of its airwaves.” – The New York Times

No, Dostoevsky’s novel is only the second-most popular title among inmates there; Bulgakov’s The Master and Margarita is in the top spot, with Dumas’s The Count of Monte Cristo at number three. The data was released by Russia’s Federal Penitentiary Service as part of a nationwide government program to encourage reading called “Books Are Your Friends.” – The Moscow Times

In a statement that also announced the cancellation of all remaining 2020 performances (including The Nutcracker), the company revealed that Michael Pastreich is departing after 14 months. He’s the third executive director to resign since Julie Kent succeeded Septime Webre as artistic director in 2016. But a pattern of Washington Ballet CEOs quickly coming and going was established quite some time ago, writes Sarah Kaufman. – The Washington Post

Barrington Stage Company in the Berkshires was all set to go with a production of playwright David Cale’s one-man play Harry Clarke — the union had given the go-ahead, and the theater had had seats removed and the bathrooms and air conditioning system redesigned to meet COVID safety guidelines. But the state of Massachusetts has refused to waive its ongoing ban on indoor performance. The show will go on, however — in a tent. – The New York Times

“Venues newly allowed to reopen to customers include movie theaters, auditoriums, stadiums and performing arts centers. Those represent the last of the business restrictions not rolled back two months ago. However, they must keep capacity at 50 percent or 250 people, whichever is less.” – The Post and Courier (Charleston) 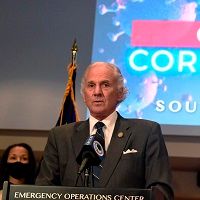