“In the last 20 years of his life, Wilder (who died in 2002) managed the unlikely feat of being both revered and ignored. … There came a point after his final two movies, Fedora (1978) and Buddy Buddy (1981), when Hollywood simply stopped financing his work. … He went every day to his office in Beverly Hills to work on projects that would never be made.”

“As prices for art skyrocketed, Sotheby’s and other firms have become shadow banks, making millions of dollars of legal loans outside the regulated financial system and raising concerns that such financing could facilitate money laundering.”

The graphic work dating from 1520 was thought to have been lost during the Second World War … [It] shows a majestic view of the Virgin Mary with Baby Jesus, protected by an angel, and belongs to a 15-part series of [Madonna-and-Child] depictions the artist created at different stages of his career.”

Well, it was rational, systematic, and taxonomically orderly. If only that were the way humans actually think.

Dalí’s Adolescence (1941) and de Lempicka’s La Musicienne were stolen at gunpoint from a small private museum in the Netherlands in 2009. Art detective Arthur Brand estimates that the works changed hands about ten times before a criminal gang, realizing they were stolen and couldn’t be fenced, contacted him.

“The contract of outgoing director Agnes Husslein-Arco will not be renewed due to violations of internal codes of conduct and compliance standards. … [She] was found to have charged inadmissible expenses to the museum, as well as hiring museum employees for private services.”

“The magic of the Internet — the recession of the material world in favor of a world of ideas — is not pure delight. It seems we are missing something very worthwhile and identity-forming from our predigital lives. Is it a handwritten letter? Is it an analog phone call? Is it a quality of celluloid film, a multivolume encyclopedia, or a leather-bound datebook? Is it a way of thinking or being or even falling in love?”

“This marks an 18% turnover growth for China, made more impressive by the fact that the market seems to have contracted in the West, with London down 30% and New York down 49%.”

“The best moments are when theatre defies all expectations. Such as a thrilling Brecht revival when you didn’t think you liked Brecht all that much, or a Chekhov production that makes you rethink a play you secretly thought was a wee bit dull. It’s particularly the case with material that has been flogged to death.”

“Watching somebody type on a computer is about as interesting, aesthetically and dramatically, as watching cows eat grass. Though at least grass-eating cows would be a change from routine, unlike computers, which many of us type on all day. This seems especially ridiculous when it’s Hollywood stars doing the typing.”

“He envisions a society where each person can express himself or herself in a manner that enriches everyone – in the way that an orchestra harnesses the gifts of its members or a potluck becomes more fun when many people bring their signature dish.”

“Art was very much in the picture, because artists were hard hit by the epidemic, but also because art is (or can be) strategically useful. It can broadcast or insinuate messages into the larger culture, embody complex truths, absorb fear, preserve memory.”

“While many fans blame the show’s new network for the firings, a statement tweeted from the verified “Sesame Street” account implied that HBO had nothing to do with the decision as day-to-day production is still overseen by Sesame Workshop.”

“We learned today that the aria ‘Nessum dorma’ performed by Luciano Pavarotti is being used (on) the Donald Trump campaign soundtrack,” wrote Nicoletta Mantovani, his widow, in a letter cosigned by Pavarotti’s three daughters. “We remind you that the values of brotherhood and solidarity that Luciano Pavarotti upheld throughout his artistic career are incompatible with the world vision of the candidate Donald Trump.”

“Naysayers resent what they see as the patronizing cultural overlay, arguing that the community will be radically transformed, housing prices will go up, the poorest in the neighborhood will be displaced, etc. They brush aside the hope that the community will be revitalized, becoming more diverse, safer and, if done right, experience an improvement in its quality of life. In an urban design and planning sense, a cultural blanket is a very warm way to generate progress of all kinds.”

The study looked at wage theft and precariousness of employment. Arts and entertainment workers topped the list of workers in all industries who are least protected.

Hall sees one positive aspect to his Alzheimer’s. It’s caused him to assemble the archive that now surrounds him at home. The word ‘legend’ comes from the Latin for ‘to read,’ but it also means ‘to select, to gather together.’ Hall has been gathering this rich chronology, piecing together the meanings and connections in his life and career. “So that’s what I have been doing,” he says. “I live in a world where I am constantly with my past.”

A day after news media picked up on social media criticism that only five of 15 cast members for a first concert reading of the work-in-progress, a stage adaptation of the hit 1998 animated film about Moses, were nonwhite, Dreamworks and the producing theater called off the event with no explanation.

“The ROH and RSC, with the British Museum and National Portrait Gallery, have renewed their partnerships with the oil and gas giant for a further five years as part of a £7.5 million deal. The move has drawn fervent criticism from campaigners, who earlier this year set their sights on major cultural institutions that continue to receive sponsorship from fossil fuel companies, following the termination of deals with Tate and the Edinburgh International Festival.”

“[His] life took him from segregated Georgia, where he grew up in poverty as the son of an alcoholic father, to Harvard Law School during the social upheaval of the 1960s. Uninspired by the legal professional, he became a writer … He published no book for 20 years after the announcement of his Pulitzer for his 1977 collection, Elbow Room.”

Community is natural. But we’re losing it.

We talk about community a lot. The word gets thrown around so much that it begins to lose its meaning. It begins to sound like just another empty word … like sustainability … read more

To me community means family. It means we’re in this together no matter the outcome. Community is unity, love, compassion. Community is dancing with your tribe just because your happy. … read more

A practice of commitment

I’ve been noticing a trend that many of my friends and colleagues will, after having children, attend church or participate other memberships and meetings so their developing family has … read more

He’s Scott Altman, currently ED of Ballet West. “The executive director position has been vacant since Paul Kaine left the company in April 2008. Soon after, Victoria Morgan added the CEO role to her artistic responsibilities. In the course of one year, Morgan, working with staff and board, eliminated an $800,000 deficit. Since then, the company’s annual ticket revenue has grown more than 70 percent, while attendance has climbed nearly 30 percent. The company’s endowment, just $1 million when Morgan became CEO, is now $11 million.”

He was, after Sibelius, “the most famous and popular of Finnish composers … In an output running to over 150 compositions, with dozens of orchestral pieces, Rautavaara’s eight symphonies are one of his important contributions to 20th-century music.” The Seventh, titled Angel of Light, “marked a new breakthrough for Rautavaara to a newer, wider audience, his music no longer the preserve of the critics and cognoscenti.” 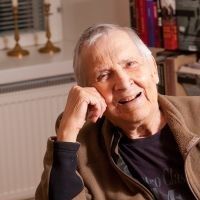