“The £110m Factory arts centre is set to be built on the site of the old Granada Studios in Manchester city centre … But now it needs approval for a second time after designers realised the glazed exterior would play havoc with the centre’s acoustics. They have also discovered that the theatre design was too complex and the orchestra pit too small.” The architects are OMA, Rem Koolhaas’s firm.

“In March of 1983, a listener would have clicked on the radio hoping to hear an update about Reagan’s plans for what the media was calling ‘Star Wars.’ Instead she would have heard the whoosh of tires, the voice of a hospital intern in North Carolina trying to figure out how to care about all his patients, the sound of a man taking swigs of whiskey as he drives to Florida to see his mom one last time before she dies, and the voice of Scott Carrier describing the light bounce of the red rocks of Arizona.”

It might not even be an export. It might only be possible within Germany: “Of the current top five albums on the German charts, two are schlager records. To put it into perspective, that would be like if the number three and four albums on the US Billboard Hot 100 were Christian rock about cats.”

“For authors whose books were released in the thick of the political storm, to booksellers watching readers flock to dystopian works, the Trump administration has succeeded in influencing our consideration of books—not necessarily for better or for worse, but in ways that demonstrate how much we need words to survive and provide solace for troubling times ahead.”

They don’t know – and that’s the problem. For much of the state-owned airline’s history, it was one of a very few serious buyers of living Indian artists’ work – in effect, a national art patron. Now that much of that artwork is worth many thousands of dollars (or more) a piece, there’s no proper inventory of what Air India bought over the years or where it’s supposed to be – and some of it has been turning up in the private market.

Evidently believing that Schutz hasn’t been punished enough for having shown her painting of the murdered Emmett Till at the Whitney Biennial, a group of activists wrote in an open letter, “The institution will be participating in condoning the coopting of Black pain and showing the art world and beyond that people can co-opt sacred imagery rooted in oppression and face little consequence … Please pull the show. This is not about censorship. This is about institutional accountability.”

“After Berlin’s Hamburger Bahnhof and London’s Tate Modern, the trend for converting industrial buildings into contemporary art spaces looks set to continue in the northern Italian city of Turin. The Officine Grandi Riparazioni (OGR), an H-shaped complex of 19th-century railway repair workshops covering an area of 35,000 sq. m, is due to reopen as a privately funded ‘arts and innovation centre’ on 30 September with a trio of site-specific artists’ commissions and two weeks of free concerts.”

“The working class thing is an attitude. It’s a burning, it’s a feeling inside,” Cartwright says. “That’s what came in the ’50s. It wasn’t just that they were from a particular area or a particular economic strata. They carried with them a certain fire. That’s what we’re building in the classes. We’re not just classes – we’re a bit of a movement really and we’re a quiet revolution. And we’re coming. If you won’t let us through the doors, we’re coming over the walls and through the stalls. We’re coming in. It’s time. And anyone out there who feels the same as I do, join us, because it’s time for change in theatre. It really is time for change.”

“The latest employment statistics from the Department for Digital, Culture, Media and Sport found that almost two million people worked in the creative industries in 2016, a 5% increase on the previous year. Across the UK, employment grew by 1.2% year on year. The overall number of creative industries employees has grown from 1.5 million in 2011 to 1.9 million in 2016, now making up 6% of all UK jobs.”

“He was sometimes a producer, more often a distributor and exhibitor. He decided to buy Mr. Lynch’s Eraserhead (1977) after seeing only half of it and made it a cult hit. Before that, he invented the phenomenon of the midnight movie, with El Topo (1970), selling out the Elgin for six months, followed by Pink Flamingos … Now, at 82, [Ben] Barenholtz has directed his first dramatic film. ‘I’ll never be Kubrick,’ he said, smiling. ‘But I wasn’t afraid either.'”

Although schools like Juilliard and Bennington College have made degrees acceptable for modern dancers for decades, the competitive ballet world (which often follows a philosophy of “the younger the better”) tends to discourage higher education.

Derek Thompson: “Altogether, the numbers paint a clear picture: The higher-education market is not bursting, like a popped soap bubble; but it is leaking, like a pierced balloon. What’s going on? The explanation is a little bit of weak demand, a little bit of over-supply, a big crackdown on for-profit colleges, and, perhaps, a subtle shift in culture.”

“The public opening of the MDI, originally scheduled for Oct. 7, has been postponed until sometime next year. Three planned exhibitions for the space are also being shuffled. Menil Collection director Rebecca Rabinow said the organization’s earlier move-in plan was ‘probably a little too aggressive.'”

“Now Mr. Moore, this willfully disheveled, 63-year-old hybrid of Noam Chomsky and P. T. Barnum, expects theatergoers to pay Broadway ticket prices to watch him in a one-man show, The Terms of My Surrender. After his previous documentaries, books and television shows, does he have anything left to say, and does he really believe it will make a difference?” Dave Itzkoff goes to a rehearsal to find out.

“More than 72 years after the liberation of Auschwitz, the first traveling exhibition about the Nazi death camp will begin a journey later this year to 14 cities across Europe and North America, taking heartbreaking artifacts to multitudes who have never seen such horror up close.”

“The alleged victim, Daniel Olsen Chen, 62, a Norwegian national living and working in Japan, is a former violinist who maintained a making and repairing workshop in Nagoya. He posted a video of the destruction on his YouTube channel, AV Daniel Violin, and has claimed that in total 54 instruments and 70 bows were damaged, including his own Amati, the value of which he places around 50m yen ($450,000).” (includes video)

“Foray was also the voice behind Looney Tunes’ Witch Hazel, Nell from Dudley Do-Right, Granny in the Tweety and Sylvester cartoons and Cindy Lou Who in Chuck Jones’ How the Grinch Stole Christmas, among hundreds of others.”

“[He] doesn’t exactly need another job. He is chairman of the Hispanic Society of America; a professor at New York University’s Institute of Fine Arts; an honorary trustee of the Prado Museum; and a host of the PBS TV program NYC-ARTS. But now Mr. de Montebello has decided to add yet one more, becoming a director of Acquavella Galleries, effective immediately, where he will focus on the curation of special exhibitions and the development of publications.”

Patinkin will spend three weeks at the end of the summer as Pierre in Natasha, Pierre & The Great Comet of 1812. “This marks Patinkin’s first role in a Broadway musical since 2000’s The Wild Party, and his first time on Broadway since his 2011-12 season concert An Evening With Patti LuPone and Mandy Patinkin.”

“The story of Italian marble is the story of difficult motion: violent, geological, haunted by failure and ruin and lost fortunes, marred by severed fingers, crushed dreams, crushed men. Rarely has a material so inclined to stay put been wrenched so insistently out of place and carried so far from its source.”

“Italy’s top administrative court has also unblocked the international selection process for a new director to oversee the ancient amphitheatre and its surrounding monuments, including the Roman Forum, Palatine Hill and Domus Aurea. The decisions of 24 July overturn a challenge by the mayor of Rome through the Lazio regional administrative tribunal (TAR) on 7 June.”

“Veselka” cucumber conundrum soup
You can tell the temperature by the firefly rate of thorax blinking, which can be hypnotic, like the gleam of this cucumber seed in fluorescent kitchen light. Those seeds, covered in slime, scoot like baby roaches onto counter or floor when you run a spoon down the center of your split green sausage to scoop them out. … read more

This is Reading — Artists Make Magic

In mid-July, I traveled to Pennsylvania to see a show. It was straight-up MAGIC. I can’t stop thinking about it. … read more

“New music is a culture that tends to romanticize risk, and I think we ought to push back on that romanticizing. For all its aesthetic innovation, new music remains a job for many people.” Perhaps the same could be said of new American opera. Debates over its future highlight a complex web of expectations concerning not only the importance of radical artistic vision but also the commercial realities and conventional operatic norms of larger institutions that cannot afford to fail in the same way that smaller organizations might.

“With almost as much gusto as the talkers on cable news channels, the theater world is chewing over the bombastic image and pronouncements of President Trump, albeit with even less concern about the appearance of neutrality. It’s fair to say that among the lively arts, the theater has staked a claim most quickly and aggressively as a conduit for critiques of an administration that the vast majority of artists look upon as a threat.”

Lauren Gunderson recently topped the annual list of American Theatre magazine’s ranking of the country’s most-produced playwrights. (She was second only to August Wilson, who is deceased. Shakespeare receives so many productions every year he is no longer included on the list). Her placement there was remarkable for a number of reasons. She’s one of only a handful of women to make the list, and at 35, she is relatively young to appear there.  But Gunderson took the theater world by surprise primarily because she has never had a major production in New York.

“Nonprofits with large endowments are collecting more than twice as much money as they are spending on grants, facilities, and administrative and other costs, a new data analysis of 1,600 organizations by The Chronicle shows.”

“The first International Biennial of Contemporary Art of South America (BienalSur) launches this September across 30 cities … Although its main hub is in Buenos Aires, the show extends beyond Argentina – to Santiago, Rio de Janeiro, Havana, Paris, Berlin and Tokyo, among other cities.” 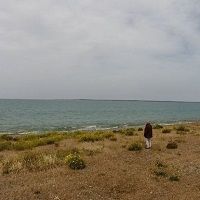