For many professors, the sudden transition was a struggle. For Malan, it was the natural extension of a decade’s worth of experimentation. “Our team is fortunate to have been doing this blend of education for quite some time,” he told me recently. “For us, it was very straightforward.” – The New Yorker

Saida Grundy: “While the crafters of anti-racist reading lists are mostly making an earnest effort to educate people, literature and dialogue cannot supplant restorative social policies and laws, organizational change, and structural redress. When offered in lieu of actionable policies regarding equity, consciousness raising can actually undermine Black progress by presenting increased knowledge as the balm for centuries of abuse.” – The Atlantic

A child star who was once dubbed “the Scottish Shirley Temple,” she “grew up to become one of the most dynamic jazz artists of her generation, writing lyrics and electrifying audiences with her daring, high-speed singing as part of Lambert, Hendricks and Ross.” Later in life, she had a brief movie career and then returned to singing; in between, she led “an often-troubled personal life, which included heroin addiction and a tumultuous relationship with taboo-breaking comedian Lenny Bruce.” – The Washington Post

So far, at least, this isn’t as bad as many people had feared. A presidential spokesman, talking about plans to turn the historic Istanbul monument back into a mosque, said that Christian images that Muslim worshipers would face during prayers (i.e., toward Mecca) would be hidden at those times and uncovered when Hagia Sophia is open to visitors. He added that mosaics and paintings in other parts of the building would pose no problem. – Artnet

The abrupt restructuring of daily working life for tens of millions due to the COVID-19 pandemic has also dramatised just how different ‘flexible’ work is in different contexts: liberating for some, imprisoning for others. – Aeon

Given social-distancing protocols that prohibit physical gatherings, theatre makers have responded creatively to the COVID-19 pandemic by turning to online, digital and lo-fi or “non-embodied” modes of performance that use radio and phone. This change in how to perform theatre has required a reconsideration of longstanding ideas of what it means to be a theatre audience member: How has access to theatre changed? What etiquette is expected? How have ideas of privacy and intimacy shifted? – The Conversation

If cancellation is removal from a position of prominence on the basis of an ideological crime, it might appear that there is a case to be made for canceling Aristotle. He has much prominence: Thousands of years after his death, his ethical works continue to be taught as part of the basic philosophy curriculum offered in colleges and universities around the world. – The New York Times

True to her outspoken nature, Nathalie Bondil, the summarily sacked 13-year director of the Montreal Museum of Fine Arts, is not going quietly. Having gotten a taste of her feistiness and grit during a meeting we had three years ago in New York, I’m not surprised. – Lee Rosenbaum

Reasons for synchronising release dates globally, such as minimising piracy and coordinating marketing, hardly seem like priorities given present circumstances. The US is still the largest single cinema market, but in 2018 it made up just 27% of the global box office. The longer the “America-first” principle remains, the worse things get for everyone: cinemas and related businesses, Hollywood itself and moviegoers – whose expectations for Tenet are now so sky-high, the movie will have to singlehandedly cure the coronavirus to live up to the hype. – The Guardian

The growth in nonfiction stands in contrast to fiction. Despite the publication of highly anticipated novels such as Margaret Atwood’s The Testaments, sales fell to £582m in 2019, down 5.6% when compared with 2015. – The Guardian

“Kusama’s enormous popularity stems not just from the transformative experience of her photogenic art or its digital reach, but from her compelling personal narrative as well [as her] cultural brand as Pop Art’s eccentric auntie. … But it is also the result of a supporting structure that brings together [psychiatric] hospital, studio, fabricators, and galleries to surround her like an exoskeleton.” – ARTnews

“Williams is a courtly, soft-voiced, inveterately self-effacing man of eighty-eight. He is well aware of the extraordinary worldwide impact of his “Star Wars” music—not to mention his scores for “Jaws,” “Close Encounters of the Third Kind,” “E.T.,” the “Indiana Jones” movies, the “Harry Potter” movies, the “Jurassic Park” movies, and dozens of other blockbusters—but he makes no extravagant claims for his music, even if he allows that some of it could be considered “quite good.” – The New Yorker

The plan just announced by artistic director Christine Cox is for “a new series launching Sept. 10 celebrating the company’s 15th anniversary with world premieres by 15 choreographers. She sees the season in terms of a subscription-based film festival with nine shorts and six features. The shorts will be dance films presented on a new virtual platform hosted on the company’s website called BalletX Beyond. The features are intended to be performed live in the spring or summer, depending on public health concerns, but they, too, may be turned into films, if necessary.” – The Philadelphia Inquirer

“The decline of cable isn’t a new story, but what has started to take hold is a change in narrative inside the industry. Rather than try to prop up what they all know to be a decaying linear business, cable executives are instead focusing on their still-healthy intellectual properties and the brands behind them. Some of those cable brands are even aiming to carve out a space in the streaming world.” – Variety

“Carriageworks has a clear path towards recovery after creditors voted unopposed on Tuesday for a proposal to rescue the arts company with the support of philanthropists and the New South Wales government, but not everyone is happy with the deal.” The problem: many of those creditors are small arts organizations and individual artists, who may get only about a third of the fees owed them. – The Guardian

For decades, the P in NPR stood for “public,” as in publicly supported, noncommercial radio and digital news. Yet with its growing dependence on corporate advertising, NPR has found itself on equally troubled footing as its for-profit competitors, all of them reliant on the same pool of advertising dollars that have dried up during the coronavirus pandemic. – Washington Post 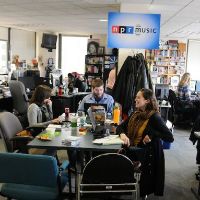