“A foreign correspondent who wrote books about terrorism and international intrigue” — he worked at The Washington Post and Newsweek for many years and at his death was world news editor of The Daily Beast — “but who was perhaps best known for a revealing memoir about his tortured relationship with his father, the renowned poet and novelist James Dickey.” – The Washington Post

Created jointly by the National Book Foundation, the Academy of American Poets, and the Community of Literary Magazines and Presses with $3.5 million from the Mellon Foundation, the Literary Arts Emergency Fund will make one-time grants of $5,000 to $50,000. – Yahoo! (AP)

If there’s one lesson to be learned from the pandemic, it’s the benefits of flexibility. In a matter of months, we’ve converted parking spaces into cafés, restaurants into food pantries, closets into broadcast centers, parks into hospitals, hotels into homeless shelters, porches into concert stages, and laptops into schools. Surely, in the coming years, we can figure out how to recycle empty storefronts for needs we didn’t know we had. – New York Magazine

Trained at the Paris Opera Ballet, she became an international star in the title role of Carmen by her husband, choreographer Roland Petit (for whom she continued to dance for decades, sometimes with the likes of Nureyev and Baryshnikov as partners). She went to Hollywood and starred alongside Bing Crosby in Anything Goes. Back in Paris, where she and Petit were the toast of high society, she became queen of the city’s music hall scene, decked out in resplendent feathers for her signature tune, a lewd little number called “Mon Truc en plumes.” – The Washington Post

Written by two former employees and one current staff member and signed by almost 70 others, the petition alleges sexual and racial harassment at the federally funded institution and calls for broad changes to make it a more diverse, equitable and transparent institution. – Washington Post

“We keep hearing that this is a post-truth era, that feelings beat facts, people no longer care what’s true, and we’re heading for ruin. Opponents of Brexit and Donald Trump not only found those victories intolerable, but many refused to believe them to be legitimate, instead supposing that lies had swayed a docile population. This idea of a gullible, pliable populace is, of course, nothing new. Voltaire said, ‘those who can make you believe absurdities can make you commit atrocities’. But no, says Mercier, Voltaire had it backwards: ‘It is wanting to commit atrocities that makes you believe absurdities’.” – Times Literary Supplement

According to the publisher’s own history, Elliott founded the magazine during a summer holiday from Keele University, where he was studying. “He produced the first edition on the kitchen table in his mother’s house in Kensington with £70, part of a recent 21st birthday present from his aunt.” It began its global expansion in 1995 with the launch of Time Out New York and the process continued in the following decade. – The Guardian

It may be closed on its 65th anniversary, but that’s the only appropriate choice. “For me and many Southern California residents, Disneyland is more than a theme park; it is where I go to write, to read, to reset. It represents something between a living pop-art museum and an emotional retreat. Mostly it’s an invitation to play, and when I play I’m calm. Yet I would not be calm if I were inside Disneyland right now.” – Los Angeles Times

Opening with socially distanced audiences on August 1st? Not likely, say theatres. “For most theatres it will not be economically viable to reopen with 30%-40% audience required under social distancing. … We now need to progress as quickly as possible to an announcement on the all-important stage five. Without this, most theatres cannot reopen viably.” – The Guardian (UK)

It’s hard to settle on a bop when there’s no one to bop with and no place to dance to that bop. “This level of turnover has not been seen since 1990, the year before Nielsen SoundScan revolutionized sales tracking, and may reflect a few structural factors.” – The Atlantic

When you have to ask yourself, “Am I actually dying to see this movie?” it might be too early for the theatres to reopen. “Infections are still going up in many states, and there is no federal plan in place to halt that spread. Simple acts to contain the coronavirus, like wearing a mask or staying at home, have now become so hopelessly politicized that it’s all but impossible to imagine our country flattening the curve by Aug. 12.” – The New York Times

Bloodletting was a normal treatment at the time, but not the best practice for someone who probably had pneumonia, or so a new study says. – The Guardian (UK)

Museums will not open on Monday, or anytime soon, says Governor Cuomo. “We’re not going to have any indoor activity in malls or cultural institutions. … We’ll continue to monitor that situation, and when the facts change, we will let you know.” The worry? Viral spread by tourists from the South and West of the U.S., where cases are increasing at a massive rate. – The New York Times

Tucci began her career in Italy in the 1950s and went on to international acclaim, including in the 1960s at the Metropolitan Opera. “An unaffected and subtly compelling actress, she was best known for her interpretations of the spinto repertory, like her rendition of the title role of Verdi’s Aida, which demanded both lyric soprano lightness and the vocal heft to lift soaring phrases over an orchestra.” – The New York Times 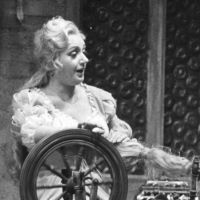