The Stuttgart Ballet is performing a program of solos, duos, a trio, and a socially distanced adaptation of Maurice Béjart’s Bolero for 249 people in the theatre and 1,000 cars at a drive-in. The Parc de la Villette in Paris is making its stage available as a large-scale studio/workshop for various companies, with audience members (with limited, timed tickets) able to watch. In Prague last month, they managed to put on a complete contemporary dance festival. Sanjoy Roy reports. – The Guardian

London: “Emptied out by coronavirus during lockdown, the City was the perfect place for socially distanced, government-mandated walks. And beneath its streets are the bodies of innumerable plague victims. One in particular haunts me. Holbein died in London, almost certainly of plague, in 1543. The long shadow of bubonic plague permeates his art, in its danse macabre of corpses and skeletons. It seemed appropriate to seek out this master of pestilence in a time of pandemic.” – The Guardian (UK)

OK, we just miss it. A lot. “It’s a different absence than the loss of indoor theater, partly because of how fondly we cherish summer traditions. But as the director Anne Bogart said in a phone interview, outdoor performance by its nature involves a fuller embrace of life, and of accidents.” – The New York Times

A new streaming documentary does a lot more than set jazz dance into context – it asks the ballet and dance communities to restructure what they consider “foundational.” – Dance Magazine

Eat your heart out, Anish Kapoor. At least sixteen species of deep-sea creatures “have evolved a different and devilishly clever way of going ultra-black with incredible efficiency: One species the researchers found absorbs 99.956 percent of the light that hits it, making it nearly as black as … Vantablack, the famous human-made material that absorbs almost all the light you shine at it.” – Wired

Truly embarrassing themselves again, major studios released 118 films in 2019 and, well, they all got low grades from GLAAD. “Lionsgate, Paramount Pictures, United Artists Releasing and Universal Pictures were marked as ‘insufficient’ by GLAAD, while Sony Pictures Entertainment and Walt Disney Studios received ‘poor’ grades and STX Films was slapped with a ‘failing’ grade as it had no LGBTQ representation in its 2019 film slate.” But they all failed at trans representation. – The Hollywood Reporter

Although the museum calls Hiroshi Sugimoto’s design a “revitalization” of the sculpture garden, its critics feel it is much more than that. They are especially concerned with the proposed changes to the core of the garden, the portion with the reflecting pool. Under the current plan, the pool would be replaced with one more than double its size with a stage at its center. – The New York Times

“[There’s] a new class of augmented reality (AR) technologies like the Magic Leap, a headset that allows users to superimpose digital media atop their seen reality, innovatively combining recorded dance with real space. Director and founder of the MAP Design Lab Melissa Painter recently collaborated with Pilobolus to produce a bonkers AR choreography called YouDanceWeDance. This project, which began its life on the Magic Leap, allows viewers to use their smartphones to observe (from any angle, and anywhere) Pilobolus dancers moving according to selectable emotional themes.” – Dance Magazine

“The systemic racism that runs like rot through the structures of the classical music world exists somewhere between broad statistical data and intimate personal disclosure. And right now, in what seems like a promising turn, a range of responses to it — individual, artistic and institutional — feels, at long last, audible.” – Washington Post

“You may have heard of the Blue Mustang, the infamous giant blue equine sculpture outside Denver International Airport. But the Blue Mustang is only one of many conspiracy theories circling the DIA’s artwork. When Leo Tanguma painted a series of murals for the Denver International Airport, he had no idea that they would become a lightning rod for conspiracy theories and controversy over the murals’ perceived meaning; despite his attempts to explain the true meaning behind the murals, the firestorm of negative conjecture continues to roll on.” – Atlas Obscura via YouTube

You might argue that furloughs are inevitable, given the inability of theaters to perform indoors in front of more than 50 people under current city and state guidelines. But it’s not the furloughs that have been so surprising: It’s the permanent layoffs, indicating that the boards of non-profit organizations just don’t see any imminent return to normal operations. Time and time again, I’ve heard that the job losses were necessary to protect the future of the institution. – Chicago Tribune

James Bennett, II: “First, we looked at the technology and market realizations that set crossover up for a late 1980s-90s boom. Then we explored how that bubble burst. But crossover today isn’t dead — it’s just assumed a new form, as it’s done throughout its long history. Now, it’s less opera-pop and more chamber covers of popular music. And if recent pre-COVID concerts are any indicator, concerts centered around popular film and television scores might be selling out for years to come. At least if you’re Hans Zimmer.” – WQXR (New York City)

Documentarian Anthony Baxter writes about how his 2016 film You’ve Been Trumped Too — which shows how the seizure of land for and the construction of Trump’s Scottish golf resort affected nearby residents, including one farm family whose water supply has been cut off ever since — was suppressed by legal threats from the Trump Organization and the exorbitant premiums demanded by companies for providing errors-and-omissions insurance. – The Guardian

“The government examined the first draft of a law … which legislates that specific items known to have been looted must be returned permanently to their places of origin within one year. … The objects the law would see deaccessioned from French collections include 26 objects taken from the royal palace of Abomey in 1892, which are currently held at the Musée du Quai Branly-Jacques Chirac.” (There is also a historically important sword that would be returned to Senegal.) – Artnet

“In place of what most theatergoers have come to regard as a ‘season,’ the New York Theatre Workshop — the birthplace of Rent [and Slave Play], among other landmarks — is offering what you might call a 2020-21 un-season. A programmatic embodiment of the possible, fueled by the percolating brains of more than two dozen playwrights, directors, actors and performance artists.” Peter Marks explains how it will work. – The Washington Post

“The job losses are expected to affect all areas of the organisation, which comprises venues including the Hayward Gallery and Royal Festival Hall, as well as being home to eight orchestras, the National Poetry Library and the Arts Council Collection. The [Centre] has furloughed the majority of its 600 employees, and in May predicted it could face a £5.1m deficit for the 2020-21 financial year.” – The Guardian

“Whatever we do right now,” Gustavo Dudamel said, “has to have an impact not only in the time we are living but also to help us achieve what we can do in the next years. That’s why we were not rushing to do a thousand things, to do this or that. We went to the heart of what transformations we need to make and what we think can work.” – Los Angeles Times

After posting my contrarian defense on Tuesday of Gary Garrels, I ducked, anticipating a pile-on of invective. Instead, I got confirmation of what I’ve always known: I’ve got a classy readership — intelligent, civil and reasonable, even while contesting my contentious views. – Lee Rosenbaum

Anthony Tommasini: “The status quo is not working. If things are to change, ensembles must be able to take proactive steps to address the appalling racial imbalance that remains in their ranks. Blind auditions are no longer tenable.” – The New York Times

“As a general insurrection erupts against America’s foundational inequities, and a British national identity propped up by fantasies of empire finally splinters, it isn’t enough to lament the ‘authoritarian populism’ of Trump and Johnson, to blame ‘identity politics’ and the ‘intolerant left’, or to claim moral superiority over China, Russia and Iran. The early winners of modern history now seem to be its biggest losers, with their delegitimised political systems, grotesquely distorted economies and shattered social contracts.” – London Review of Books 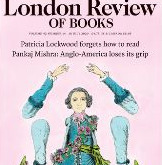