These newly published observations cement the human-ness of Snowball’s dancing. His initial headbangs and foot-lifts are movements that parrots naturally make while walking or courting. But his newer set aren’t based on any standard, innate behaviors. He came up with them himself, and he uses them for different kinds of music. “This is what we would genuinely refer to as dance, both in the scientific community and in the dance profession,” says Nicola Clayton of the University of Cambridge, who studies bird cognition. “It’s amazing.” – The Atlantic

“Traditional ballroom dancing enacts a caricature of socially prescribed gender roles. The male partner is the leader; the female partner, the follower. The male partner’s movements are meant to be sharp and decisive, while the female dancer is meant to be flowy and expressive. … Same-gender ballroom dancing challenges these norms while also challenging the dancers themselves, who often learn to both lead and follow.” – The Washington Post

“The [Victoria and Albert Museum LGBTQ] tour’s burgeoning popularity is part of a more general ‘queering’ of British museums that is gathering pace. Institutions across the UK are teasing out stories of same-sex desire and gender nonconformity in artefacts that have, until now, been left untold, or actively suppressed.” – The Guardian

“At the Manchester International Festival, … Bruguera revealed plans to establish an investigative journalism initiative that will award prizes and grants and offer workshops for Cuban writers at the Institute of Artivism Hannah Arendt, which she founded in Havana in 2015. The announcement comes amid a crackdown on freedom of expression in the country.” – Artforum

While Mitchell’s associations with jazz had been criticised in the mainstream rock press by writers who found her experimental, category-defying streak somewhat conceited, it was Mingus himself who instigated the project. Dying from ALS, Mingus was fixed on the idea of a final project, an epitaph of sorts, but he knew he needed a guiding light to see it through to fruition. – Jazz Journal

“According to insiders who spoke … on the condition of anonymity, there are plenty of reasons big-name celebrities are increasingly reluctant to join forces with awards shows. Some of these issues, like the time commitment a gig like this requires, have always been factors. Others — like the hazard of getting mercilessly roasted on Twitter over a bit gone wrong — are a bit newer.” – Vanity Fair

In the past, work was recognized for its colonizing power, expanding to fill and dominate time itself such that there might exist no clear line between work hours and nonwork hours. Our current condition is worse. The Interface, leveraging boredom, makes us all into unpaid workers for the advertisers who support those apparently cost-free platforms. We ought to recall that there is no such thing as a free transaction. In this species of transaction, you pay with your individuality, freedom, and happiness. – The Walrus

“It’s actually very hard to keep the audience engaged in the development of a story. The struggle is figuring out how literal I can be, and how much I can use the abstract aesthetic of dance to enhance an emotion as opposed to just tell the story. … Storytelling is where ballet started, and then contemporary dance took over and it was all about movement and space and music. I want to revive it, and not feel it has to be an old-fashioned form.” – Pointe Magazine

Karl Ove Knausgård devoted several autobiographical volumes to everyday failures in My Struggle, and since then there has been a deluge of ‘fail-lit’, both in fiction and non-fiction. Could failure be the new literary success? And if so, doesn’t that mean it’s not really failure at all? – BBC

“I was told that some people felt it was not an appropriate programming for a concert in an area that voted overwhelmingly for Brexit.” The complainant then promised to call for other people to stay away. – The Guardian

Thirty-five exhibitions and more than 180 art commissions produced in almost a decade at the previous space were a “testing ground”, Mehli Fereli says, for an institution that aims to foster “contemporary artistic production across all disciplines, from music to dance, theatre to sonic arts, film to literature”. – The Art Newspaper

If arts institutions had to survive on locals’ loyalty alone, MoMA wouldn’t be adding yet another new wing, the Metropolitan Museum of Art wouldn’t be open seven days a week, theaters would go dark, and opera would cease to exist. That cute antiques store on your block that you hope won’t get gentrified out of existence? Chances are a quarter of its clientele lives abroad. – New York Magazine

“She supported [seven children] as a translator, writer for radio and television, and college professor, carving out at least 10 minutes each day to write. While changing diapers and preparing dinners, she scribbled lines of poetry on notebooks, napkins and the backs of envelopes, ultimately filling the drawers of her desk with completed poems.” Twenty-five years after publishing her first book of poems, she published a second, and went on to be “recognized as one of the most distinctive poets of her generation.” – The Washington Post

“Amid growing pressure for cultural institutions to cut ties with the controversial oil company, … [British Museum director Hartwig] Fischer said today that BP’s support for the museum over the years has helped ‘create unique learning opportunities’, such as the forthcoming exhibition Troy, Myth and Reality (21 November-8 March 2020). ‘This sort of support is vital to [the museum’s] mission,’ he said.” – The Art Newspaper

“Masazumi Chaya, the associate artistic director of Alvin Ailey American Dance Theater since 1991, will retire on Jan. 5, 2020, after the company’s annual City Center season. But he’ll still be involved with the organization: After he steps down, Mr. Chaya, 72, will be in charge of a licensing project that will assist in the restaging of Ailey’s works.” – The New York Times

The 70-year-old Austrian — formerly music director of the Houston Symphony (2001-13), Calgary Philharmonic (1995-2003), and the major orchestras of Bordeaux, San Sebastián, and Salzburg — succeeds Lan Shui, who stepped down in January after 22 years. – The Straits Times (Singapore) 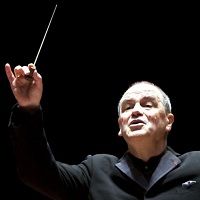