“Avatar: The Last Airbender … first ran from 2005 to 2008 on Nickelodeon, and swiftly made a name for itself as a politically resonant, emotionally sophisticated work — one with a sprawling but meticulously plotted mythos that destined the show for cult-classic status. Last summer, after Game of Thrones flubbed its finale, fans and critics held up Avatar as a counterexample: a fantasy series that knew what it wanted to be from the beginning.” – The New Yorker

A native of Bermuda who settled in the UK after World War II, he performed — “against the odds,” he once said — to perform in 40 feature films as well as numerous TV movies and series. “His big screen roles ranged from James Bond’s secret service minder Pinder in Thunderball (1965) to the dictatorial president in Sydney Pollack’s thriller The Interpreter (2005).” – The Guardian

FDR’s Works Progress Administration was the closest Washington had come to emulating European arts subsidies. At the same time, the New Deal made a devil’s pact with race – and the WPA was no exception. – Joseph Horowitz

“Hamilton’s premiere on such an accessible platform marks a potential for genuine change and improvement in the future. I know that nothing will ever replace the feeling of being in a real-life theater, sharing a room with strangers experiencing the same extraordinary thrills. But if this is the best, most inclusive way to introduce more people to theater, then I am all for it.” – CNET

Boris Johnson said arts and culture were the soul of the nation. “They make our country great and are the lynchpin of our world-beating and fast-growing creative industries,” the prime minister said. – The Guardian

After months of waffling – and infuriating the arts sectors in the UK – the Tory government finally came through. One playwright: “If this package is as ambitious as it looks, then conversations within our sector will now need to turn to what our recovery might look like in terms of protecting any gains made in recent years over inclusion, representation and diversity, and how this support can reach who need it most, particularly outside of London.” – The Guardian (UK)

That is, Netflix, Sam Mendes, Steven Spielberg, and a series of small grants. “The fund will provide short-term relief to hundreds of theater workers and freelancers across the U.K., and particularly those from underrepresented groups, which are disproportionately affected by the crisis.” – Variety

The actor’s leg was amputated, and he was placed in a medically induced coma for weeks, in an effort to stop the virus. One review of Cordero’s performance in A Bronx Tale: “The terrific Mr. Cordero radiates a cool charisma that mixes a surface geniality with shrugging ruthlessness.” – The New York Times

Why? Money. Also, Tom Cruise had a chat with the minister. “We want the industry to bounce back and exempting small numbers of essential cast and crew from quarantine is part of our continued commitment to getting cameras rolling safely again.” – Variety

Well, it’s an idea, anyway, and far – far – from the worst idea Boris Johnson has proposed. “The devil, though, is in the detail, a territory that Boris Johnson finds notoriously hard to navigate.” – The Guardian (UK) 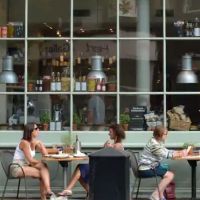