Blockbuster, it turns out, ended up doing a very good job of fighting back against Netflix and might well have won, but it made some fundamental mistakes that ended up dooming its future. – Recode

Reading Ibraham X. Kendi’s Stamped from the Beginning or How to Be an Anti-Racist, or maybe cuddling up to Asha Bandele and Patrisse Cullors’ When They Call You a Terrorist, may be great for catching up on what should have been in our educations already. But “fiction gives you a window into both lives you know and recognize and ones you don’t. It helps you to put yourself in the shoes of those characters, even when you have a different perspective when it comes to race, gender or sexual identity.” – Time

It has become a truism to say the coronavirus pandemic will change everything about higher education. But few discuss who should shape this change. The faculty? The student body? The public? Or the business-executive trustees that Thorstein Veblen believed were destroying the essential nature of academe? – Chronicle of Higher Education

Back in the late 1960s, Charlie Perrière was a struggling young musician in Bangui, capital of the Central African Republic, and about to leave for Congo when he was personally summoned by President Jean-Bédel Bokassa — the one who later crowned himself Emperor (just like his hero, Napoleon) and fed prisoners to crocodiles and lions. Bokassa told Perrière not to emigrate and subsequently drafted him to lead the president’s personal orchestra. Not only did Perrière survive, he became famous enough that, more than 40 years later, young rebels pillaging the capital spared his house. – Narratively

Hank Stuever: “As soon as one Karen flames out across the Internet, another apparently more unhinged Karen rises in her place. … Amid a culturally fractious and largely failed attempt to quell a killer pandemic, paired with a stirring surge in support of civil rights and police reform, there’s a strange sort of solace that comes from watching these Karen … videos spring up like summer dandelions across the regulation-green lawn of the fragile, white American psyche.” – The Washington Post

“Scholars in the work of surrealist Frida Kahlo have searched for more than six decades for The Wounded Table, a 1940 oil painting illuminating her pain over the breakup of her marriage to muralist Diego Rivera that hasn’t been seen since an exhibition in Poland. And the historians strongly reject the idea that the mystery of its whereabouts has been solved, as claimed by a Spanish art dealer who says the painting is now sitting in a London warehouse awaiting a buyer willing to spend more than 40 million euros.” – Yahoo! (AP)

The prison library program will give each of the 1,000 prisons the same 500-book collection selected by the project’s leaders. The collections, which Dr. Alexander called “freedom libraries,” are to include a broad variety of nonfiction, fiction, poetry, science, social thought and more. – The New York Times

While it is certainly not inevitable that children lose their sense of wonder as they grow up, and while adults are in principle as capable of experiencing wonder as children, it is to be expected that, as the world becomes more and more familiar to children as they age, they will experience wonder less readily. – Psyche

India has banned video-sharing social network TikTok and messaging platform WeChat along with 57 other Chinese developed apps over national security and privacy concerns, as tensions between the two countries continue to rise. – The Hollywood Reporter

Amazingly, not only has the group continued the girls’ education online, it has used the constraints to its advantage by bringing in guest artists for master classes and increasing one-on-one instruction. At a time when many of the girls are deeply moved, not to mention upset by recent events, the continuation of study has doubtless been a lifeline. – San Francisco Classical Voice

Belarus Free Theatre — outlawed by its homeland’s dictatorship, forced to rehearse and perform in secret, and with its artistic directors living in asylum abroad — has years of experience using secure high-tech platforms to work together remotely and livestream its plays. The company has been unusually productive in the months since the pandemic arrived, and its newest production is already making news. – HowlRound

“For decades, the Met’s programming has been associated with a kind of elegant classicism. The Breuer, it seemed, would allow the museum to strike a new balance between grandeur and something more outré. … But the Met didn’t follow the Whitney’s lead in that respect — most exhibitions were dark and relatively traditional in their presentation. … [But] since the opening of the Met Breuer, the Met has reoriented its modern and contemporary strategy with far better results.” – ARTnews

“Ava DuVernay, Stanley Nelson, Sabaah Folayan and Damon Davis have all made movies that help explain our nation’s current efforts to face hundreds of years of inequity. Here’s what they said.” – The New York Times

The budget passed by the City Council cuts municipal support for the arts citywide by 40% to $5.84 million, and even that amount is $1 million more than the mayor proposed as he attempted to close a $750 million deficit. The city’s arts office has been eliminated entirely, as has funding to film production and historic preservation agencies, and hundreds of other organizations have taken hits. – The New York Times

It’s a bit of welcome news after major cuts from the city government: “467 Philadelphia-area arts and culture groups plus more than a thousand individual artists are receiving a total of $4 million raised through … a multidonor fund assembled in response to the pandemic. … The fund ended up being able to make an award to every group that applied for support and met eligibility requirements.” – The Philadelphia Inquirer

“The only thing that really matters in life is your progeny, the people who come after you, the people you send out to the world. They’re either toxic or nontoxic.” – Los Angeles Times

Glaser scrawled the first draft of the logo in the back of a cab, in 1976, red ink on a scrap of envelope; the sketch is now, fittingly, in the possession of the Museum of Modern Art. He made it for a marketing campaign for New York State, in 1977, which was a tricky moment for the city in particular—it didn’t seem very lovable. In the final design, the typeface is American Typewriter, friendly and approachable, with a cartoonish cast (notice the rounded bent knee of the “N”) that was Glaser’s signature, as if he anticipated the logo’s ascendance as kitsch. – The New Yorker

For most people most of the time, our perception certainly feels real. But the notion that our senses capture an objective external reality can be dispelled by considering something as fundamental as colour, which can be culturally influenced and, even within a single culture, leave the population split between seeing the same picture of a dress as black-and-blue or white-and-gold. – Aeon

I don’t know how I’ve managed to survive the simultaneous losses of my beloved spouse and the art form to which I have devoted more than a decade and a half of my life. But I’m still here, and if Hilary’s death and the closing of America’s theaters didn’t kill me, then I figure I’m in it for the long haul. I hope you are, too. – Terry Teachout

Mr. Reiner gained a national following in the 1950s as a brilliant straight man opposite Sid Caesar on influential TV comedy programs, directed movies that launched Steve Martin’s film career in the 1970s and 1980s, and played an aging con man in the popular “Oceans 11” movie franchise of the 2000s starring George Clooney and Brad Pitt. – Washington Post

With coronavirus cases surging again in much of the U.S. and not really slowing in the UK, and with the release of the summer’s two big tentpole titles, Tenet and Mulan, postponed, AMC and Cineworld/Regal have pushed back their previously announced reopening dates to the very end of July. – Variety

The National Gallery and Royal Academy will accept visitors the following week, but the Tate won’t open its four locations until July 27; others are waiting until August or September, and many won’t yet commit to a specific date at all. Most venues are limiting admissions numbers and require booking tickets in advance; masks are “recommended.” – BBC 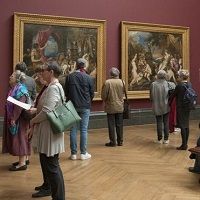