Apart from his tombstone and the old stone buildings, every Kafka attraction I visited was built in the 21st century. Czechoslovakia’s uneasy leaders had tried to scrub Kafka from Prague’s history; now, the city welcomes his lucrative presence every day. – LitHub

This vicious circle of song optimization / playlist optimization may be the path of least resistance but it can ultimately lead to an unsatisfying overall music experience. Classical music provides an antidote to the algorithm-defined mainstream, and of the status update driven chaotic maelstrom that is digital life. Now we are starting to see the signs of a new generation of Classical music fans searching for a refreshing, reassuring alternative to the tumult and homogeneity of mainstream. – Music Industry Blog

Some of the earliest scientific studies of creativity focused on personality. And some evidence suggests that innovation comes easier to people with certain personality types. A 1998 review of dozens of creativity studies found that overall, creative people tend to be more driven, impulsive, and self-confident. They also tend to be less conventional and conscientious. – Nautilus

“I’ve known periods of chronic depression, the most serious of which was in 1974. It was impossible for me to live without a plastic lobster that I took with me everywhere, leaving it behind only at the very moment I went on stage.” – The New York Times

The fashion industry in Africa is on the rise, especially in cities like Kinshasa and Capetown. But while fashion designers might get noticed in Paris and New York, models have a different story. As Naomi Campbell noted in 2013, “Top designers often shun black models completely or opted to include just one in their shows.” – Der Spiegel

Author Mona Awad: “Iwas definitely interested in leaning into that and the horror of it, the scariness of that kind of groupthink. It is scary. I guess it’s one of the risks you take when you go into one of these programs: that fear that you’ll start all speaking the same language, and then you’re not an individual artist anymore with your own imagination.” – LitHub

Star power – even stars like Thor and Valkyrie, er, Chris Hemsworth and Tessa Thomson; even Emma Thompson and Mindy Kaling, for heck’s sake – is crashing and burning on the big screen this summer. But movie stars on Netflix are doing just fine (or so Netflix says). Can Netflix save the movie star? – The Guardian (UK)

Jacobin Magazine’s take on the Baltimore Symphony musicians’ lockout emphasizes worker solidarity, even for elite musicians. “A lockout is probably the nastiest of tactics used by orchestra management to force union musicians to sign lackluster contracts. Lockouts take the power of withholding their labor out of the musician’s hands. Management does this for good reason, since orchestras with strong unions, aided — crucially — by community and audience support, have repeatedly used militant tactics to their advantage.” – Jacobin Magazine

“Stopping at sites including the Harriet Tubman Memorial and the former Lenox Lounge — now a Wells Fargo — the 16-part ritual tells the story of a tribe fighting for its freedom with the help of Libra, a time-traveling descendant of Tubman who flies in from the future. As it progresses, the work grows more interactive; at Amsterdam Avenue, for instance, audience members write their hopes on slips of fabric and attach them to a sprawling ‘dream net.'” – The New York Times

“I had never done an opera with five protagonists before. I had to figure out how to do that. I was fascinated by group singing. Then I began thinking about that period in time, Take 6 and a lot of the boy groups that were popular in that time. I started looking at what I could do with close harmony for five voices.” – The Washington Post

“Relatives and former students of the late Mexican artist Frida Kahlo have dismissed claims that a recently discovered recording could be the only surviving trace of her voice.” – The Guardian

Despite the praise that critics (try to) give John Malkovich in the horndog-movie-mogul role, their verdicts are clear. “Bitter Wheat is a bitter disappointment.” “Mamet’s monstrous misfire.” “[Its] most shocking quality is its laziness.” “Bad, weird, and pointless.” – Los Angeles Times

“As part of a broad central government initiative, thousands of museums have been built across the country over the past decade, with a staggering 451 being opened in 2012 alone. … [But] the obsessive drive to build more and more cultural facilities has resulted in a conspicuous dearth of exhibits, let alone demand from people wanting to visit them — leaving hundreds of massive, often opulent, and architecturally iconic buildings sitting underused or even completely empty today.” – Forbes

Roberto Alvim announced last week that he was closing his São Paulo troupe because he was the target of criticism and boycotts for his conservative political views. President Bolsonaro promptly appointed him head of theatre at the National Foundation of the Arts — and from that perch, Alvim has called for right-leaning arts professionals to submit resumes for a database that can be consulted when awarding federal funding. – The Art Newspaper

“The Royal National Orthopaedic Hospital in north London, where it was based, … said it had planned to close the centre in 2020 as part of a wider plan to concentrate specialist services in fewer centres, but had accelerated the process following the resignation of the centre’s sole consultant.” – The Stage

“Is there anything, anything at all, to be said for a character whose name all too obviously part-rhymes with Harvey Weinstein? Well, he continues to have sympathy for illegal immigrants, despite or perhaps because of his mother’s murder. But Mamet can find no good word for his films.” – The Daily Beast

These kinds of negative projections of the people who have made country music, and have listened to it, linger even unto today. The stereotype is that they all harbour conservative political and social beliefs, setting them as sexist, racist, jingoistic and fundamentalist Christian by nature. But this image is a lie. For, right from the start, country music spoke up with a progressive voice. – Aeon

Seattle’s Greg Lundgren has grown up to be an artist, curator and entrepreneur who has spent the past few decades hunting around Seattle for negative zones (derelict properties, soon-to-be-demolished buildings) and fortifying them into fleeting new homes for art. – Seattle Times

Will these different digital audio worlds continue to exist separate, parallel, and mostly unintrusive of each other? Or will they, over the medium to long term, end up colliding in direct competition? – NiemanLab (3rd item)

DeepFakes created by artificial intelligence can now credibly fool anyone into thinking they’re real. “By combining this real clip of Albert Einstein speaking, for example, with a photo of the famous mathematician, you can quickly create a never-before-seen lecture.” But imagine the ill uses this can be put to. – The Verge

“The [six-episode miniseries] is a black comedy about an angel (Michael Sheen) and demon (David Tennant) who conspire to sabotage the End Times after the Antichrist is born in a small British village.” The petition, which was created by a group called Return to Order and has gotten more than 20,000 signatures, says, in part, “This is another step to make Satanism appear normal, light and acceptable. … Please sign our petition, telling Netflix that we will not stand silent as they destroy the barriers of horror we still have for evil.” – Newsweek

“In its 15-year history, more than half of Theatr Genedlaethol Cymru’s productions have been directed by women and close to half have been written by female playwrights. Notably, of the companies in the Arts Council of Wales’ national portfolio funded to regularly create work in Welsh, 60% are led by female directors. So, why does there appear to be a more egalitarian approach?” – The Stage 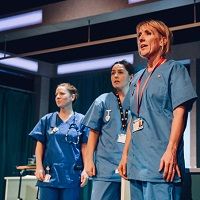