In the middle of the night earlier this month, 33-year-old Jorge Arizamendoza pried open an iron gate and scaled a fence at the Ancient Spanish Monastery in North Miami Beach, a 12th-century structure from Segovia which William Randolph Hearst brought to the U.S. piece by piece. He then destroyed the head of a statue of King Alfonso VII of Castile and León from 1141. (Three days later, he came for Sunday Mass and threatened to shoot the priest and congregation, at which point he was arrested.)

The Guardia Civil has arrested an antiques collector in the town of Bullas and impounded an enormous cache: 4,000 archaeological artifacts, some dating to the Bronze Age; 5,000 rare coins; 150 relics, included a supposed piece of the True Cross once certified by the Vatican; 40 paintings; and 30 manuscripts, including a late medieval Book of Psalms.

“There’s more than a little irony to the impending collapse of Barnes & Noble. The mega-retailer that drove many small, independent booksellers out of business is now being done in by the rise of Amazon. But while many book lovers may be tempted to gloat, the death of Barnes & Noble would be catastrophic – not just for publishing houses and the writers they publish, but for American culture as a whole.”

Lonnie Bunch, founding director of the National Museum of African American History and Culture: “We felt it was really important to take on things that might be deemed controversial or difficult. And the challenge for us was to find the right tension between those moments of pain and those moments of resiliency. … This is not the Holocaust Museum. This is not a community simply defined by victimization. But rather, it’s a community that has, in many ways, helped America live up to its stated ideals.”

“His record of commissioning opera is nothing short of astonishing. But it’s pretty clear that Gockley’s main achievements as General Director were organizational. He has been an exceptional manager in a field that is notably lacking in exceptional managers.”

In addition to his 27 years with the pink paper, “Murray worked as a lecturer in philosophy at Birkbeck, University of London, into his 60s. In philosophy, as in music, he would easily become immersed in his subject. One student later recalled how they had met at his house and continued to talk even when the fire brigade arrived to put out a blaze in the apartment downstairs.”

“They are going to repair Jesus’ tomb – with titanium bolts. Over the next nine months, a team of Greek conservationists will restore the collapsing chapel built above and around the burial cave where the faithful believe that Jesus was buried and rose from the dead after the Crucifixion.”

“Tate said there had been 143,000 visits since the revamped and expanded modern art gallery opened on Friday. On Saturday alone there were more than 54,000 visits – around double the usual visitor number and the highest ever attendance for a single day.”

Today, the idea that a work written for the theater could “save” a nation—for this was what Aristophanes’ word polis, “city,” really meant; Athens, for the Athenians, was their country—seems odd, even as a joke. For us, popular theater and politics are two distinct realms. In the contemporary theatrical landscape, overtly political dramas that seize the public’s imagination (Arthur Miller’s The Crucible, say, with its thinly veiled parable about McCarthyism, or Tony Kushner’s AIDS epic Angels in America) tend to be the exception rather than the rule.

“At present, contemporary music in U.S. academia has primarily become the space where young U.S. citizens can explore sound creatively without ever needing to consider that music may perhaps be more than a commodity. Without having a desire to be polemical, I am afraid that this music has merely become the elitist entertainment of a shrinking upper-middle class that still can afford to go to college. Perhaps from the very beginning, the project of New Music had already been defeated, but that does not mean it is dead.”

“Soon you could be chatting with your computer about the morning news. An AI has learned to read and answer questions about a news article with unprecedented accuracy.”

The Chicago Park District on Sunday accused Friends of the Parks of issuing an “outrageous” list of demands that is “nothing short of extortion” and will likely be the “final nail in the coffin” of efforts to keep movie mogul George Lucas’ museum in Chicago.

Louis Menand: “The science of preferences dates back to the origins of the advertising and public-relations industries, but the Internet has provided it with a vast new field of operations. Compared with television, which basically had advertisers throwing tomatoes at barns labelled, for example, ‘Women eighteen to thirty-four,’ the Internet is a precision instrument.”

Disney’s rebound has led to increased one-upmanship within the Mouse House. According to one source, “Pixar’s attitude is, ‘We’re Pixar.’ And Disney is like, ‘Well, then, why don’t you have the highest-grossing animated film of all time?’ ”

“Suddenly, an increasing number of independent presses are going into the retail book business, morphing into full-service community hubs for book browsing and expanded literary programming. Some see retail floor space as an opportunity to bring more customers and supporters to their front doors. Others see it as an important source of income to support the publishing. All say it fulfills their missions as the literary hearts of their communities.”

“What if our partiality to particular artists is, consciously or unconsciously, calibrated to line up with the preferences of our peers — and/or to distinguish ourselves from people we’d rather not be associated with?”

“The summer blockbuster [in 2016] has gone from something to be enjoyed with popcorn and a Coke to something that may possibly shatter your existential reality. Needless to say, all these blockbusters made for consumption here and abroad have a common theme: the world is ending and (almost) no one can save us, except for an unlikely anti-hero.”

“This video from the Museum of Fine Arts in Boston takes us behind the scenes of the conservation work necessary to restore Vincent van Gogh’s Houses at Auvers. According to [conservator] Lydia Vagts … the ‘gunk’ … comes from previous cleanings, and includes varnish residues, wax residues, and cotton fibers.”

“A few days before Ryan McNamara’s performance piece Battleground premièred at the Guggenheim, last month, his cast of nine dancers had clocked an impressive six hundred and fifty hours of rehearsal. Unfortunately, they’d practiced together for only one of them. That might have caused most choreographers to panic, but McNamara isn’t a choreographer, he’s a performance artist, and fragmentation is kind of his thing.”

“It’s for us to change the world, but not that word. That is the prerogative of the U.S. government, which created and sustains the confusing terms ‘nonprofit’ (not existing or done for the purpose of making a profit) and the distinct and different ‘not-for-profit,’ which merely serves as a classification in the U.S. tax code.”

My favorite books about writing are really books about thinking, and crafting those thoughts into powerful, public form. So, whenever I’m in a thinking thicket … read more

Chris Ziemba, Manhattan Lullaby (Outside in Music). His abilities honed by studies at the Eastman School of Music and Juilliard, 29-year-old pianist Chris Ziemba is in demand on the New York scene. His debut recording … read more

The adventure of the bungled capper

Ivy Compton-Burnett admitted in old age that she could no longer read the novels of Jane Austen, which she loved, because she knew them so well that they could no longer hold her attention. Much the same thing happened to me with … read more

This bombshell (in the form of an internal memo) has just been dropped by Thomas Campbell and Daniel Weiss, director and president, respectively, of the Metropolitan Museum. … read more

Jam sessions are not exclusive to jazz. They happen in virtually every genre of music — folk, bluegrass, rock, Indian, Afro-Cuban, freestyle rap, sometimes even among highly trained and disciplined classical musicians, when they think they won’t … read more

We take the world with us when we go to the theatre. Our private swirls of panic and joy. Whatever public pains have been doled out. I came to Shoreditch Town Hall to see YOUARENOWHERE just a short while after hearing that MP Jo Cox had been murdered. … read more

I once wrote about the Roland Kirk of the days — ”long before he added ‘Rahsaan’ to his name, before he became famous, when he was a tornado roaring out of the Midwest, totally blind and full of insight, playing three saxophones at once, … read more

Painters’ Paintings: Who Owned What When

You never know what might spark the idea for an exhibition, and at the National Gallery in London it was a 2011 gift left to the U.K. by Lucian Freud. He bequeathed a work called Italian Woman by Corot, which he had purchased 10 years earlier … read more

Can computers help us better understand art? What the world thinks is creative. Why is it still okay to discriminate against stupid people? How gaming is taking over. And the “Rotten Tomatoes of Books” reveals a problem with how books are reviewed.

“The three museum’s plans, all announced within four weeks of each other, illustrate a growing problem in cultural fundraising today. While there seems to be ample money to finance expansions—a recent survey by The Art Newspaper found that US museums spent $5bn on building projects between 2007 and 2014—there is less money available to pay staff.”

“Harefield hospital in London is giving some of its patients a taste of Bollywood and classical Indian dance – and the results are apparently proving helpful to health.”

“The three departures precede what is expected to be a series of voluntary buyouts, which the museum has said it hopes will allow it to avoid layoffs. The Met has also set a hiring freeze and halted some renovation projects.” 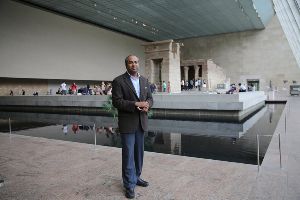