“The pronounced stock shortage inside the Librairie des Puf” – that’s for Presses universitaires de France – “is not the result of an ordering mistake, but the heart of the shop’s business model.”

“Here’s Teen Vogue on another photo of Jaden Smith in a skirt suit: ‘The midi skirt set sends up a poignant rejection of heteronormativity.’ What sage could have predicted that heteronormativity would eventually make its way into the vocabulary of teen magazines and shareable web content? Only, perhaps, the queer theorist Judith Butler.”

“In the early nineteenth century, a few scenic destinations became hot spots for tourism … In fact, by the 1860s [the number-one attraction] was so popular that travelers complained that souvenir sellers and aggressive guides had spoiled the place.”

“Refugee Tales features stories including [Chris] Cleave’s ‘The Lorry Driver’s Tale’, [Ali] Smith’s ‘The Detainee’s Tale’, [Marina] Lewycka’s ‘The Dependant’s Tale’ … [The book] stems from refugee charity the Gatwick Detainees Welfare Group, which sends volunteers into the two detention centres at Gatwick airport to speak to the hundreds of people who are held there.”

“Wouldn’t it, I mean, be a remarkable coincidence to find ourselves alive at just the moment where technology finally shows itself to be adequate to reveal to us the true nature of reality? And how are we supposed to interpret the equally certain claims of people in other times and places, who believed that reality in fact reflected some device or artifice of central importance to their own culture (e.g., horologia, mirrors, puppets, tjurungas…)?”

Simon Hattenstone: “I have never met somebody who can go from wilfully cantankerous to heartstoppingly tender so quickly; who can make me want to scream with frustration and move me to tears in the same sentence.”

“We have become fundraisers who occasionally get time off to do a play, as opposed to theatre directors who have to take an interest in fundraising.”

“Pakistani cinema is assumed to have been untouched by the 20th century’s avant-garde film movements. But, with its documentary treatment of village life, labour and capitalist exploitation bearing recognisable traces of socialist realism, Italian neo-realism and Indian parallel cinema, Day Shall Dawn proves otherwise. The intimate involvement of revered poet [Faiz Ahmad] Faiz – credited with story, lyrics and dialogue – adds gravitas to an already intriguing endeavour.”

“Rising on the Plaza de la República [in Mexico City], the massive structure marks the first time the Vatican has given permission to reproduce the chapel on this scale … Michelangelo’s paintings are photographic reproductions printed on canvas, their religious scenes composed of over 2.6 million images each about an inch large.”

“Stateside, she fundraised for eight years to acquire her current violin, while European countries loan instruments to their top artists. Being a self-employed artist in the United States means paying for your own health insurance or going without, not the case in Europe. But at the end of the day, she says, New York wins out on …” (audio)

“‘I’m honored by the award and by its timing,’ Murray said in a statement. ‘I believe Mark Twain has rolled over in his grave so much for so long, that this news won’t disturb his peace.'”

“The new algorithm, developed by researchers from MIT’s Computer Science and Artificial Intelligence Laboratory, can predict the precise acoustical qualities of a sound, and then simulate it in an extremely realistic way. When analyzing a silent video clip, such as an object being hit by a drumstick, the system can produce a sound for the hit that’s realistic enough to fool human listeners.”

“Over just seven years, the games-maker Lumosity rocketed from zero to 50 million users, promising rapid improvements in general intelligence by playing brain-training video games for just a few weeks. (Lumosity recently settled with the United States Federal Trade Commission for making unsupported claims that its product was scientifically validated.) … So, does all this mean that there is no hope for cognitive enhancement? My view is that there is actually lots of hope, as long as we are not unrealistic about what we can achieve.”

“A first-of-its-kind study suggests that if stronger educational outcomes are your goal, music is the better choice. But playing sports also has its benefits — and participating in both appears to be even more academically advantageous.”

Ismene Brown: “So here is what the Royal Ballet, Rambert Dance and Akram Khan think about it, three big hitters in ballet and contemporary dance, representing the issues of concern to management, artistic profile and creative work.”

“The Smithsonian has abandoned its plan to open its first stand-alone exhibition space in London, deciding instead to partner with the Victoria and Albert Museum in its new space at the Queen Elizabeth Olympic Park, officials said Monday. The decision represents a significant retreat from the Smithsonian’s original plan to occupy a 40,000-square foot venue in the cultural complex.”

“Researchers at the Freiburg Institute for Musicians’ Medicine wanted to find out how much loudness effects enunciation when it comes to opera singers.”

“In the artist Duke Riley’s project Fly by Night, he sets two thousand homing pigeons, outfitted with L.E.D. lights, into motion. Riley’s objective? For people simply to notice the birds, the people, and the city that surrounds them.”

Jesse Green: “All four of the musical performance Tonys went to black actors … Ten other actors of color were nominated, as were, even more unusually, a number of black and Hispanic and Filipino artists in the creative and technical categories. … As a result, all the attention to diversity on the show seemed natural and coherent, not inanely appliquéd as at February’s Academy Awards. … This was not just the least white Tonys I can recall but the most earnest. As one commenter on last night’s Vulture liveblog put it, ‘I am so moved by the lack of cynicism in this broadcast, this theatre season.'”

This is the fourth and final essay in a series of “We the Audience” posts designed to introduce my readers to the citizen artists working in some of South Africa’s most challenged areas. … read more

A lesson from Hamilton

So on Friday I zipped down from DC to Baltimore to attend the League of American Orchestras conference. Whose theme this year was diversity, aka “The Richness of Difference.” … But one thing I’m sure of. Symphony orchestras — or just about any major classical music institution — can’t match the diversity impact of Hamilton ..., [impact] which, with all respect, the League can only dream about.  …read more

Correspondence: When Miles Sat In With Mel

British audiences are no longer scared of European theatre. It has taken us years – decades – to feel relaxed about non-representational stagings, actors stripped of plummy tones, the fourth wall not only breached but blown to smithereens. … read more

With traditional delivery/distribution for the arts changing, we’re looking at new models: Maybe Rotten Tomatoes or Netflix, anyone? We definitely have to change our ticketing model (and “Hamilton” is trying). A rethink of program notes. And some evidence that making “augmented activity” in movies leads to increased demand for the arts…

“Welcome to the LOL biennial. And brace yourselves.”

Maybe our biggest problem with teaching music in schools is the way we teach it. Hollywood thought making blockbusters would save it. Surprise! How charity auctions take advantage of artists. The internet is changing what we value in the world. And the wonder of Bill T. Jones

“New Music is inherently in a difficult ideological position: it is in conflict with the economic, educational, and political structures that contribute to its birth, but it must simultaneously reconcile itself to them in order to attempt to bypass the anticipated consequences that these very conditions cause.”

“The appeal for tolerance and the salute to the inclusiveness of the theater community fit seamlessly into a broadcast that promoted the diversity of the Tony field in the wake of #OscarsSoWhite. (Though when the camera ventured into the orchestra seats of the Beacon, the hashtag could have been #AudienceSoWhite.)”

Tiffany Jenkins is “unconvinced that museums have any real power either to atone for past sins or to address social ills. She notes, quite rightly, that the experiences we have in museums are personal, emotional, and unruly.” 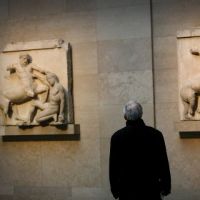