“The role of women art-makers in Native communities has gone widely ignored. Now a bold museum show [at the Minneapolis Institute of Art], by and for these women, is shining a light on 1,000 years of their art.” – The New York Times

“As of August 2017, more than 70 percent of viewing time was being driven by automatic recommendations. And the content that gets promoted is even more aggressively selected for engagement gravity, meaning the sensational and divisive gets pushed to the top of the feed. One unintended consequence of YouTube’s endless pursuit to sell more ads, Zeynep Tufekci has argued, is that the platform has become “one of the most powerful radicalizing instruments of the twenty-first century,” pushing unsuspecting viewers deeper and deeper into politically unhinged, conspiratorial rabbit holes just to keep their attention for a few more minutes.” – The Baffler

“In 2010, Kate Wallich was a 22-year-old choreographer in Seattle, … [who] had started her own dance company, Studio Kate Wallich, but hated how insular the contemporary dance world felt (dancers were the only ones who came to class or performances). So she made a bold decision: she opened up her Sunday morning company class to, well, anyone — and soon Dance Church was born. … The ‘church’ part has nothing to do with religion — the name stuck because the class happens on Sunday mornings and because it felt like a weekly ritual.” – Dance Magazine

All kinds of companies pick through our online behavior for clues about how we might be convinced to spend money. These practices particularly affect poor people, who are more dependent on cheap or free online services. The services appear to cost nothing, but payment is in data rather than dollars.  – The New Republic

“Despite the constant avowal and assertion of the intrinsic value of arts and culture, funding for art and culture is still often treated as a discretionary spend which is somehow secondary to the needs of what are defined as being more essential services like the NHS. But art and culture do not only make a huge contribution in their own right to the taxation which funds those essential services. They are also the principal reason for the constantly acclaimed commercial success of the creative industries, which make an even larger contribution to the public purse, which funds those essential services we all value.” – Arts Professional

“As part of the Courtroom Artist Residency, artists may sit among the friends and family members of defendants waiting to be tried at Cook County’s Criminal Court and witness the brisk flow of 100,000 people processed there annually. The programme is unaffiliated with the court system, however, which may not be aware of its existence. ‘Artists’ opinions are not normally sought or included in courts,’ says Marc Fischer, the residency’s organiser and the founder of the artist project Public Collectors.” – The Art Newspaper

The first sound that results in the primary auditory cortex is a standard pitch. Other regions of the auditory cortex add more complex elements like timbre and specific sound quality. To add to the complexity, prior research has revealed that multiple areas of the brain become activated by listening to music — many of them not specific to music processing, such as emotional processing. Rhythmic processing on its own involves multiple overlapping structures of the brain. – Ludwig Van

“‘I’ve always been attracted to those ballet steps, and using them as a framework, or form, but then changing stuff within that,’ she says. Nevertheless, breaking into the ballet world wasn’t a clearcut goal of hers. … When asked when she became interested in working with ballet companies, Tanowitz answers, laughing, ‘When they hired me!'” – Pointe Magazine

“[Emilie] Skinner launched DNCB in 2011 after dancing with Contemporary Ballet Dallas and carved out a niche re-staging groundbreaking examples of early modernist ballet, particularly pieces by the influential Ballet Russes such as The Afternoon of a Faun, Le Train Bleu and Parade.” – Dallas Morning News

The creators of Sun and Sea (Marina) at the Lithuanian pavilion say they had never really expected more than 15 visitors at a time and certainly never expected to win the Golden Lion or draw crowds. So the funding plans they had weren’t adequate to what actually happened. They’ve cut down from daily performances (when the press and judges were in town) to once on Saturdays; they say that “[adding] a Wednesday performance is our maximum ambition.” – The New York Times

The current distinction between creators and influencers has much more to do with what platform a person gains her fame on than her gender. – The Atlantic

As in small companies. More and more small companies are appearing not as smaller echoes of larger companies, but as viable alternatives that allow artists more creative possibilities.  – Washington Post

There are days when sitting in a room that noiseless sounds appealing. But some people are so unaccustomed to such levels of quiet that, after just a few minutes inside the chamber, they become disoriented.  – The New Yorker

Lawmakers thought they were buying the orchestra enough time to re-examine its costs, raise more money for its endowment and develop a sustainable fiscal structure that would not entail sacrifices on this scale for the musicians. If that wasn’t the case, the BSO management should have said so before Thursday. – Baltimore Sun

This is a thorough takedown of tote bags, media people, tote-toting people, and New York, with a couple of arrows aimed directly at Brooklyn. “the tote is a stand-in for being in-the-know. ‘Yes, after Bon App called Portland the country’s best food city, I did make a trip up to Maine,’ suggests a tote from Rose Foods, while a bag from NPR indicates how arts-friendly you are by supporting public broadcasting. Last year,New York Magazine quite literally ran a round-up titled The Coveted Tote Bags That Scream ‘Status.”” – Vice

Kaling was initially embarrassed about that when she was on The Office, but she’s over it. And now, as a 39-year-old movie writer, she says, “It does feel amazing to have done this, but I’ve worked so hard to get here, so it’s not a big surprise. A journalist asked me if I have impostor syndrome and I said: ‘I actually don’t, because I’ve really put in the time.’ And I could tell he thought I was kind of cocky.” – The Guardian (UK)

The chair of the players’ committee strode to the front of the stage and said, “We are stunned and grieve for our beloved B.S.O. … We will be making music with even more passion and purpose tonight and for as long as our management keeps the lights on and the doors unlocked.” Then they played, unscheduled, Edward Elgar’s “Nimrod.” – The New York Times

As theatre makers confront a rapidly shifting landscape – one of them, a professor at the University of Missouri-St. Louis, saw her entire department eliminated, all student productions ended, and her position moved to communications – they find inspiration and ideas with each other. “Getting to be in a room and talking with other artists who know the same kind of stress and extra weight that you’re feeling as a person of color, that was probably the most special part of the experience,” one said of her time with the Rising Leaders of Color cohort. – American Theatre

The museum, which opened on Staten Island in 1947 after the collector Jacques Marchais and a local Italian stone mason worked to find the right stone for a “traditional mountain feel,” is in need of all kinds of things – staff, time, and money, mostly, though the executive director is pleased that grants are coming in. She notes, “Every project takes time and money.” – The New York Times

Zabriskie’s New York gallery started in 1954 and closed in 2010; her Paris gallery was so beloved that when she closed it after a 21-year run in 1998, the city awarded her a Medal of Honor. – The New York Times

Vinson Cunningham and Alexandra Schwartz have been staff writers at The New Yorker since 2016, and they “filled in on the stage beat while longtime chief critic Hilton Als was on leave. Cunningham and Schwartz officially begin as alternating co-theatre critics next week. (Als is reportedly not leaving theatre criticism entirely but stepping back from regular reviewing.)” – American Theatre

In the planning for New York’s Figment Arts Festival, moving from Governors Island to Roosevelt Island this year, “‘Everything was fine,’ Judith Berdy, a longtime resident said. ‘And then came the catastrophe of the cherry blossoms.'” – The New York Times

The return of the paper diary may be at hand. “Contrary to what I’d like to believe, media that lives ‘on the internet’ is not actually floating above our heads in a cloud, like Mike Teavee in WonkaVision. It exists on real, physical servers that are owned by these tech companies. And, sometimes … things go wrong.” – LitHub

They might not be the prettiest, or the most interesting architecturally. But significant bits of history happened there. And they’re in danger of being torn down or falling down. – CityLab

Mark Swed: “It is still the quirkiest major music festival in America, and possibly anywhere. If anything, Ojai has become even more a habitat for compulsive experimentation as well as a magnet for many of the world’s most accomplished musicians. Charm and informality continue. But thanks in large part to Tom Morris, the Ojai festival is now a Destination.” – Los Angeles Times

“The site, The Mumble, is contacting artists appearing at this year’s festival to offer ‘a digitally sophisticated Skyflyer’, comprising a review and interview, for £50. Opting for just a review would cost £30.” – The Stage

“In this series, a variety of disabled theatre artists: managers, designers, producers, and dramaturgs, will share how they do their work, as well as their vision for an accessible future in professional theatre.” – HowlRound

Six years ago, the company moved into a newly-rehabbed 11,000-square-foot space with rent and expenses of $15,000 a month — expensive, though below market for the size and location. But the expense of building damage and other after-effects of Hurricane Harvey (2017) led to a cash-flow problem from which METdance has never recovered. – Houston Chronicle 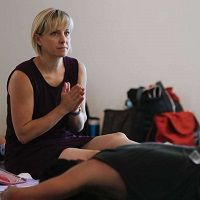