Nick Douglas explains why the seemingly unserious speech tic can be crucial for keeping a listener’s attention.

“Installing and tuning the Earth Harp is a two-day process. On this day, [inventor William] Close is getting ready to drop 42 strings, weighted by water bottles, off the edge of the 700-foot building. His tech, Jonathan Golko, will catch them and attach them to the harp’s main resonating chamber. The following day, Close will tune the harp, a process that he’s got down to a science. He can vibrate four notes out of each string.”

“Over the years, I’ve grown used to seeing the cinema dismissed as an art form for a whole range of reasons: it’s tainted by commercial considerations; it can’t possibly be an art because there are too many people involved in its creation; it’s inferior to other art forms because it “leaves nothing to the imagination” and simply casts a temporary spell over the viewer (the same is never said of theatre or dance or opera, each of which require the viewer to experience the work within a given span of time). Oddly enough, I’ve found myself in many situations where these beliefs are taken for granted, and where it’s assumed that even I, in my heart of hearts, must agree.”

Jose María de Eça de Quierós “established his reputation with his tense and claustrophobic first novel, The Crime of Father Amaro. It is a debut that’s also not one: it was twice seriously revised after publication. (Among other changes, the third edition is almost five times as long as the first.)”

Only about 8 percent of current literary journals pay anything like a professional wage to their contributors (and slightly more pay their staff, but that’s a different question). So maybe “the whole enterprise of writing literary fiction is a complete waste of your time”? It’s a valid question.

Noëlle Santos has lived in the Bronx her entire life, and she sees the development wave coming. Now, “Santos is working to open the borough’s newest bookstore, which will also be its only one. She’s calling it Lit Bar, because it will serve wine and, she hopes, be lit as hell.”

“On Wednesday Tate said it received 478,082 visitors. That averages at 4,300 visitors each day. Almost 35,000 advance tickets were sold before it even opened, more than any other show in Tate history. Demand to see it led to Tate Britain opening until midnight on Friday, Saturday and Sunday of its final weekend.“

The Albee Estate wouldn’t speak directly to NPR about the decision. Instead, it sent a statement, saying Albee had remarked on several occasions that a mixed-race marriage in the early 1960s would not have gone unnoticed in the script — though Albee did approve the casting of a black actress as the older professor’s wife when the playwright was still alive. This is the first time the estate has had to deal with this issue since Albee’s death in September 2016.

Diep Tran profiles actress/playwright Mfoniso Udofia and her “Ufot Cycle,” a planned series of nine plays. (About two of them, the New York Times‘s Jesse Green wrote, “[they] offer a moving and powerful corrective to the notion that what immigrants leave behind is always awful, and that what they find is always worth the trip.”

“Many writers of historical fiction feel drawn to the untold tale. They want to give a voice to those who have been silenced. Fiction can do that, because it concentrates on what is not on the record. But we must be careful when we speak for others… If we write about the victims of history, are we reinforcing their status by detailing it? Or shall we rework history so victims are the winners?”

“Central to both cases” – Dana Schutz’s Open Casket, over which there was a noisy controversy at the Whiney Biennial, and Sam Durant’s Scaffold, now being removed from the Walker Art Center’s sculpture garden – “are issues of cultural appropriation and artistic freedom. Should white artists, no matter how well intentioned, represent harrowing stories that are not their own to tell? Conversely, should any subject matter be off-limits to artists because of their race, ethnicity, gender, sexual orientation or other life experiences?”

“The $32 billion sports brand has asked him to model for its latest campaign for NikeLab’s all-conditions gear in both still and video ads.”

The most popular segment of the series, transmitted from the company’s residency at the Chinati Foundation in Marfa, Texas, drew 211,300 views by itself. “What’s interesting is that this livestream wasn’t what we’re typically used to: It was more of a live dance film happening in real time than an intimate peek in on rehearsal.”

“Why? While most books can survive centuries or even millennia, Tunglið – as its two employees tell me – ‘uses all the energy of publishing to fully charge a few hours instead of spreading it out over centuries … For one glorious evening, the book and its author are fully alive. And then, the morning after, everyone can get on with their lives.'”

Here is a Rothko that isn’t a Rothko, a Coco Chanel suit that isn’t a Chanel, a Babe Ruth baseball glove that the Babe never set eyes on, and let’s not forget all the silver by Alt-Paul Revere. You name it, and Treasures on Trial: The Art and Science of Detecting Fakes probably doesn’t have it, but it might have something that might be. In the immortal words of master forger Elmyr de Hory: “If my work hangs in a museum long enough, it becomes real.”

“Another story is emerging from several recent papers and columns by economists and economic writers. Instead of a world without work, they say, there is currently more evidence for a world with too much work—and not enough humans to do it all. Rather than high-flying investment in machines and similarly high unemployment, there is strangely low investment and happily low joblessness. How can anybody say robots are killing jobs when the killer is nowhere to be seen and the supposed victim isn’t even dead?”

Roughly 20 to 30 full-time employees in New York, including editors, ad sales and office workers, were told last week that they were all being terminated in two weeks — but could “reapply” for their jobs as contract freelancers. Louise Blouin’s mini-art publishing empire, which includes Modern Painters, Art + Auction and the Web site Blouinartinfo.com, has struggled financially in recent years.

“Beyond doomsday proclamations about mass extinction, climate change, viral pandemics, global systemic collapse and resource depletion, we seem to be seized by an anxiety about losing the qualities that make us human. How did we arrive at this moment in history, in which humanity is more technologically powerful than ever before, and yet we feel ourselves to be increasingly fragile?”

“For decades, Mr. Lewiston, a classically trained pianist, roamed the four corners of the earth with tape recorder in hand, seeking out Tantric Buddhist chants in Tibet, festival music in Oaxaca, Mexico, the kecak monkey chant of Bali, the panpipe music of Peru.”

Sam Durant’s piece Scaffold, based partly on the gallows at which 38 Dakota men were hanged in 1862, was greeted with outrage by Native Americans when it appeared in the Walker’s about-to-reopen sculpture garden. It will now be taken apart and burned in a ceremony overseen by Dakota elders.

On Wednesday, some visitors to the National Museum of African-American History and Culture “found the noose on the floor in front of a display titled, ‘Democracy Abroad. Injustice at Home.'” It was the second noose found on Smithsonian grounds this week.

Yes, strange as it may seem, the San Francisco Museum of Modern Art had not ever had a curator position dedicated to contemporary art – which (this is key) the museum defines as “the art of the 21st century.” The job goes to international curator Eungie Joo.

While studying with Ansel Adams [circa 1960], he told her she was ‘making black and white photographs, but thinking in color’ – color photography at the time was mostly found in advertising – and recommended her to Polaroid. The corporation asked Cosindas to experiment with a new instant-developing color film, called Polacolor. By the end of the 1960s, Cosindas developed her signature painterly style.”

“The work [by Giuseppe Penone], titled Foglie di pietra (2017), was commissioned by the luxury fashion brand Fendi and placed outside its flagship boutique. But getting the work installed required negotiations with an array of state bureaucrats, including the landmark authority and the ministry of culture.”

Memo to LA Times art critic Christopher Knight: You were mistaken when you wrote last week that “an impermanent permanent collection” – such as what is being proposed by the Los Angeles County Museum of Art … read more

I’ve always felt open to a wide range of influences in my music.  That’s not the right approach for everyone – some composers must focus on one or two strong influences – but it suits … read more

“As a new era of irrationalism dawns on humankind, with corruption and mendacity becoming a more or less openly avowed modus operandi of all shades of government, the Frankfurt analysis urges itself upon us once more.”

“As Mr. Gilbert prepares to leave, it is clear from interviews that things did not go quite as planned. … And it’s in doubt whether some factions of the organization really want change after all: The pathbreaking new-music happenings that marked Mr. Gilbert’s early tenure have been scaled back in scope and daring in recent years because of what he called, in a recent conversation in his studio at Geffen Hall, ‘financial pressures and, I would say, philosophical differences.'”

“[He] has expanded the mind-set of the Philharmonic – the major legacy of his tenure. His artistic priorities now seem embedded in the orchestra’s identity. It must champion contemporary music. … It must continue to appoint dynamic performers as artists in residence and give them a say in programming. It must regularly leave Lincoln Center to perform unusual programs in spaces large and small, from National Sawdust in Brooklyn to the massive Park Avenue Armory.” 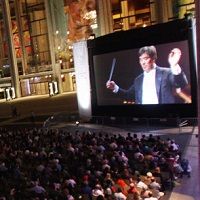