What computer scientists and neuroscientists are after is a universal theory of intelligence—a set of principles that holds true both in tissue and in silicon. What they have instead is a muddle of details. Eleven years and $1.3 billion after Henry Markram proposed his simulated brain, it has contributed no fundamental insights to the study of intelligence. – Wired

How does a university with a $6-billion endowment and $10 billion in assets suddenly find itself in a solvency crisis? How is one of the country’s top research universities reduced, just a month after moving classes online, to freezing its employees’ retirement accounts? – Chronicle of Higher Education

The Menil Collection’s octagonal landmark, which houses 14 of Mark Rothko’s black paintings, was closed in early 2019 for work that included reinforcing the walls, installing a digital lighting system and replacing the skylight to protect the canvases from sun exposure. The Chapel’s reopening, originally planned for June, has been postponed to September because of the COVID epidemic; there will be a “soft opening” in July. – Archinect

Philosophers have long concerned themselves with what they call “the paradox of fiction”—why would we find imagined stories emotionally arousing at all? The answer is that most of our mind does not even realize that fiction is fiction, so we react to it almost as though it were real. – Nautilus

Among the venues receiving the public this week are the Galleria Borghese in Rome, the Castello di Rivoli in Turin, and the Duomo in Florence — each with its own limits on visitor traffic, based on the building’s size and layout. Among the best bits of news is that the major Raphael exhibition at Rome’s Quirinale, which shut down only three days after opening in March, will resume from June 2 to August 30. – Artnet

It includes $100 billion for rental assistance, another round of $1,200 direct payments to taxpayers, and sets aside 25 percent of Paycheck Protection Program (PPP) loans for nonprofit organizations. However, the bill, known as the HEROES Act, has little chance of passing in the Republican-led senate and President Trump has promised to veto it. – Artnet

Charles McNulty: “While no virus can defeat this art form, the theater will have to change to meet the challenges of a transformed world. While we’re mourning the loss of playgoing among the myriad other losses exacted by this pandemic, I’ve asked artists to imagine the future. How might we rethink basic structures (economic, architectural, aesthetic) in this period of forced reprieve? How might fresh vision transform crisis into opportunity?” – Los Angeles Times

“I came to love this image, this mysterious, nameless village by a famous but nameless artist, long before I knew anything about art or criticism. I often wonder whether I would even pause for a second look if I were to discover it today, after having spent decades looking at and reading about paintings of this period.” – Washington Post

When new temporary rule changes for Oscar eligibility were announced in April because of COVID-19, Academy president David Rubin told Variety it was too soon to know how the 2021 Oscar telecast could change in the wake of the pandemic. – Variety

The 3,600-year-old, 6×5-inch clay fragment contains the section from the Epic of Gilgamesh in which the hero recounts his dreams to his mother. The U.S. Dept. of Homeland Security seized it from the Museum of the Bible last fall after determining that it had been illegally trafficked from Iraq; Hobby Lobby, which purchased the tablet for the Museum from Christie’s in 2014, is suing the auction house for fraud; Christie’s says that a unidentified dealer admitted to authorities after the fact that the tablet’s provenance documents were forged and may launch a suit of its own. – The New York Times

At the State Theater of Hesse in Wiesbaden, bass Günther Groissböck and pianist Alexandra Goloubitskaia gave a recital of Schubert and Mahler before about 200 people in a 1,000-seat auditorium — with plenty of hand sanitizer around the building and intermission snacks outside the front door. (Thank heaven the weather was good.) The audience, such as it was, “was ecstatic.” – The New York Times

Here’s a look at the safety measures which the Museum of Fine Arts, Houston has put in place for receiving visitors beginning this Saturday. The San Antonio Museum of Fine Arts is following soon after, opening to visitors next Tuesday and the general public the following Thursday. – Artnet

The company, which performs in Fort Worth and Dallas, is reducing its total budget from $10.8 million to $8.5 million, reducing dancer and staff pay on a scale from 5% to 20%, changing dancer contracts from 40 to 38 weeks, and postponing the start of next season until the holiday run of The Nutcracker, thus cutting programming from five to four productions. – The Dallas Morning News

“Executive director Mark Masuoka resigned from his position effective immediately after seven years leading the Ohio institution. The news came less than three weeks after ARTnews published nearly a half-dozen allegations of sexism, racism, and bullying under his leadership at the museum.” – ARTnews

“The corporation is actively exploring reviving the broadcast channel, four years after it was taken online-only, … after enjoying a run of hits – from Fleabag [and Killing Eve] to lockdown obsession Normal People – that have rated with the youth audience the corporation is desperate to win over.” – The Guardian

“Long ago, both jobs and respect were hard to come by for choreographers and dancers. This was especially true for women of color, as well as for modern dance. Respect went more easily towards ballet. I wanted to balance all my interests, to be in Denver and the world at the same time. When you find your true voice, the funding will follow.” – Dance Magazine

One of the most controversial acts in the ever-controversial life of Dmitri Shostakovich was his tortured decision in 1960 to join the Communist Party. It is not mentioned in Testimony (1979) – the composer’s influential memoirs, collaboratively written with Solomon Volkov. But Volkov offered his own view, for the first time, in a Zoom chat the other day produced by PostClassical Ensemble. – Joseph Horowitz

Rothenberg’s paintings are spare and stark—frequently understated in their color palette and simple in their form. But through even the vague suggestion of figures, Rothenberg was able to create memorable images that tease the brain and tickle the eye. – ARTnews 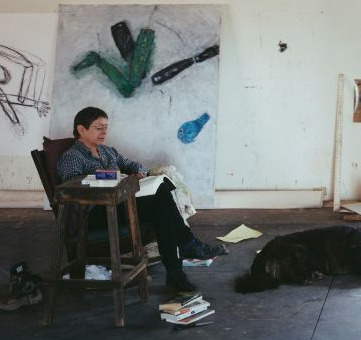