As one of her projects as artist-in-residence at the Museum of Old and New Art in Tasmania, Kirsha Kaechele has created a cookbook called (yes) Eat the Problem, full of recipes that turn Australia’s “invasive species from something hated into something delicious … that is, transforming a flaw into a feature.” – The Guardian

In a world where customers determine what’s relevant — not grantmakers, not executive directors, not board members, not staff members, and not artists — there is good news. Entertainment is relevant. – Medium

In addition to the flagship store on Lexington Ave., the company opened its first store in Philadelphia’s Rittenhouse Square last October. A second New York City store, which opened the following month, marked Shakespeare & Co.’s return to the Upper West Side after a 20-year hiatus. A fourth store, which originally was to have opened in Greenwich Village late last year, is expected to open soon. – Publishers Weekly

This music story has more sports metaphors than most sports stories, but let’s just run with it: Lang Lang got injured and could only perform one of the five concertos, and now, ‘four pianists are pinch-hitting: Conrad Tao, Beatrice Rana, Yulianna Avdeeva and Javier Perianes.” The LA Times spoke with all of them to find out how they’re handling this unexpected experience. – Los Angeles Times

Arkatov was “a child from Russia who landed in San Francisco, befriended violinist Isaac Stern — whose fame was still to come — took up the cello and decided to pour his life into making music.” He lived long enough to see the LA Chamber Orchestra’s 50th anniversary after it lived through a lot of adversity (and some earthquakes). – Los Angeles Times

The buildings of Dr. Maya Angelou Community High School was drab gray and green until Saturday, when the artists got to work. “The Maya Angelou school project, which includes prominent artists such as the all-female collective ​Ni Santas, the artist known as Rabi of the collective Cyrcle and French artist JR’s Inside Out Project, has undergone rigorous planning during the last three years, organizers said. Students brainstormed themes for the artists to work with.” – Los Angeles Times

No pressure, but if this movie doesn’t do well, Hollywood might force itself back into its (extremely long lasting, tight, and transparent) closet, or at least that’s the threat. “Rocketman trails glitter — a million Swarovski crystals adorn the costumes and eyewear — and depicts gay sex, a first for a major studio.” (In 2019, y’all. 2019.) – The New York Times

Here’s how the play’s director responded to a mild backlash: “All I was doing was trying to put on a show. … It’s a community theater and the community of people that showed up to auditions were cast in the show.” – Olean Times Herald (New York)

You know Flow. It’s a psychological idea that basically, psychologists say, describes “a state of engagement that arises when people are completely focused on an activity, such as tennis or rock climbing.” Turns out marketers know we get just as much into the flow of YouTube or Facebook – and that’s why we can’t quit. – The Atlantic

Google said it’s reviewing the orders; meanwhile, it’s complying. “The move could hobble Huawei’s smartphone business outside China as the tech giant will immediately lose access to updates to Google’s Android operating system. Future versions of Huawei smartphones that run on Android will also lose access to popular services including the Google Play Store and Gmail and YouTube apps.” – Reuters

Last year, the festival kicked off a 50/50 pledge – but there’s much work to be done, and the EU commission will gather Europe-wide data and report on best practices. As for now, a report says of France’s film reviewers who are women, “When they were writing, it was primarily for general interest or women’s magazines rather than publications specialized in cinema or culture, the report found. Men were significantly more likely to review thrillers, documentaries and action films.” – Variety

Jatra stars used to be major celebrities, but now they have to work second (or third) jobs to make ends meet. “Jatra originated in Bangladesh and the eastern Indian states of Odisha and Bihar. It’s a living and vibrant form of theater, usually performed on open-air stages, inspired by Hindu mythology, popular legends and contemporary events.” – NPR 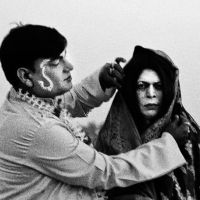