With the right hashtag, anyone can view thousands of potential destinations—and choose which to visit based on aesthetics alone. A single social-media post can expose lesser-known or isolated places to the world. And that means good places can no longer hide. – The Walrus

“It’s amazing that this landmark symphony could have been so easily forgotten. As with the other seminal New Englanders—George Whitefield Chadwick, Horatio Parker, and Edward MacDowell, among them—modernism killed off Paine’s music. And with the ascendancy of American vernacular forms, reflected in the music of Charles Ives, Aaron Copland, and others, any music arising from the German Romantic tradition could be ridiculed and ignored.”  – The American Scholar

“With her latest work, Fame Notions, [choreographer Gillian Walsh] seeks to understand what she calls the ‘fundamentally pessimistic or alienating pursuit’ of being a dancer.” Walsh explains to journalist Siobhan Burke in this Q&A. – Dance Magazine

“For an artwork that’s making strides around the world, On Display places remarkable value on motionlessness. ‘It’s a lot of stillness,’ creator-choreographer Heidi Latsky says of the piece, a movement installation — or human sculpture court — that incorporates performers with and without disabilities. Designed to demonstrate inclusiveness and ponder society’s fixation with body image, On Display has been mounted internationally, in different versions, more than 200 times.” – The Washington Post

Michael Shnayerson’s new book, Boom: Mad Money, Mega Dealers, and the Rise of Contemporary Art argues that contemporary art, once a thing artists made and dealers tried (unsuccessfully) to sell, has become a form of fiat currency for the very rich. – Bloomberg

“Prosecutors told a judge Thursday that they intend to retry Michael Rohana, 25, on charges of theft and concealment of an object of cultural heritage. Their decision comes a month after a jury failed to reach a unanimous verdict after a weeklong trial, stymied by questions of whether he had been appropriately charged.” – The Philadelphia Inquirer

They’re niche, and sometimes they include industry professionals, but also, they’re more than that. “These expanded horizons imply responsibility: ‘You know these meetings are a tryout. The people at them are gonna be your collaborators, your co-conspirators, the people you start businesses and families with.'” – The New York Times

For a podcast – transcribed here – writers Daniel José Older and Marlon James (Booker prizewinner for 2015) talk with creative writing profs about what genre even is, and why it’s better not to be a snob. Older: “They put up the series of two albums, that were Duke Ellington albums, and one of them was called Piano in the Forefront. And one of them was called Piano in the Background, right? And that’s how I think about some of these terms. It’s like, if the plot is foregrounded, if most of the time that we see them, they’re on their mission, and they’re trying to solve the crime or get the bad guy or do what they have to do, that’s going to feel, rhythmically, like a genre novel.” – LitHub

Seriously. There are small planets, Earth-sized planets, huge planets, and humongous planets. What there aren’t are planets that are 1.5-2 times as big as our Earth. Uh? Where are they? (No, this isn’t a Doctor Who episode, but it sounds like one.) – Wired

Will this start some dominos falling or reinforce the agencies’ intransigence? “Verve, a young Los Angeles agency focusing primarily on writers, is the biggest agency so far to make peace with the opposition, though it is far smaller than the four major Hollywood agencies that are at the center of the fight.” – Los Angeles Times

Hardline Hindu activists, empowered by the 2014 election of Narenda Modi as prime minister, have been doing things like this to plays they deem unpatriotic: “Hours before the show was due to start, the crew said they were forced to escape the venue as a mob had gathered. They said they ran down back alleys and had to take side roads to avoid being attacked on a main road. ‘It wasn’t that people didn’t like our play, expressed their dismay and left. No. We were being hunted across the city,’ said Ashwath Bhatt, an actor in the play.” – Reuters

Sebastian Smee: “What the sale of Koons’s “Rabbit” — an auction record for a living artist — is telling us with special force is that the question of valuation is not just about rationality or irrationality. It is, on a deeper level, redundant. It’s redundant because we are in a realm divorced from reality. Intentionally so.” – Washington Post

The UK-Based PledgeMusic owes hundreds of thousands of dollars to artists and labels, many of them independents operating on small margins. An untold number of fans have also been shortchanged, because the projects they invested in remain unfinished, or caught in limbo. “There have been no good outcomes here,” Benji Rogers, a co-founder and former CEO of PledgeMusic, wrote last week in an open letter, “and I cannot bear that something that I created to benefit artists and fans has caused so much pain to so many people.” – NPR

“Ballet Moves began in 2014 when the father of a young girl with Down syndrome asked if any of the classes suited her needs. The answer was no. But Julie Sunderland, who trained with Boston Ballet’s adaptive dance program before coming to the Cincinnati Ballet 11 years ago, said she would start one. … Two years later, the class expanded to children with other disabilities after Sunderland saw a Facebook post about a man with cerebral palsy who used dance to create new neurological pathways and help him walk. And now there are a few classes, for boys and girls, ages 4 to 14.” – Cincinnati Enquirer

“Gifts that are not in the public interest.” It is a pregnant, important phrase. Coming on the heels of similar decisions by the Tate Modern in London and the Solomon R. Guggenheim Museum in New York, the spurning of Oxy-cash seems to reflect a growing awareness that gifts to the arts and other good causes are not only a way for ultra-wealthy people to scrub their consciences and reputations. Philanthropy can also be central to purchasing the immunity needed to profiteer at the expense of the common welfare. – The New York Times

“[Garin Nugroho’s] Memories of My Body follows four stages in the life of Juno, a young boy in a Central Java village who becomes infatuated by the lengger lanang, a traditional dance that often has male dancers taking the role of female dancers.” Indonesian films with LGBT themes have been released in the past with little incident, but this one has been banned by cities, denounced by politicians, and garnered its director death threats. – The Guardian

Performing at a comedy club in Naples, Fla., “[Egyptian-American comedian Ahmed] Ahmed asked if anyone of Middle Eastern descent was in the audience. After a few people clapped, Ahmed replied, ‘Hey, it only takes one of us’ followed by a pause. As the audience began to laugh, Ahmed added ‘to tell a joke.'” One audience member decided this was a threatening joke about terrorism and called 911. (includes audio of 911 call) – CBS Miami

The six-painting series known as the poesie, commissioned by Philip II of Spain and based on Ovid’s Metamorphoses, were last displayed together in 1704. Five of them will be reunited and exhibited in London, Edinburgh, Madrid, and Boston in 2020 and ’21. (The sixth is in London’s Wallace Collection, which is forbidden to lend out its art.) – The Guardian

The rising young maestra was about to make her Montreal Symphony debut on May 15 when she and the orchestra got word that pianist Daniil Trifonov, the soloist for the concerto that formed the entire second half of the program, had just been taken to the hospital. So, as one of the musicians posted afterward on Facebook, “We performed Tchaikovsky’s Fourth Symphony. Cold. No rehearsing. In front of 2,000 ish people.” – CBC

The Song Company, a chamber group that has been performing repertoire from the medieval to the brand-new for 35 years, abruptly announced that it is entering (as it’s called in Australia) Voluntary Administration. While the ensemble’s board hopes to stave off liquidation and reorganize, all scheduled concerts after this weekend are cancelled. – The Sydney Morning Herald

M r. Pei was probably best known for designing the East Building of the National Gallery of Art in Washington and the glass pyramid that serves as an entry for the Louvre in Paris. – The New York Times

The Met’s now-defunct Sackler Enclave — a 600-square-foot office and storage space on the museum’s premises, named for the oldest brother, Arthur (who died before OxyContin was developed), run by his personal curator, and housing prime examples from his private collection of Far Eastern art — was arguably an infraction of museum ethics. – Lee Rosenbaum

The exact date is uncertain, but we know who was with Hubbard in this L.A. all-star band. They play “Ride With The Wind.” – Doug Ramsey

Two recent theater pieces take a hard look at one of the cultural rootstocks of the United States. – David Patrick Stearns

“In a peer-reviewed paper published in the journal Romance Studies, Gerard Cheshire, a research associate at the University of Bristol, argues the manuscript is … a type of therapeutic reference book composed by nuns for Maria of Castile, queen of Aragon, in a lost language known as proto-Romance.” – The Guardian

“A former mayor of Olomouc, [minister Antonín] Staněk made headlines several weeks back when he fired the director of the National Gallery in Prague, Jiří Fajt, and the head of Olomouc’s Museum of Art, Michal Soukup, accusing them of improper management. The domestic arts scene rose up almost in unison against the sackings.” (And then there was a disastrous interview last week.) – Radio Praha 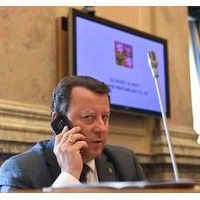