“For about 10 years, between the era of Shirley Temple in the 1930s and before Jerry Mathers appeared on TV’s Leave It to Beaver in the late 1950s, Joel Kupperman may have been the most famous child in America. From 1942 to 1952, he appeared almost every week on Quiz Kids, … [where] he would put on a scholar’s cap and gown and, with a panel of other genius-level children from Chicago, answer questions about mathematics, science, history, music, literature, sports and current events.” The experience was so painful that, as an adult, he refused to speak of it in any way. – The Washington Post

“Youths see [in speculative fiction] examples of young people grappling with serious social, economic, and political issues that are timely and relevant, but in settings or times that offer critical distance. This distance gives readers an avenue to grapple with complexity and use their imagination to consider different ways of managing social challenges.” – The Conversation

On the 1910 version of the painting, housed at the Munch Museum in Oslo, the cadmium yellow in the sky and the lake has been fading to off-white and flaking off for years, with light believed to be the culprit. A team of scientists has now found that light is not the problem: the dulling is caused by high humidity, particularly from the breath of many thousands of viewers. – CNN

Nearly all the jobs in this supersector involve some form of in-person services rendered for gatherings of people — which, of course, became impossible to maintain when social distancing requirements were put in place by local authorities. – FiveThirtyEight

At least for magicians. For instance, one new show, “with a stringent ticket allocation — only 25 Zoom logins per performance — felt more like pre-isolation theater than anything I have encountered in the past two months. (As a theater critic in withdrawal, this was unreasonably exciting.) Each ticket includes a ‘mystery box’ (a nod to Tannen’s Mystery Box, but this one comes with an alcohol wipe), which is sent to your home.” – The New York Times

It’s not as if the 8th graders will get another chance. The Olympics were postponed; the Spelling Bee was canceled. They have been working much of their entire (short) lives for this. Despite heartfelt pleas and online petitions, Scripps isn’t changing its mind. – Vice

No one – certainly not the federal government – will be saving the arts, it appears. And that’s horrible. Also, it’s time for all kinds of thinking. “How about we make possible something I have dreamt about for a long time: a bread-and-theatre initiative, i.e., deliveries door to door of bread (or other staples) accompanied by a little play offering? … How about phone plays for elderly folks and those without access to art that can stream into their homes?” – American Theatre

A computer playing the Goldberg Variations backwards sounds, yes, like a counter-counterpoint, but “at the same time, it sounds eerily familiar, starting with the upside-down Aria — the theme developed over Bach’s 30 variations. The slowly ascending notes in the lower staff of Bach’s original, which outline a G major triad, become, in the upside-down version, a graceful falling figure in the top line.” – The New York Times

One illegal downloader: “Just streaming is not enough, I mean, people want to watch those fresh, hot films that are just not on streaming.” – BBC

The Getty won’t open even though it has quite a few outdoor spaces, because those must be access from indoor spaces. But elsewhere: “The Huntington will institute a timed ticketing system, in which guests will pay for reserved slots in advance, so there won’t be any in-person exchange of money. Visitors will be required to wear face coverings, given hand sanitizer and asked to maintain social distance. The Huntington also is tweaking the flow of foot traffic so pathways don’t become congested.” – Los Angeles Times

Ballet dancers don’t know when they’ll perform again, or even when they can dance with others again (aside from those in their own homes). One advantage to online classes: Dancers can join them from anywhere. Two Pacific Northwest Ballet dancers “have enjoyed taking classes taught by dancers they know in other companies. ‘It’s cool how we can connect with friends that we wouldn’t be able to see in our normal jobs,’ Ryan said, calling it a ‘silver lining.'” – Seattle Times

Or, more usually, why writers instruct others to do it after their deaths. “The elemental annihilation of destruction by fire is so absolute, and this is where the horror lies for me. If writing is slow, quiet, creative work, burning pages is quick, loud, and flagrantly destructive. Where once there was something, afterward there is nothing. There’s something irresistibly dramatic about the act of applying a naked flame to the corner of a page and watching the paper disappear in a sheath of fire.” – LitHub

Carefully, with medical staff on set and stringent guidelines, and in one case, by essentially taking over a small town in Australia. “For Foster, who said that the extra precautions added at least 20 percent to the initial $10 million budget of his indie film, the most crucial decision he made was to house his entire cast and crew together, including the guardians for more than 25 child actors. He even quarantined an actor’s dog.” – The New York Times

Professional playwrights still need commissions, and honestly, people still need theatre even when we can’t go to the theatre, so: “Theater companies big and small across the country, including Berkeley Repertory Theatre, New York’s Public Theatre and the Kennedy Center in Washington, D.C., have asked dozens of professional playwrights to create short dramas for people to perform at home. The play scripts, part of a new initiative called Play at Home, have been downloaded 20,000 times since the start of April.” – KQED

If you’re a Janeite, you already know this. If not, truly: “To be a woman of a certain class in Regency England was to be socially distanced by default—isolated in the country-side, living at the pace of the seasons, beholden to restrictions set by others (namely, men). Set aside the reasons for being confined and we’re left with a defining commonality: the need to fill our days at home.” – Time Magazine

Jayne Blanchard isn’t into the National Theatre’s (wildly popular) streams. She’s not thrilled with the general flatness of screens compared to, well, face to face. It is, he says, mostly like “looking at the striking stage effects, lighting and choreography and thinking ‘This must be amazing in real life.'” – DC Theatre Scene

A funny, sweet message from a theatre in Oregon caught on with the Instagram crowd, and it’s not the only one. Its creator, who says his small movie theatre provides a true home for cinephiles during non-quarantine times: “The fact that it did catch on made me happy because it essentially showed there’s a place for more hopeful messages; that dark humor isn’t the only way we can express ourselves.” – The New York Times

With 93 percent of those polled saying they miss live theatre, it’s perhaps a surprise that only 19 percent of those polled said they would buy tickets immediately when theatres and other live performance venues reopen. Or perhaps that’s just grim reality. “Most (74%) cited the buzz of live performance as the thing they missed most, with other popular choices including seeing performers they admired and supporting local venues.” – The Stage (UK)

Delsarte’s large-scale public murals are his best-known works, but he also painted and created drawings and prints. His murals, though, they’re the ones that everyone in New York (and elsewhere) knows. “‘Whenever I see Louis’s work, I see a bunch of black people looking good, from anywhere and everywhere in the diaspora,’ said Arturo Lindsay, an artist and professor emeritus of art and art history at Spelman College in Atlanta. ‘Just showing black people looking good and happy is a hell of a political statement.'” – The New York Times

Author Robin Sloan: “I think you need to tread lightly, and really disguise your intentions—even to yourself, if possible—or you end up producing a sci-fi after-school special, the ‘moral of the story’ written in towering letters of flame.” – The Atlantic

At Tanglewood, “the organization explored various alternatives to canceling the season, at one point sending a drone up above the expansive lawn to think about how social distancing might work. But with the thousands of people who congregate each summer in lines to the bathrooms and walk back to their cars at the end of the evening, … it just wasn’t feasible.” The economic pain will be widespread in the Berkshires. – The New York Times

“Seeing ourselves as pitiable requires rethinking fundamental ideas about America’s history, purpose and destiny. It obliges us to do something that is intolerable, to accept our weakness, even impotence, in the face of larger forces.” – Washington Post

There have been rumors in London’s government and business circles that the Conservative government will make major changes to the Department of Culture, Media, and Sport next month — and the DCMS is refusing to confirm or deny that it will be reduced in scope or made redundant. The rumors range from simply moving digital and telecom matters into another department to downgrading culture to a portfolio under a different cabinet minister. – Arts Professional (UK) 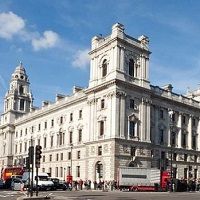