It makes sense. As iconic architectural spaces that are mostly free to enter, museums have a lot to offer today’s media-savvy protestors. – Museums Association

“There is growing presence, visibility and representation of [Black, Asian, and Minority Ethnic] artists, as well as a vision that they should be part of the mainstream. … However, we now need to move beyond visible representation to look at who is commissioning, directing, producing and programming the work of BAME artists.” – Arts Professional

“A [dance instruction] programme in Stockton-on-Tees has helped young people excluded from mainstream schools learn new skills, develop self-worth and show others what they can achieve.” – Arts Professional

Music streaming services such as Spotify and Apple have notoriously bad interfaces for classical music. The problem is meta-data, the absence of which makes it difficult to properly search. Now Idagio, “launched in the United States and Canada last fall, is a new streaming service focusing solely on classical recordings—but focusing on doing it right.” – Vogue

Ian McEwan: “The ancient dream of a plausible artificial human might be scientifically useless but culturally irresistible. At the very least, the quest so far has taught us just how complex we (and all creatures) are in our simplest actions and modes of being. There’s a semi-religious quality to the hope of creating a being less cognitively flawed than we are.” – Edge

“The combination of necessary professional arrogance, high hopes, and even bigger disappointment has allowed conspiracy theories to gain currency among the musicians who feel cheated by Evangelista.”  – Van

“The age of 58 — and whether a member is older or younger — is the generational divide between donors who want more on-demand programs and those who are less likely to know that those programs are even available. It also correlates to how much members are willing to pay and what would inspire them to pay more.” – Current

Americans for the Arts CEO Robert Lynch says that his organization’s Arts + Social Impact Explorer “consolidates and highlights concrete ways in which the arts intersect with and have an impact on other sectors of society … [how, for example, the arts] help people with cancer cope with stress through painting, assist people with Parkinson’s increase their vocal strength through singing, and support patients undergoing treatment or unable to leave their beds with live, in-room performances.” – Inside Philanthropy

A separate internet for some, Facebook-mediated sovereignty for others: whether the information borders are drawn up by individual countries, coalitions, or global internet platforms, one thing is clear – the open internet that its early creators dreamed of is already gone. – BBC

Completed in 1962, the year after Saarinen died, the Flight Center was considered a triumph of architecture and engineering. But it proved impractical as planes got bigger and airport security tighter. It was abandoned in 2001 and robbed of some of its autonomy a few years later, when JetBlue built a large new terminal behind it. – Architectural Record

The O-category visa includes a range of professions, however arts presenters across the country report an uptick in rejected visa applications. Most recently, two dancers from Russia’s famed Bolshoi Ballet were denied temporary entry to perform at a fundraising gala for a youth dance competition. – KUOW Seattle

“Over the years, rumors of possible successors have surfaced and vanished, as [the now-98-year-old] Ms. Alonso, at least partially blind since the 1940s, talked of living to 200. But her grip has finally loosened. In January, the Cuban ministry of culture appointed Viengsay Valdés, the Ballet Nacional’s 42-year-old prima ballerina, as the troupe’s deputy artistic director … She is now responsible for all artistic decisions: programming, casting, promotions.” – The New York Times

“Bulldozers are already scraping clear millions of tonnes of earth in Chinchero, a picturesque Inca town about 3,800 metres above sea level that is the gateway to the Sacred Valley.” Says one Peruvian art historian, “This is a built landscape; there are terraces and routes which were designed by the Incas. Putting an airport here would destroy it.'” – The Guardian

Sold for $91.1 million, “Rabbit, a stainless steel casting of an inflatable rabbit, was the star of [Christie’s] spring sale and overtook the previous record set by British painter David Hockney’s Portrait of an Artist (Pool with Two Figures), which sold last November at Christie’s for $90.3 million.” – Yahoo! (AFP)

“In a bankruptcy filing on Tuesday, lawyers for the studio … said it was burning through what little cash it had left. … The Weinstein Company has been negotiating for more than a year with insurers, creditors and women who have sued for compensation for abuse, and the filing could be legal maneuvering intended to speed up a resolution.” – The New York Times

In 2006, weary of the endless political battles over the NEA and worried about the cuts to its funding, the Ford, Prudential, Rockefeller, and Rasmuson Foundations joined forces to create a private-sector equivalent, United States Artists. Says former chair Susan Berresford, “There was an idea that outside the government, there could be an endowment to free yourself from understandable political pressures [in order] to take some risks.” – New York Observer

“A prolific actress who appeared in plays, television series and more than 80 films, … she was among Japan’s earliest on-screen sex symbols, known for playing elegant and assertive princesses, noblewomen, geishas and prostitutes. Her performances marked a striking departure from traditional roles for Japanese actresses.” – The Washington Post

“Given the gravity of recent events,” said the CEO of the ITV network in a statement, “we have decided to end production of The Jeremy Kyle Show.” The grave recent event was the death of a 63-year-old man a week after he failed an on-camera lie detector test while claiming that he had not cheated on his girlfriend. – The New York Times

Journalist and playwright Farai Mabeza gives a survey of the sector and the ways its artists have been opening windows on the society’s social and political problems despite a severe lack of financial resources. – HowlRound

“The moves reflect the growing outrage over the role the Sacklers may have played in the opioid crisis, as well as an energized activist movement that is starting to force museums to reckon with where some of their money comes from.” – The New York Times

The company expected to deliver “Bhutto” — a dramatic treatment of the history of Pakistan’s Bhutto political dynasty — this coming November. However, “Bhutto” has been removed from next season’s lineup and put on hiatus primarily due to lack of funding, according to the opera. – Pittsburgh Post-Gazette 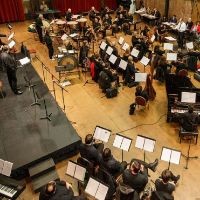