“With a list of conditions that will leave most venue operators scratching their heads, venues can reopen on the basis that a maximum of 30 people – including staff – are allowed in at any one time and they remain 1.5 meters apart. A reservation system must also be in place, with no walk-in customers admitted. Venue owners must discuss potential risks with visitors before they enter. The maximum number of visitors to cultural institutions will be increased to 100 in the following stage of the plan from 1 July, if the virus is kept ‘under control’.” – IQ Magazine

Meritocracy begins with the idea that people have to be measured on a scale of human value. So when we have decided that meritocracy is the way into higher education — or in particular into government, via higher education — it becomes an essential problem, because participation is then premised on the idea of achievement on a hierarchy of values which you may or may not have subscribed to in the first place. – Chronicle of Higher Education

“[He was] one of the four founders of Visual AIDS and an organizer of the first Day Without Art … [and] his nearly four-decade career in museums included tenures at the Grey Art Gallery at New York University and the Andy Warhol Museum in Pittsburgh and concluded with a position, taken in 2017, as director of the Jane Voorhees Zimmerli Art Museum at Rutgers University, New Brunswick.” – Artforum

Most kinds of longing can be settled in one way or another, if not necessarily to the satisfaction of the yearner. Nostalgia can only be lived in or abandoned: it is yearning distilled to its essence, yearning not really for its own sake but because there is nothing else to be done. – The Walrus

Assuming the captions are at all accurate, these images — until recently only accessible by trudging through the archives date by date and document by document — can be searched for by their contents, like any other corpus. – TechCrunch

Domhnaill Hernon: “I believe that the arts could be (should be) more transformational in the way they inform more human-centric design. I believe that the arts should be deeply integrated into all companies but especially technology companies. I believe it is critical that the voice of the artist be heard and taken seriously in the context of business and in understanding the role that technology can play in influencing humanity. It is the role of companies to understand and embrace the unique perspectives of the artists, and it is the role of the artist to better understand the needs of industry.” – Americans for the Arts

With Miguel Harth-Bedoya stepping down after 20 “transformational” years, Tim Diovanni talks to musicians and observers about potential successors and finds that there is, as yet, no clear favorite. – The Dallas Morning News

We should not fear being bored, say psychologists James Danckert and John D Eastwood, the authors of Out of My Skull: The Psychology of Boredom. Their research has revealed boredom to be widely misunderstood, perhaps even unfairly maligned. Boredom evolved to help us, says Danckert. It signals that we are unengaged, in need of an activity to satisfy us. “I think that’s a good thing, in a lot of ways. How we respond to it is up to us. I think you can minimise it. But do you want to totally eliminate it? I don’t think you do.” – The Guardian

“The best analogy I can provide is the changes we’ve seen in travel since 9/11. Once it was clear that security screenings were here to stay, new airports were designed with that reality in mind. There is no finer example than the airport in Indianapolis where space for screening was designed into the original plan and has contributed to the airport being chosen as one of America’s ten best year after year. Contrast that with Newark Airport where security has been shoe-horned into hallways and gate areas that were not designed for it and aren’t the least bit conducive for it either. Nearly every performing arts venue of any scale in the world is the equivalent of Newark Airport.” – Dance Enthusiast

He said the coming months should be ones of “learning and culture,” as opposed to travel and leisure. (France has also imposed limits on international travelers for the summer months). He added that artists would need to invent new forms of culture, saying that “nothing prevents us from inventing something else, in smaller forms with no public or little public.” – Artnet

Some, like A24 and Sony Pictures Classics, are sticking with the existing theater-first model and waiting the COVID lockdown out; says a top Sony exec, “Without theatrical, the business disappears.” Yet some smaller distributors “have seized an opportunity to release their films as digital links, often through art-house and independent theaters that have eagerly accepted a chance to earn some revenue and keep their homebound audiences engaged.” (Alamo Drafthouse, meanwhile, is launching its own streaming platform.) – The Washington Post

“Officials from Egypt’s antiquities ministry recently announced that [four] ram-headed sphinxes had been taken from the Karnak temple in Luxor to the capital’s busy traffic roundabout, where they have joined a pink granite obelisk.” Egyptologists say that the sculptures will be damaged by Cairo’s air pollution, while government critics say it’s a move to erase Tahrir Square’s recent history as a protest site. – The Guardian

“Since mid-March more than 70,000 extra creators have joined Patreon, which allows fans to give monthly payments to artists in exchange for exclusive content or simply out of a desire to support someone whose work they appreciate. The artistic influx has been matched by an equally large increase in supporters. … the number of whom is up 25% month on month. Over the same period, spending by existing patrons has increased by 75%.” – The Guardian

A 5.4 magnitude temblor hit the Croatian capital, Zagreb, in late March. “Over 80% of [the city’s] museums are in buildings that date from before the Second World War and most of them have reported serious damage, but the aftershocks and lockdown have stopped detailed inventories of the destruction being made. More than a third of them are identified as unsafe or dangerous.” – The Art Newspaper

“The ‘nominal’ payment will apply to all the productions the National has been streaming on YouTube since early April. The venue said it was up to the artists whether they chose to accept it.” – BBC

Police officers in Spain recovered several rare pre-Columbian objects at Madrid’s Barajas airport, including a unique Tumaco gold mask, gold figurines and pieces of ancient jewellery. All had been illegally acquired by looting in Colombia. – The Guardian

With author events cancelled, titles delayed and bookshop sales severely hit by lockdown, the survey of 72 small publishers reveals almost 60% fear closure by the autumn. The Bookseller said that 57% reported they had no cashflow to support their business, and 85% had seen sales drop by more than half. – The Guardian

“We will ultimately return to enjoying such collective experiences – as they “appeal to the human nature” – but only after most people in the country have either been infected with the disease (herd immunity), or inoculated (vaccines or combinations of drugs) in some way. In “the near-term”, he says, “it’s just not going to happen. I think this year is basically a write-off, if I’m honest with you,” he adds. – BBC

Before the coronavirus crisis, the drive-through had been fast losing status, often deployed as a symbol of obesity and the worst of car-dependent urban design. In many cities, it had been subject to outright bans. The drive-in, meanwhile, is nearly extinct, with just a few still operating in Southern California. But during the pandemic, drive-throughs have become a weird sort of societal glue. And the drive-in has been reconsidered. – Los Angeles Times

The Television Academy ruled in March that effective in 2021, programs that have been nominated for an Oscar will no longer be eligible for the Emmys competition.” says the TV Academy in a statement this morning. – Deadline

The theatre historian J. Leeds Barroll III, who carefully sifted through the surviving records, concluded that in the years between 1606 and 1610—the period in which Shakespeare wrote and produced some of his greatest plays, from “Macbeth” and “Antony and Cleopatra” to “The Winter’s Tale” and “The Tempest”—the London playhouses were not likely to have been open for more than a total of nine months. It is all the more striking, then, that in his plays and poems Shakespeare almost never directly represents the plague. – The New Yorker

That’s what happened in the depression. “What prompted this public investment in higher education was neither sentimentality about the poor nor a noblesse oblige of good works. It was a vision of culture and social wealth, derived from the activism of the working classes and defended by a member of Britain’s House of Lords.” – The New Yorker

Before the shutdown, the museum had around 960 staff members, director Glenn Lowry said. Through a combination of voluntary retirement packages and general attrition, the new staff count will be about 800. “We will learn to be a much smaller institution,” he said. The museum administration also took what Lowry described as a “chainsaw” to its exhibition budget, cutting it from $18 million to $10 million for the fiscal year that begins July 1 and runs through June 30, 2021.  It also cut its publications budget by about half. Overall, the museum will have slashed its annual budget to about $135 million, from close to $180 million. – Bloomberg 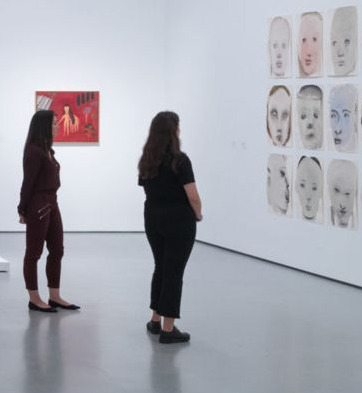