“At the heart of the Globe are, for me, two things. First the £5 ticket for the yard. Over the last twenty years that single fact has given over five million people an extraordinary experience for less than a sandwich costs. They have seen Mark [Rylance] in his pomp, Gemma Arterton’s Rosaline, Gugu Mbatha Raw’s Nell Gwynn, Roger Allam’s Falstaff, Eve Best’s Beatrice and Cleopatra, and countless others for only £5. It is a miracle.

“Consciousness, we can tentatively conclude, is not a necessary byproduct of our cognition. The same is presumably true of AIs. In many science-fiction stories, machines develop an inner mental life automatically, simply by virtue of their sophistication, but it is likelier that consciousness will have to be expressly designed into them.”

“You will not mess with my First Amendment, my Bill of Rights, my Declaration of Independence, my Constitution. I underline the ‘my’ in terms of the way I feel about it. That’s the way this country was born, that’s what it’s dedicated to. It has not served up equal justices yet, … but under the law, we are promised equal justice under the law, equal opportunity. So I think that’s as conservative as you can get.”

Angelina Avallone (War Paint) explains it all to (and tries out some of it on) the previously clueless Kurt Andersen. (audio)

“Literature certainly reflects the preoccupations of its time, but there is evidence that it may also reshape the minds of readers in unexpected ways. Stories that vault readers outside of their own lives and into characters’ inner experiences may sharpen readers’ general abilities to imagine the minds of others. If that’s the case, the historical shift in literature from just-the-facts narration to the tracing of mental peregrinations may have had an unintended side effect: helping to train precisely the skills that people needed to function in societies that were becoming more socially complex and ambiguous.”

Daan Roosegaarde’s Smog Free Tower, which can reportedly clean up to 30,000 cubic meters of air per hour, has been tested in Rotterdam and will be installed in public parks in Beijing.

“To listen to and to play or sing Western art music is now a counter-cultural act. It is an act of profound rebellion against our politically correct Cultural Marxist zeitgeist as well as being a source of pleasure, moral and spiritual improvement, and enhanced appreciation of the connection between the human and the divine. Let us not be afraid to relegate pop music to its proper place, to embrace our Western art music heritage and to resolve to make it a central part of our lives as educated men and women.”

She suggested that younger actors were not curious. “It is not laziness, it is just non-curiosity. I think it is terribly important to know that whole history of theatre we have, why you’re in it, what people did before, the lives of actors.”

David Cote: “Nobody seems able to answer the question of how you can make theatre criticism more appealing, more clickworthy. One answer is to be a goddamn flamethrower every week, be a bomb thrower, to write scorched-earth reviews. Just be completely hedonistic and ego-driven in your criticism, become a master stylist, and treat everything in front of you onstage as fodder for your most delicious and vicious language. That’s one road. And people may enjoy your writing. The thing that’s sacrificed is any sense of a larger responsibility, and any aesthetic consistency.”

“What we’re fighting for is for studios and networks not to be able to hold writers for six straight months [between seasons without pay]. You’re just in career limbo. The companies are making more money than ever before, and it just feels like the writers who are creating all this content are becoming less and less valuable.”

“These days, the opera field itself is effectively sabotaging the argument that voice type comes first. Opera is increasingly trying to present itself as just another form of drama, a musical equivalent of spoken theater or film, with its cinematic broadcasts and emphasis on younger, more attractive performers. That argument is problematic: Opera isn’t, in fact, equivalent to a TV show and doesn’t hold up well in the comparison; its strengths lie elsewhere. But if you’re going to make that argument…”

Sales of children’s books rose 16% to £365m, with the increase due mainly to the purchase of printed works. Readers also flocked to fitness and self-help books, sending non-fiction sales up 9%. Revenues from fiction fell 7%, the PA’s annual report said.

“Since our members are funding these films, they should be the first to see them,” the company said. “But we are also open to supporting the large theater chains, such as AMC and Regal in the US, if they want to offer our films, such as our upcoming Will Smith film Bright, in theaters simultaneous to Netflix. Let consumers choose.” At first glance, this might seem like a reversal: Netflix is open to putting its movies in theaters! Theaters win! When you look at it more closely, though, it’s clear that nothing’s changed. “We are also open to supporting the large theater chains,” the company says, and it’s hard not to note that word choice; it doesn’t exactly suggest the kind of partnership with distributors that exhibitors would like to have.

Hemingway’s bizarre behavior in his latter years (he rehearsed his death by gunshot in front of dinner guests, for example) has been blamed on iron deficiency, bipolar disorder, attention-seeking and any number of other problems. After researching the writer’s letters, books and hospital visits, Farah is convinced that Hemingway had dementia — made worse by alcoholism and other maladies, but dominated by CTE, the improper treatment of which likely hastened his death.

The five “key creatives” for five shows up for best musical dish about the process. “The [studio-driven musical] is just a very different world. It’s a stable of people with properties that are trying to figure out what to do with them. Many of the ideas are very possible. And some of them are idiotic. I listen to what everyone here is saying about all the ideas they could come up with from scratch and think: ‘It must be lovely.’ It’s like I’m watching a zoo.”

When the screen cartoonists’ guild formed in the late 1930s, animated shows weren’t scripted and instead were drawn out on storyboards. Because that was considered part of the animation process itself, the writers were placed under the jurisdiction of the cartoonists’ guild, said Tom Sito, a USC film professor and former president of the Animation Guild, IATSE Local 839. That dynamic has more or less continued to this day, even though today’s cartoons involve plenty of scripting.

In the mid-70s, Luft was “hired as the director of dance programming, arts and culture for the Montreal Olympics. During the Games, he organized 100 dance performances in the city, bringing in performers from all across Canada. After the Olympics, Mr. Luft worked as the director of Quebec’s nine conservatories of music and drama and in 1978, he also co-founded the artists agency Specdici. At the agency, he was instrumental in promoting emerging dance companies, including La La La Human Steps, Les Ballets Jazz de Montréal and dancer-choreographer Margie Gillis, to an international audience.”

National and even international attention has been focused on music director searches in Eugene lately because three of the last four people on the podium — Marin Alsop, Miguel Harth-Bedoya and Giancarlo Guerrero — have all gone on from their jobs here to national prominence. 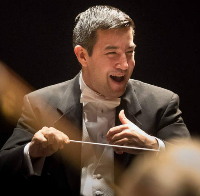