Clayton Patterson’s importance in general, but especially on the Lower East Side of New York City, comes from his commitment to social and political values for the good of his community. He has put his life on the line to document and preserve it in a way that few are brave enough to do. – Jan Herman

The American writer—so goes the transatlantic stereotype—addresses the general public deliberately and democratically. Rapidly clarifying her argument and the research or experience behind it, she (over)emphasizes how little she takes this audience’s trust and attention for granted. By a contrasting convention, the European essayist makes his genre and theme seem almost accidental. – Public Books

Julie Kent, who played Kathleen: “I do remember talking to Nicholas [Hytner, the film’s director] at the audition about why he wanted to do this movie. . … He said he loved the art form, and the film company had done all this research, and they really felt that this movie was going to speak to an audience of teenage girls and their moms—this was going to be very impactful for a whole generation. Clearly, that was true!” – Dance Spirit

A 2016 survey of top AI researchers found that, on average, they thought there was a 50 percent chance that AI systems would be able to “accomplish every task better and more cheaply than human workers” by 2061. The expert community doesn’t think of artificial general intelligence (AGI) as an impossible dream, so much as something that is more likely than not within a century. So let’s take this as our starting point in assessing the risks, and consider what would transpire were AGI created. – Nautilus

Mark Harris: “So forget the movies — he certainly has. What remains is the man, and on that score, Apropos of Nothing is one of the most unsettling accounts of a life I ever hope never to encounter again. … From its first pages, what is meant to amuse is as discomforting as steel-wool underwear.” – Vulture

Shortly after the pianist abandoned live performance for good, he started making nonfiction radio programs for the CBC, the best-known of which are called the “Solitude Trilogy”: The Idea of North (about life in sub-Arctic Manitoba), The Latecomers (Newfoundland outports), and The Quiet Land (an isolated Mennonite community). The voices of those he interviewed are “intertwined as though contrapuntal voices in a Bach fugue or suite. Several could be sometimes be heard at once, each artfully edited, syllable by syllable, so that their rhythms made a certain sense as one emerged and another faded.” – Los Angeles Times

“It will be a while before we can accurately assess whether jazz indeed has suffered more losses, proportionately, than other art forms. Yet the tragedy of so many major figures dying of the disease in such short order says a great deal about the jazz world’s perils and vulnerabilities.” – Chicago Tribune

“Its vast army of 1,800 artists relies on international travel to get from show to show, regularly crossing borders, performing on cruise ships, and interacting with fans. Daily training regimens require constant physical contact. The entire operation depends on an intricate logistical network of cargo ships, trucks, hotels, and food-service businesses, all of which have ground to a halt. In effect, government bans on large gatherings are a ban on Cirque itself, leaving a company that generated an estimated $950 million last year with essentially ‘zero revenues'” and debt that S&P and Moody’s have now assigned junk-bond status. – Fast Company

Earlier this week, Helen Shaw wrote that the Broadway.com stream of Jonathan Tolin’s Buyer & Cellar was “the proof-of-concept for low-budget live-capture.” So she talked to the people who made it happen — director Nic Cory, star Michael Urie, director of photography (and Urie’s partner) Ryan Spahn, digital director (and Broadway.com editor-in-chief) Paul Wontorek — about the details that really made it work (including the ones they learned the hard way). – Vulture

“Today, as the pandemic reshapes the ways we understand our work life and its meaning, Terkel’s supermarket workers would be classified ‘essential’ to the smooth continuity of society. Yet they would also receive modest wages (at best) and come to work knowing that they will be exposed daily to COVID-19. It’s doubtful being ‘essential’ would leave them feeling any more valued. Or as Working described it nearly a half century ago, many of the workers who keep this country humming are the same people we regard as social wallpaper and take for granted.” – Chicago Tribune

What, the guy who wrote all those pops-concert pieces like The Typewriter, The Syncopated Clock, and Sleigh Ride? Yes, says Anthony Tommasini: “Bach provides solace, Beethoven stirs us with resolve and Brahms probes aching emotional ambiguities. But trust me: Leroy Anderson will make you feel better about things.” – The New York Times

In Germany, it’s a state-by-state process: small museums in Brandenburg are reopening this week, with Thuringia next week, Saxony and Berlin in early May and the rest of the country following. Austria’s museums will open their doors in mid-May, though larger ones such as the Belvedere may wait as late as July. Distancing procedures and other safety measures are being developed with Teutonic thoroughness. – ARTnews

As we know, American society and politics (especially in Congress) are very different in 2020 than they were in 1934. Even then, there was political opposition to the very idea of arts funding and suspicion of artists as dangerous leftists. Julia Jacobs looks at that opposition, then and now. – The New York Times

“In a long film, television and stage career [she] earned two Oscar nominations while still in her 20s, won a Tony Award in 1975 and later garnered three Emmy Awards.” – The New York Times

Do you consider your organization’s deepest responsibility to be to art or to people? I don’t mean what is your mission. Rather, in extreme instances, what is most important? If many in your community are hurting is your focus on art? – Doug Borwick

Considering his long, illustrious career as an art scholar and museum director, not to mention his generosity in sharing his deep insights with others (including me), I’m puzzled as to why there’s been so little mention of his death last week. – Lee Rosenbaum

“Abigail Disney, an Emmy award-winning film-maker and a granddaughter of the company’s co-founder Roy Disney, launched a Twitter tirade against the world’s biggest entertainment group … for protecting executive bonuses and dividends of more than $1.5bn while cutting the pay of more than 100,000 workers to help weather the financial impact of coronavirus.” – The Guardian 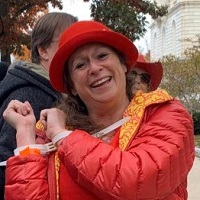