“Who knows if the paintings I donated hold beauty in the harsh, isolated world of incarcerated people? I never ask these viewers directly; in prison, this question can beg answers like, “Your paintings? I love them. Get me out of here!” I wasn’t doing research, and didn’t need to know. The paintings just became part of the prison. It wasn’t until after teaching there that I got any sense of the paintings’ meanings in their context.” – Broad Street Review

Social media influencers have had increasing… er… influence in recent years for their ability to get advertising messages out to their followers. But the COVID lockdown has crashed the market. And there’s even been backlashes to influencers who seem to be flaunting their enviable circumstances while the rest of us are stuck inside our apartments. – Wired

Fear of and distancing from those who have or are suspected of having the virus counts as a similarity, the key difference being how AIDS became linked to identity . “In the early days of AIDS, all forms of contact were made fraught. I remember people going home and being told that they were not welcome.” – ARTnews

“Is dystopian fiction likely to affect anyone’s real-world political attitudes? If so, then how? And how much should we care about its impact? In our research, we set out to answer these questions using a series of experiments.” – Aeon

“What is a choreographer without a stage but a sad clown of God at a time like this? So Morris has retooled himself as a filmmaker. … There is a certain hallucinatory, Fellini-esque quality to this scene, where a giant of the dance world struggles to master the same awkward video technology that remote office workers are using to teleconference. And where top dancers are limited to a few feet of floor space and bad lighting, using bathroom doors as stage wings.” – The Washington Post

One major takeaway: Most theatregoers will not immediately be ready to return to theatres even when they reopen. The survey found that around half (49 percent) of those questioned say they will likely wait a few months before returning. Only 25 percent think they would attend right away. – American Theatre

“Theatre finance departments have been in an all-hands-on-deck mode as they gather payroll reports and compile the information needed for [CARES Act aid] applications. It’s been a round-the-clock undertaking, with some portals to loan applications opening as late as midnight, others in the early morning hours. Work-from-home days are stacked with meetings and calls with bankers, investors, and board members. Funds are being awarded on a first-come, first-served basis.” – American Theatre

His American Place Theater staged important early work by the likes of Sam Shepard, Maria Irene Fornés, Eric Bogosian, and the poet Robert Lowell, but “his greatest hits, it might be said, were the actors who came through his classes, which he began teaching in the 1950s” — among the many were James Caan, Joel Grey, Faye Dunaway, Richard Gere, Dustin Hoffman, and John Leguizamo. Even at age 97, he was still leading classes. – The New York Times

“Though many libraries have sent workers home, with pay, several systems in states like Texas, Massachusetts and Colorado have required at least some staff members to keep coming to work. This has prompted criticism from some librarians, including those whose systems have made different arrangements.” – The New York Times

The five remaining regular-season concerts are being rescheduled (with some change of program) to August and September, and 2020’s Summer at Orchestra Hall (formerly Sommerfest) will be postponed to 2021. The orchestra’s 2020-21 season is expected to open as usual in late September. – St. Paul Pioneer Press

“But, in typical Cannes style, the festival did not close the door entirely. Instead of canceling outright, organizers said they are exploring contingencies to make ‘Cannes 2020 real, in a way or another’ and have begun discussions with members of the industry in France and abroad to do so.” (The Cannes Film Market, however, has made the decision to go virtual in June.) – The Hollywood Reporter

Even with so many Beethoven 250th-birthday concerts being cancelled, the world needs to hear pieces of his that haven’t already been played a zillion times. This one is solid, perfectly engaging — and performed by musicians that are among the best out there, even if we’ve barely (yet) heard of them. – David Patrick Stearns

In order to divert those of you who, like me, are staying home these days, I’ve been posting images from what a friend calls “the Teachout Museum.” The latest is of a 1990 lithograph by Joan Mitchell, an artist for whom my feelings have grown progressively stronger. – Terry Teachout

For his recent collection Common Practice, pianist and composer Ethan Iverson has put together a quartet with bassist Ben Street, drummer Eric McPherson, and trupmeter Tom Harrell at a peak of imagination and inventiveness remarkable even by his high standards. – Doug Ramsey

The 82-year-old, suffering from dementia, was last seen on March 31, walking the grounds of his cliffside oceanfront property near the eastern tip of Long Island. – The New York Times

Organizers called off the festival, scheduled for July 3-23, within minutes of an announcement by France’s President Macron that, because of the COVID epidemic, it would be unsafe to hold major summer events until at least mid-July. – France 24 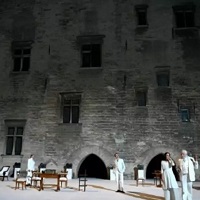